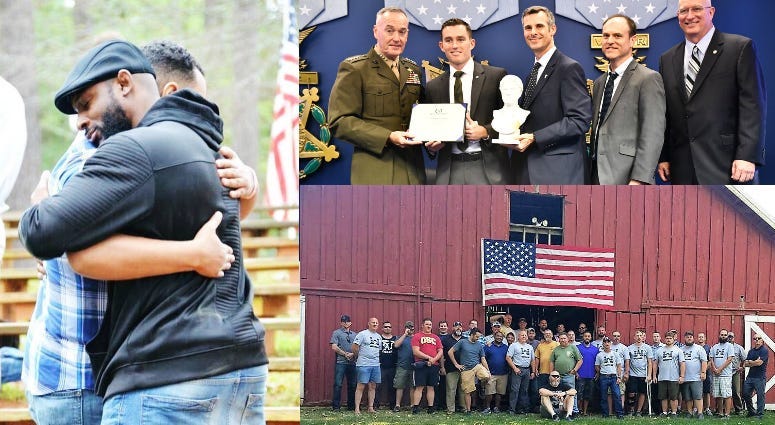 James Ferguson isn't all that interested in the big Marine Corps reunions. While he shares a common bond with every Marine, if he was going to a reunion he wanted it to be with the Marines of India Battery 3/12.

"The only people, often, that you can talk about those things with in a completely unfiltered way are the people that were there with you," Ferguson says. "Because they get it. You don't have to explain yourself, you know they understand. They were right there next to you."

Ferguson brought his unit back together in May 2015, five years after their deployment. He planned on it being a one-off for his unit, and if it went well, maybe he'd do it again in another five years. It went better than he could have imagined and was such a powerful event he decided to look in to helping others do the same. Soon, Ferguson would found the Warrior Reunion Foundation (WRF) a non-profit that puts on, and pays for, reunions of units that saw combat together.

So how does it work? Ferguson says getting started is as simple as filling out a form on the WRF website or picking up the phone and calling. The foundation takes care of all costs, except for travel, and each reunion features a ceremony for those lost in combat, and after returning home. Beyond that, when it comes to what happens at the reunion, the sky is the limit.

"We've had skeet shooting competitions, archery and hatchet throwing, pugil sticks," Ferguson says. "Whatever the unit wants to do, the only limit is their imagination and how much time we have to plan."

Ferguson hopes to hear from more units as time goes on and the desire to reconnect with the people they went to war with grows. He says he won't stop until everyone who wants to reunite with their brothers-in-arms has the opportunity.

"Every one I go to I leave with that fire renewed of 'we have to keep doing this,'" Ferguson says. "The feedback that you get, the things that you see, the people who pull you aside and say 'this was the best weekend of my life'...the people who say 'this probably saved my life' or 'I almost didn't come'...that's what keeps me going."

And it doesn't appear that they'll be lacking support in the near future. WRF was given the Newman's Own Top Veteran Charity award in 2018, in a ceremony presided over by Chairman of the Joint Chiefs Gen. Joseph Dunford.

You can hear the full interview with WRF's James Ferguson below.