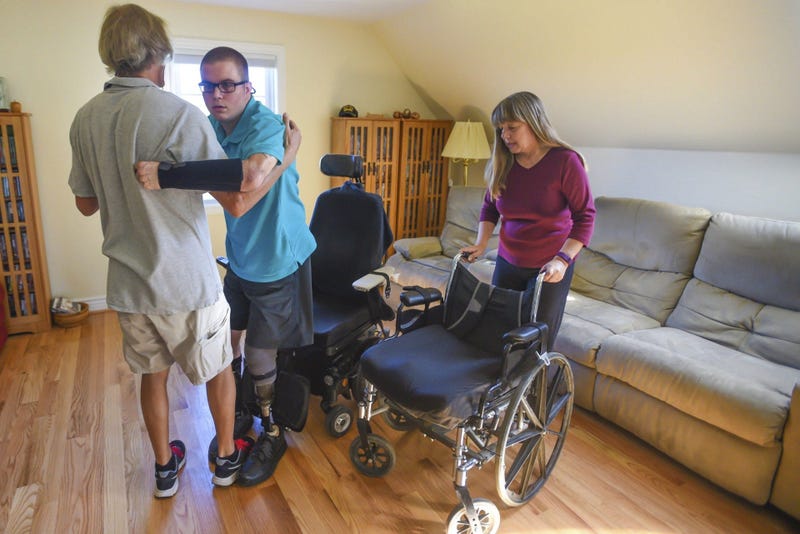 For nearly 15 years, Pam Estes has been caregiver to her son, Jason, an Army veteran seriously injured in Iraq.

Just last week, all she wanted was a cup of tea and she got it, thanks to the Wounded Warrior Project’s Independence Program.

“I was so very excited about having a cup of tea, I thought `this isn’t normal,'’’ she said with a laugh.

Now, WWP has announced a $7.25 million investment to give caregivers like Pam the break they need in the wake of the COVID-19 pandemic

Jason was injured while traveling to a polling station in Iraq in 2006. His humvee was hit by an anti-tank mine, blowing Jason out of the vehicle. He landed several hundred yards away. Both of his legs were broken and he suffered third-degree burns throughout his body.

Couples can keep their relationships strong through WWPs virtual workshops

Jason slipped into a coma and when he awoke three months later, one of his legs had been amputated and he could not swallow or speak.

Pam and her husband Mike stepped in to become Jason’s caregivers, receiving support from the Wounded Warrior Project’s Independence Program.

“They provide for Jason a coach that actually comes into the home and takes him to his therapy, takes him horseback riding, takes him to lunch,” she said. “This enables Jason to not have to be around his parents 24/7.”

That support stopped as a result of COVID-19, and the family jumped in to make sure Jason’s physical therapy continued. Just last week, he was able to resume his horseback riding, giving Pam the cup of tea and three-hour break she needed.

"Caregivers mean so much to the most seriously wounded, ill and injured warriors that have borne the heavy burden from two decades of continuous war," said WWP CEO retired Army Lt. Gen. Mike Linnington. "Many leave careers and surrender personal time to become caregivers, especially those who care for warriors in the Wounded Warrior Project Independence Program.”

“These are warriors who have sustained moderate to severe brain injuries, a spinal cord injury or who are exhibiting a chronic neurological condition,” he explained. “They likely would wind up in an institution if not for caregivers and a caregiver support network.”

There is no application process for the grants. Each eligible caregiver is already enrolled in WWP's Independence Program and will be notified directly. The direct payments of $3,000 each will be made this month.