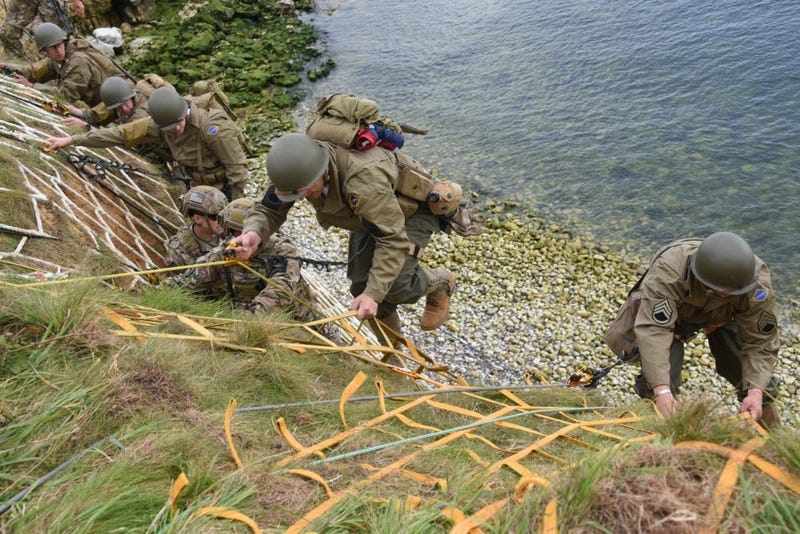 World War II era Rangers are now one step closer to receiving a Congressional Gold Medal for their heroic service in the European theater.

A bill passed unanimously in the Senate earlier this year, but was officially announced just after the anniversary of D-Day, where Rangers famously scaled the cliffs at Pointe Du Hoc in Nazi-occupied France. The bill was sponsored by Sen. Tammy Duckworth, D-Ill., and Sen. Joni Ernst, R-Iowa, both veterans, who issued a joint statement about its passage.

“U.S. Army Rangers bravely wore the uniform of this great nation and participated in some of the most important battles of World War II,” Duckworth said. “The impact and influence of these elite soldiers and the sacrifices they made to protect their fellow Americans cannot be overstated. I’m glad my colleagues voted to pass this bipartisan legislation that will award these Veterans with a Congressional Gold Medal, and I look forward to it becoming law.”

"So many Rangers that had served in various eras have reached out to me and asked me to spearhead this because I had connections to the Ranger Regiment and Ranger Rendezvous at Fort Benning, Georgia," Ernst told Connecting Vets in a past interview. "We did have a lot of support and now having it passed unanimously in the Senate last week was a thrill for us."

"While we can never say thank you enough, awarding the Congressional Gold Medal to these Rangers is a small token of appreciation from a grateful nation,” Sen. Ernst said in a more recent statement.

Rep. Dan Crenshaw, R-Texas, is spearheading the effort to get the bill passed in the House. A similar endeavor is also underway to award a Congressional Gold Medal to Merrill's Maurauders, the World War II Rangers who served in the Pacific theater.