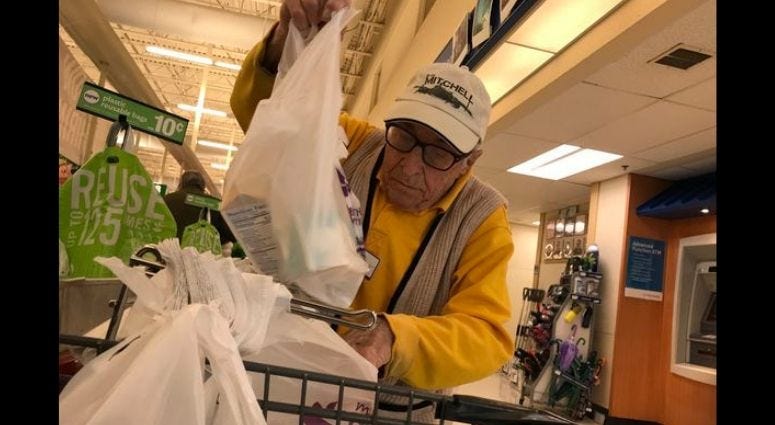 Shoppers at the local Stop & Shop in Edison, NJ get more than just groceries.  Regardless of what they came in for, they always leave with a smile after meeting Bartolomeo "Benny" Ficeto, aka "Benny the Bagger".

"I like the people I work with, and I like the customers and helping them out,” Ficeto told the United Food and Commercial Workers Local Union 1262. “It's what keeps me young. You have to keep active."

His manager, Sal Marconi told CBS, “He's a pleasure to work with. ‘Bennie's’ got a great sense of humor. He loves his job. He's a great inspiration and morale booster for everyone else.”

Ficeto, who says he hates to take breaks, was encouraged to take one on Tuesday.  And when he walked to the front of the store he was greeted by his co-workers, who were eager to surprise him with cake and a special musical performance. 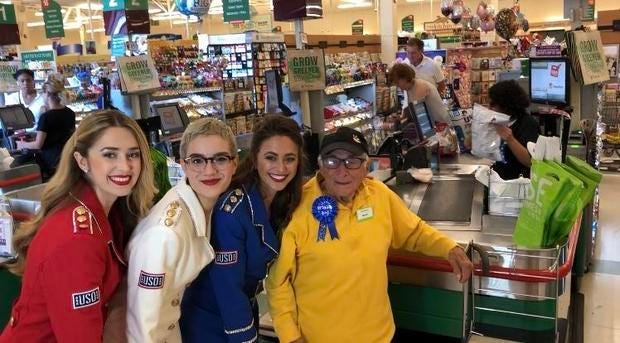 A USO Show Troupe dressed in red, white, and blue was there and serenaded the veteran with some of his favorite songs from his military days.

Ficeto’s military career is a shining example of why we call the men and women of that era, “The Greatest Generation.” He told CBS News he enlisted in the military at the age of 19, serving in the Air Force during World War II, as a gunner aboard a B-25 Bomber where he flew on missions over North Africa and Italy.

After the Air Force, Ficeto held several jobs and retired in his 80s. But the feisty New Jersey veteran wanted to stay busy so a decade ago he took a part-time job at Stop & Shop.

But hero or not, after taking a few moments to celebrate away from his post, Ficeto quickly returned to his aisle and went right back to bagging groceries.

Happy Birthday, Benny, we wish all groceries stores had a bagger like you.

Want to get more connected to the great stories and resources Connecting Vets has to offer? Click here to sign up for our weekly newsletter