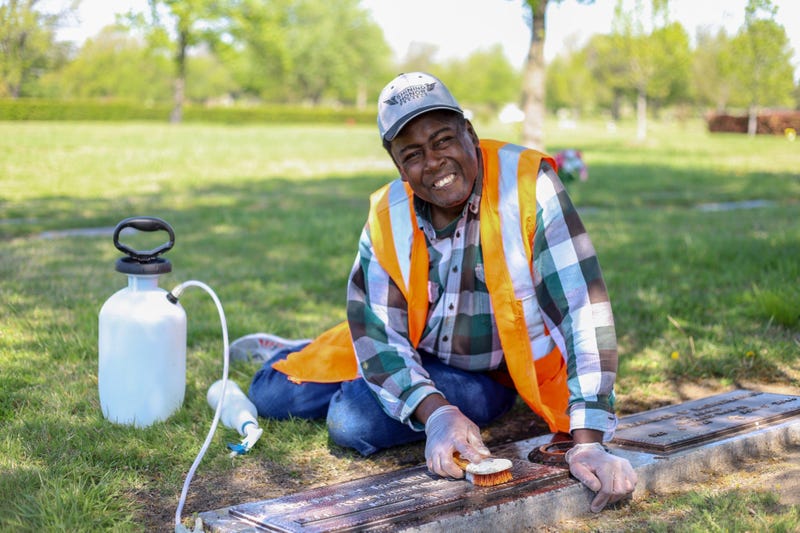 For about four hours every Tuesday, Wednesday, and Thursday, Kimberly Lowe refurbishes veterans gravestones throughout cemeteries in the Tulsa, Oklahoma area.

Lowe is accompanied with three other adults and a job coach. Together, they make up an Honor Team. It’s part of a partnership between the Shining Honor Project and A New Leaf, which provides individuals with developmental disabilities vocational training, job placement, and pay.

“It helps me get to know who served our country and I really enjoy doing it,” said Lowe. “And my family is in the military too so it actually gets me to pay my respects that they deserve.”

Erin Wambold, the executive director for the Shining Honor Project,  says the community saw a need to bring two different groups together and the organization was born.

Before they begin cleaning, the job coach reads off the name and service history of each veteran or spouse's headstone they'll clean for the day. Wambold recalls a particular incident where an Honor Team member surprised the staff.

"Before they start their morning, they go by and read off the list...they'll place flags in front of their headstones," Wambold explained.  "One of the guys was following the job coach and all of the sudden looks down at the headstone and reads it off...they didn't realize he could read so they started letting him lead the group."

Those are the stories Wambold and the rest of the staff live for.

Thanks to generous donations from the community, Honor Team members are paid $9.00 an hour and are able to set their own schedule. The team is professionally trained in headstone restoration and uses products approved by the National Park Service, the same cleaning products used in Arlington National Cemetery.

Honor Team members are also equipped with foam rollers to protect their knees while sitting in front of the headstones and water during their four-hour shifts.

Lowe says her family is “really excited and proud” of the work she is doing with the Shining Honor Project. “I get told every day by my house staff, my mom, [and] my dad th