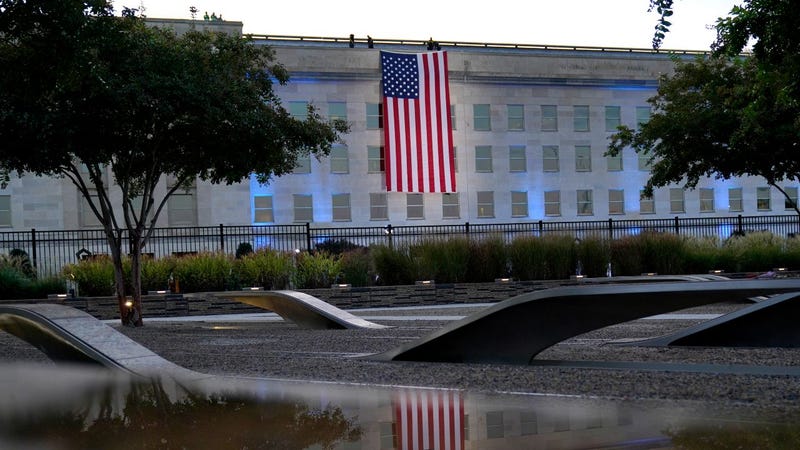 An American flag is unfurled at the Pentagon in Washington, Saturday, Sept. 11, 2021, at sunrise on the morning of the 20th anniversary of the terrorist attacks. The American flag is draped over the site of impact at the Pentagon. In the foreground, the National 9/11 Pentagon Memorial, opened in 2008 adjacent to the site, commemorates the lives lost at the Pentagon and onboard American Airlines Flight 77. Photo credit AP Photo/Alex Brandon
By The Associated Press

A declassified FBI document related to logistical support given to two of the Saudi hijackers in the run-up to the Sept. 11 attacks details contacts the men had with Saudi associates in the United States but does not provide proof that senior kingdom officials were complicit in the plot.

The document released Saturday, on the 20th anniversary of the attacks, is the first investigative record to be disclosed since President Joe Biden ordered a declassification review of materials that for years have remained out of public view. The 16-page document is a summary of an FBI interview done in 2015 with a man who had frequent contact with Saudi nationals in the U.S. who supported the first hijackers to arrive in the country before the attacks.

Biden ordered the Justice Department and other agencies to conduct a declassification review and release what documents they can over the next six months. He was under pressure from victims' families, who have long sought the records as they pursue a lawsuit in New York alleging that Saudi government officials supported the hijackers.

The heavily blacked-out document was released hours after Biden attended Sept. 11 memorial events in New York, Pennsylvania and at the Pentagon. Victims’ relatives had said they would object to Biden’s presence at those remembrances as long as the documents remained classified.