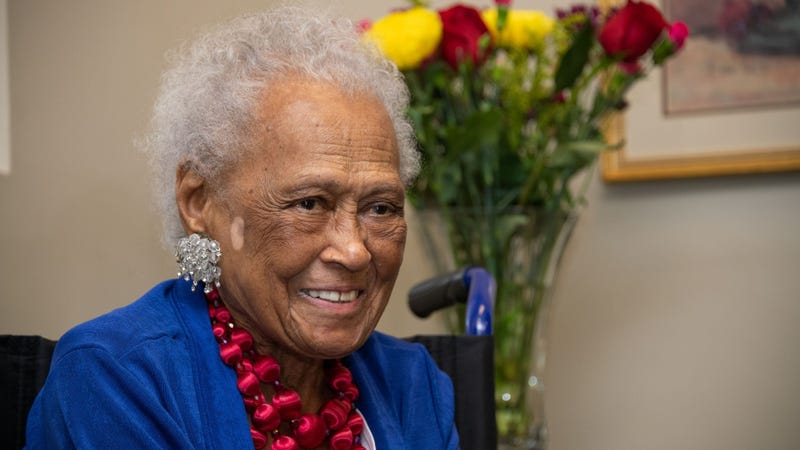 During the Montgomery City Hall ceremony, Davis received the medal for her service as one of the 855 Black women who served in the 6888th Central Postal Directory Battalion in World War II. She is the oldest living member and only one of six alive to receive this honor.

The 6888th was the only predominantly Black female unit that served overseas during WWII. The unit resolved a growing mail crisis during the war by ensuring American troops received their letters and packages from home. They went by the motto of "no mail, no morale." The unit proved they were up to the challenge as they tackled the mountain of postal backlog that awaited them in England and France. They processed more than 195,000 pieces of mail a day, eventually clearing over 17 million pieces of mail by the end of their tour." 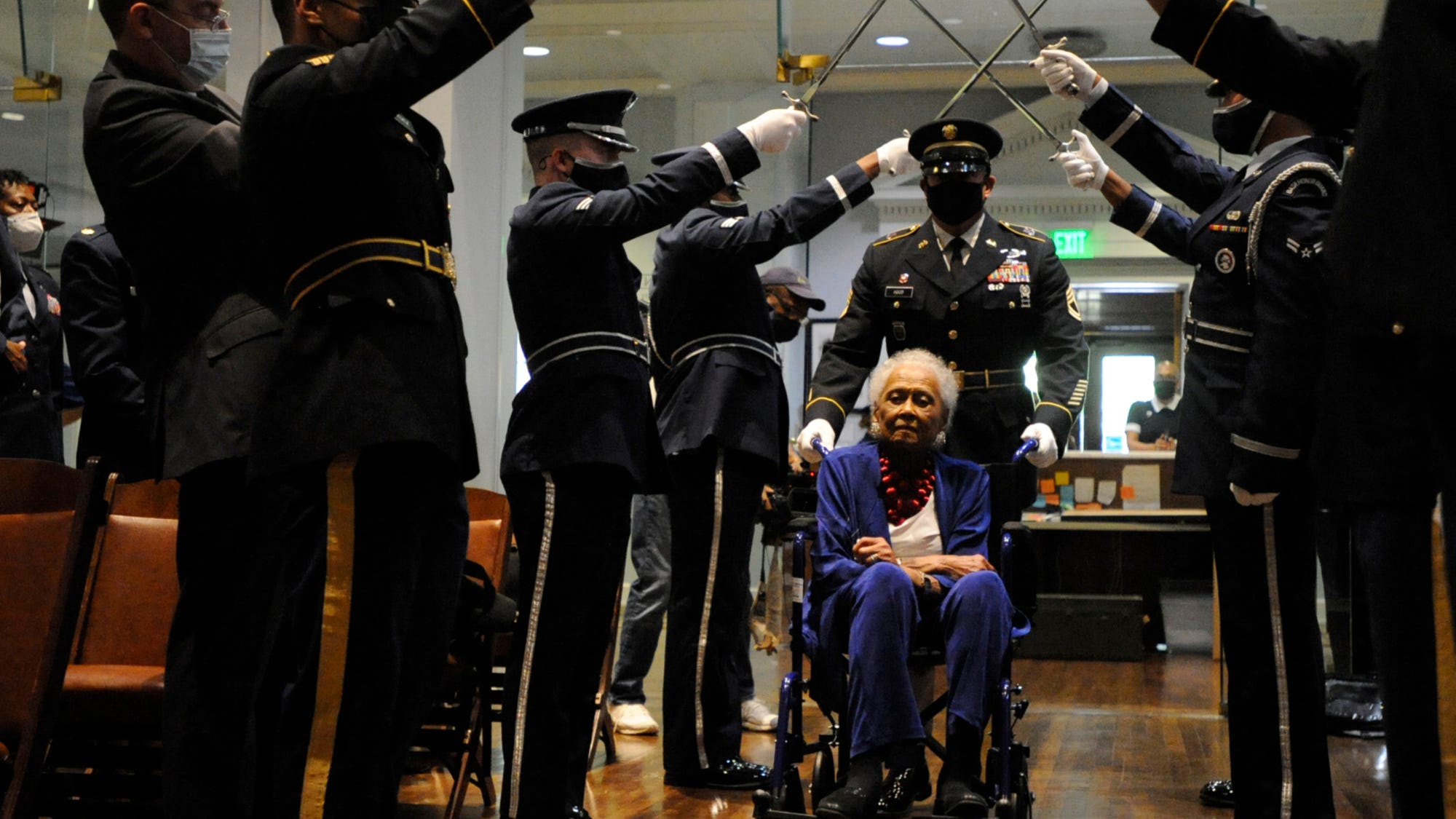 "During World War II, Black and female Americans fought for a double victory — victory against fascism overseas and victories against racism at home," said Col. Eries Mentzer, 42nd Air Base Wing commander, who Davis requested to host her medal recognition ceremony and who is the first Black woman to command Maxwell.

"The service of the 6888th demonstrated the talent and worth of minority and female Americans in service to our country abroad and paved the way for greater equal opportunity and civil rights in American communities. I humbly follow in an exceptional legacy of Ms. Davis and the 6888th, they paved more freedom to serve, and I am incredibly honored, grateful and frankly here because of their service." 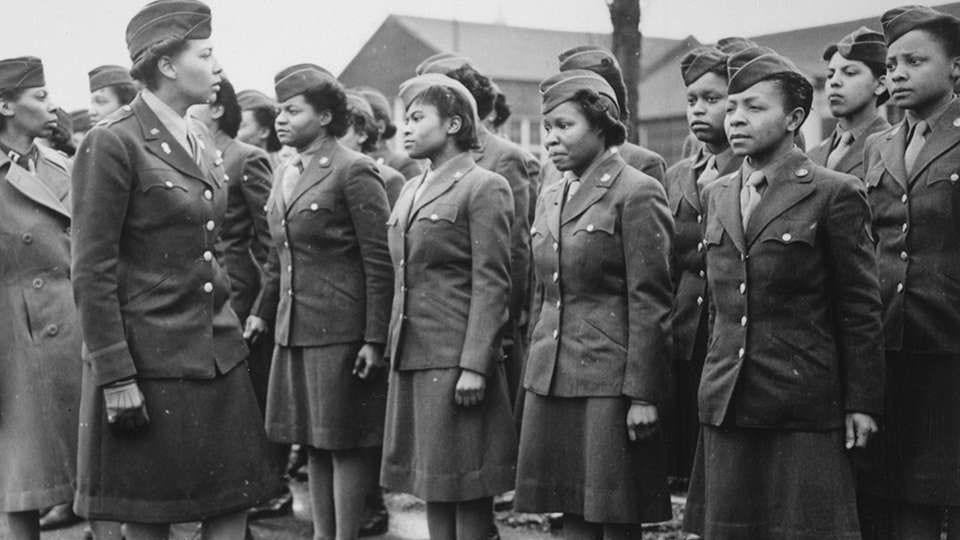 As a minority group, the Six Triple Eight met barriers in the form of segregation and gender inequality. Living quarters, mess halls, recreational facilities and even the water fountains in basic military training were segregated. When traveling, some African American female officers faced discrimination and were questioned on the legitimacy of their ranks in the military. They were denied constitutional freedoms at home, but selflessly fought for freedom as part of the U.S. armed forces overseas.

“She persevered, led through incredible trying times, changing the face of our military and in doing so set a shining example that still continues to do so today," said Air Force Chief of Staff Gen. C. Q. Brown, Jr., in a video tribute to Davis shown at the ceremony. "She even earned a black belt in Taekwondo in her 70s. That's what I call perseverance. Nearly 80 years from her brave service, we have our first African American secretary of defense and service chief and our first female chief master sergeant of the Air Force. We stand on the shoulders of giants. Because of the hard work of generations of African Americans and women leaders like her, your recognition is well deserved, and you're an inspiration to all of us. Congratulations, Private First Class Romay Davis."

"The armed forces were strengthened not only by their efficiency in completing their mission but also by the long-lasting legacy of their many achievements and commitment toward the freedom to serve,” said Cedric Campbell, chairman of the Montgomery Area Chamber of Commerce and co-host for the event. "Their defense of freedom was a defense for all." 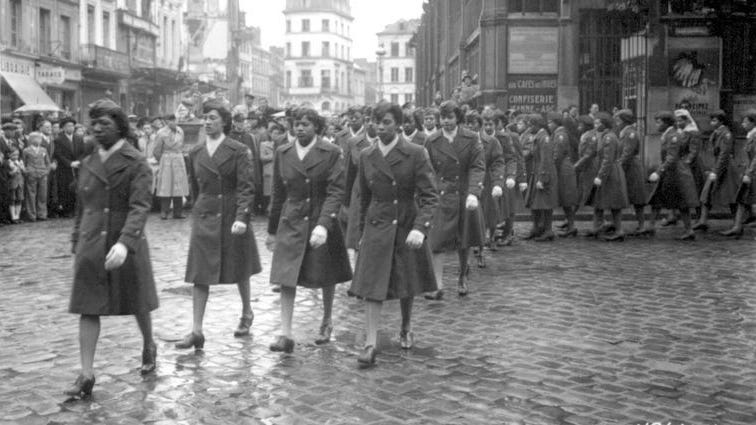 Sister soldiers: The Elzie sisters and their legacy of service with the 6888th

While serving in the battalion, Davis was assigned to the motor pool, where she could see the countryside and its war-torn destruction firsthand as she drove two-and-a-half-ton trucks and staff cars as part of her duties when not sorting mail. After the war, Davis attended fashion school on the GI Bill and went on to have a 30-year career as a fashion designer. She's achieved her master's degree, earned a second-degree black belt in Taekwondo, and in her 80s, began working at a Winn-Dixie grocery store, where she has made a tremendous impact on her community with her gracious attitude and hard-working spirit.

Davis’ ceremony was held on the 74th anniversary of Executive Order 9981, which banned segregation in the United States Armed Forces with state, local and military leaders. The Montgomery Area Chamber of Commerce and Maxwell selected this day for the ceremony as the Six Triple Eight's courage and commitment to democracy and their honorable service paved the way for equality of treatment and opportunity for all persons in the Armed Forces, without regard to race, color, religion or national origin, as promised with Executive Order 9981.

Before the ceremony, a motorcycle motorcade of 30 of Buffalo Solider Riders escorted Davis to the ceremony. Along with Brown, Coast Guard Admiral Linda L. Fagan, the first woman service chief in the armed forces, extended congratulatory remarks to Davis for paving their opportunity to serve. Davis also received recognition from state and local elected officials. 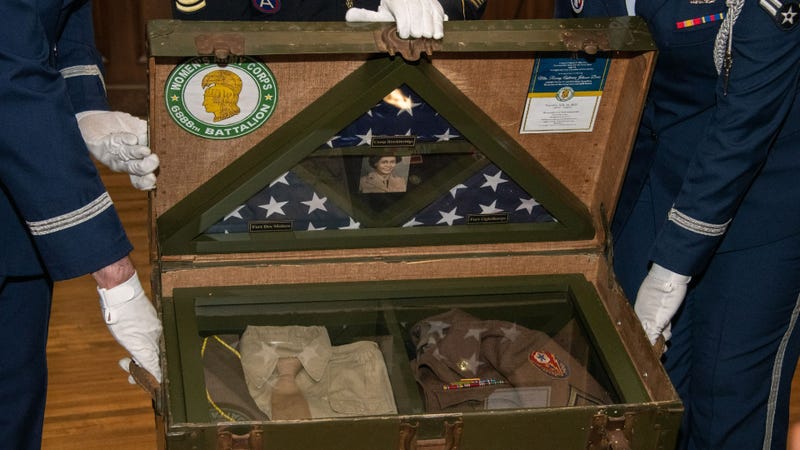 Mentzer and Maxwell’s command chief, Chief Master Sgt. Lee E. Hoover, Jr., presented Davis with a World War II women's Army Corps uniform. Davis’s uniform was stolen from her shortly after her return from Europe. She was also presented with flags flown at the bases where she served. The ceremony culminated with a musical tribute, "A Change is Gonna Come," performed by Maxwell’s 1st Lt. Nia Gilliam.

"Nearly 80 years after their exemplary service in World War II, we finally recognize the selfless service of the 6888th with the highest distinction Congress can bestow," said Montgomery Mayor Steven Reed. "May the honorable service of Private Davis in a segregated unit that resulted in more liberties for all Americans inspire all of us to do our part to remove civil rights barriers and truly live up to our nation's founding ideals of freedom, equality and justice for all.”