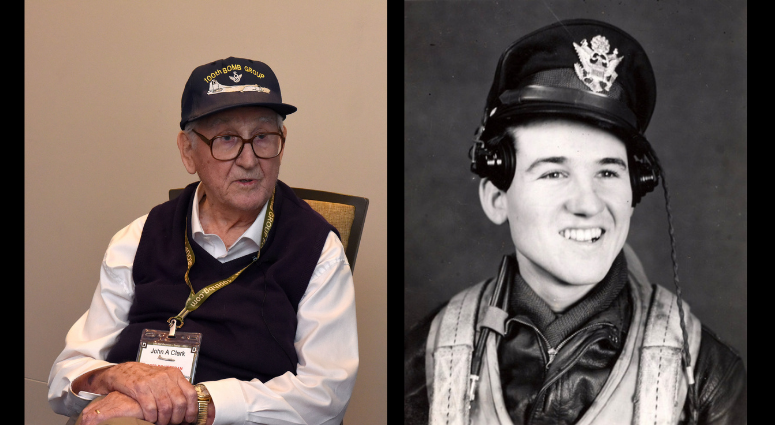 “I think of my generation, born in the 1920s and 1930s, as the air-minded one we were naturally excited about airplanes much like young people now are excited about space,” said retired 1st Lt. John A. Clark, 98, former 418th Bomb Squadron and 100th Bomb Group co-pilot, who was stationed at Thorpe Abbotts, Norfolk, England, during World War II.

During an interview at the 100th Bomb Group reunion in Dallas, Texas, Oct. 28, 2021, Clark described how from a very young age he was fascinated by the airplanes that would occasionally fly over his neighborhood in south east Michigan.

“They were mostly little planes from a U.S. Army Air Corps base, Selfridge Field, north of Detroit,” he said. “We were probably about five minutes from the base, and the planes would often go over our neighborhood in a formation of three or four and would have rondels on the wings and stripes on the tails, and I was fascinated by that. I became interested in aviation pretty early on, stimulated a lot by the Army Air Corps. They had an open house once a year, which of course I always wanted to go to.”

Born in 1923, Clark said he became interested in making models of airplanes during the mid-30s until he went into the service, during the early 1940s.

“I think I made a model of every airplane that existed, using balsa wood and tissue paper. The last one was gasoline-powered, one-cycle engines with mixture of gasoline and oil in the fuel tank. It was quite powerful for a small plane,” he recalled proudly.

He quickly took his airplane building to the next level, moving from static to flying models, and was soon designing his own planes. 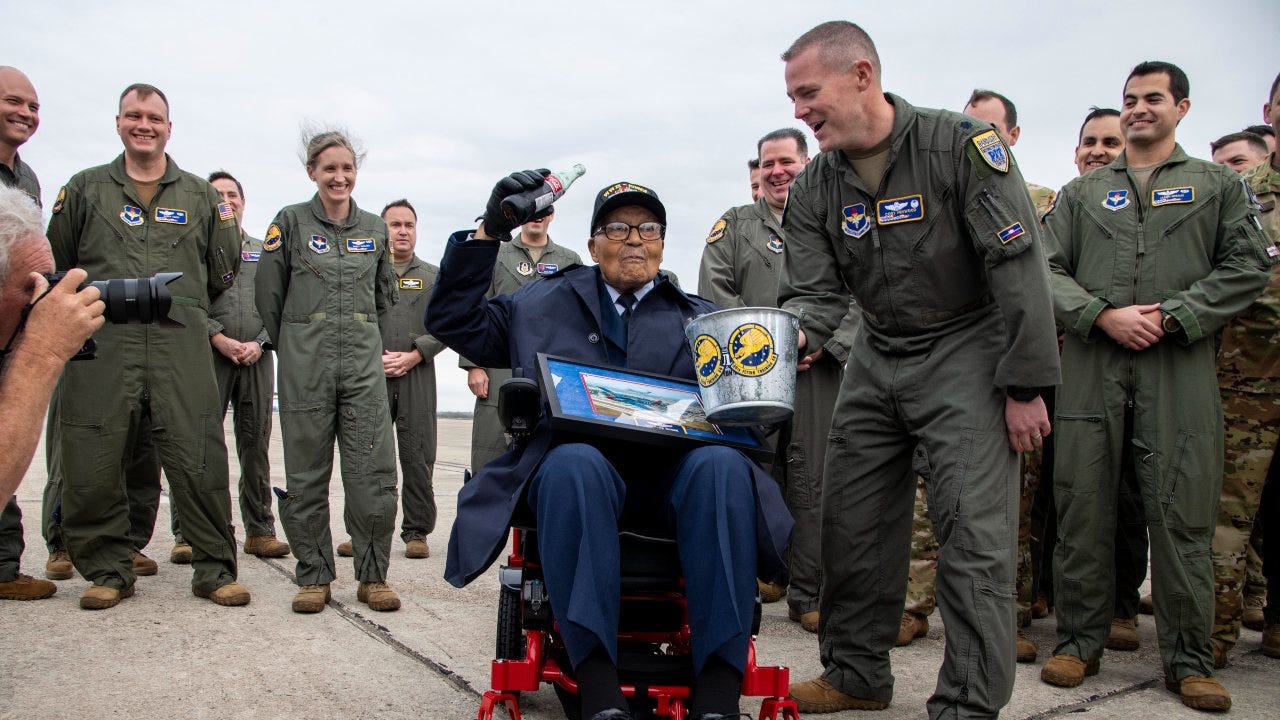 “I had to learn about centers of lateral area, wing area, rudder area and so on,” Clark remarked. “My mother would allow me to hang my models from the ceiling in our living room – I think I had 24 models hanging from the ceiling at one time!

“The gasoline-powered one I designed had a 6-foot wingspan, so it was too big to hang from the ceiling; I kept it in any place in the house I could get,” he chuckled. “The wings were detachable. It was never terribly successful in getting a flight, but I felt the satisfaction in just completing them, then any time they crashed – which was every time – I had fun fixing them. In 1939, there was an airplane model contest in my city, and I entered. I don’t know what happened, but I won the cup! I think I still have that cup somewhere; I got it 80 years ago, when I was about 16.”

He and his family lived in a sub-division in the country, and Clark took the bus to school as he couldn’t afford a car or the fuel, so instead he put all his spare time into building his model planes.

“Later, I joined the high school band because the girl I liked was in it, but I wasn’t very good. I first started out with a piccolo (as a friend of mine had an extra one) but I ended up losing it and the band director told me he had an extra baritone horn and needed someone to march in a band. But he said, ‘Don’t worry about playing it, and when we have a concert, just hold it because I have someone coming from the outside who can play it…’ I really wasn’t much of a musician!” he laughed.

On graduating from high school in 1940, the World War II survivor recalled how he got a job as a carpenter’s helper. 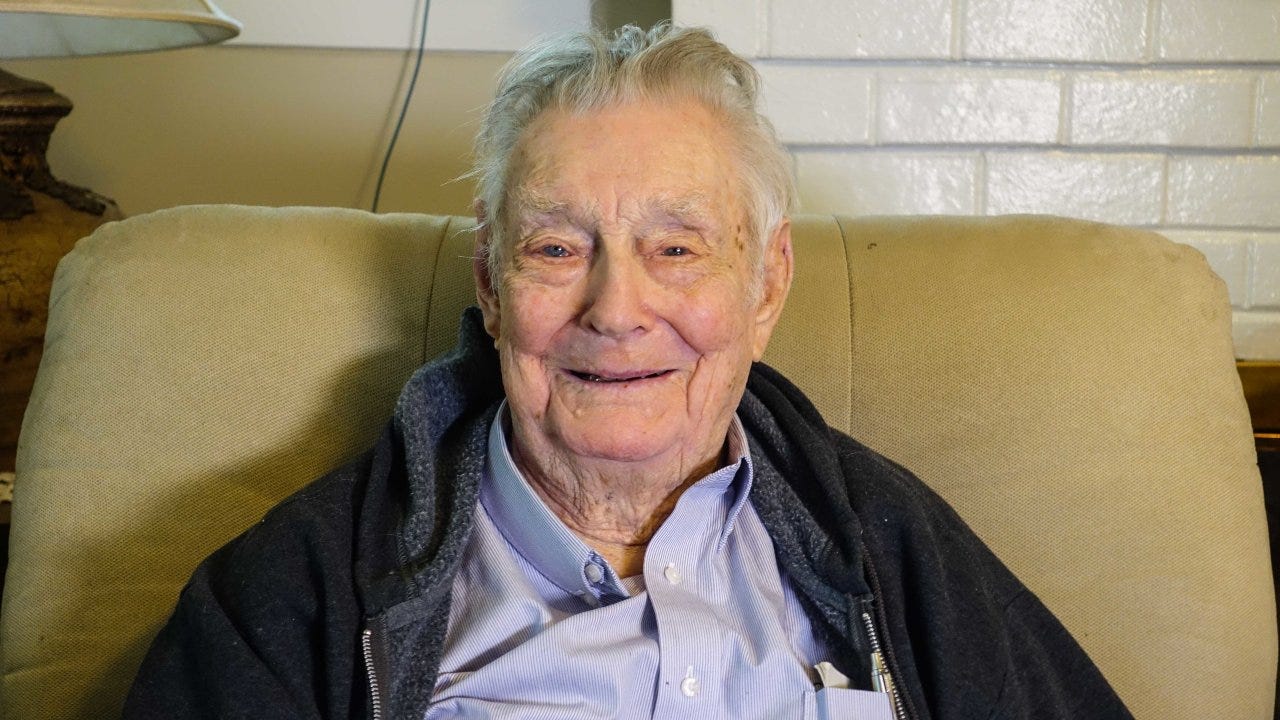 “My brother was working with a contractor, and he got me a job, but it only lasted for one day. At the end of that day, the contractor said to me, ‘John, you just can’t hack it and I just can’t use you…’ I was earning 25 cents an hour, and I had plans for the summer to become quite wealthy! I went home and talked to my mother, who was my inspiration in a lot of things, and she said, ‘I want you to go back and speak to Bruce (the contractor) and tell him you’ll work for whatever he’ll pay you.’

“So, I went back, and Bruce told me he couldn’t turn down an offer like that, and I could carry on working then at the end of the week he would tell me what he’d pay me. When the end of the week came, he wanted to talk to me, and I really thought I hadn’t done very well. But he told me, ‘I like the way you work – I was going to pay you 17 ½ cents an hour (for an eight-hour day) but I’m going to pay you 25 cents an hour from the day you started!”

Clark and his brother worked well together, and when summer ended that year, they could lay out the roof carpentry – the first floor one day, and the roof the second day – as they had learned to nail really fast.

“By then I was earning $2 an hour,” he exclaimed. “My mother told me, ‘You know what you can do, so just stick with it and don’t give up. When you have the chance, you’ll do well.’ At 17 years old, that was some of the best advice I ever had!”

“At the time, we were on the road to Battle Creek – a military base about half-way to Chicago – but when we got there the gates were closed and locked, which was very strange,” the 100th Bomb Group veteran recalled. “We weren’t expecting that, as you were usually allowed on, but the guard refused us entry, so we had to turn around and do the three-hour drive home. As soon as we got in the house, the first thing my dad did was turn on the radio, but there was nothing except background static. Suddenly, a voice came on and said, ‘Ladies and Gentlemen, owing to the attack on Pearl Harbor, we have to interrupt this program…’ That was the first we’d heard of it, because our car – a Model T Ford – didn’t have a radio, just a heater.” 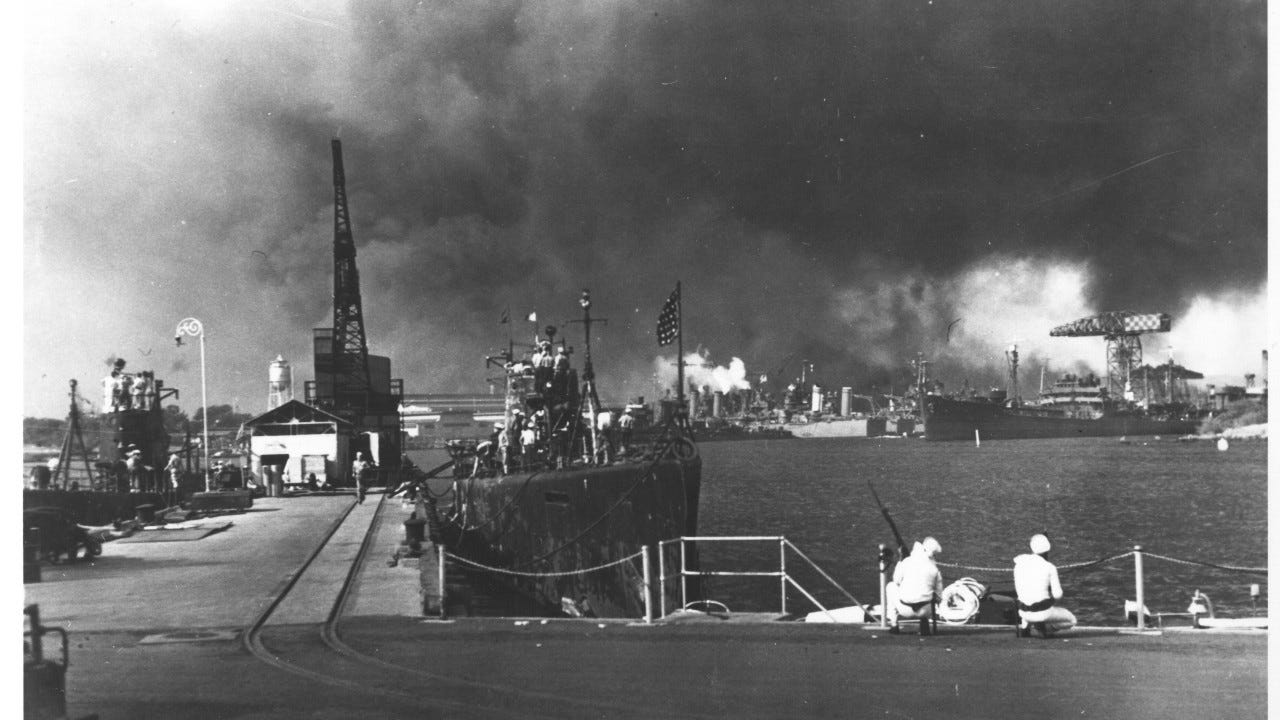 Clark said during World War I, his father had been a radio operator in the Navy and stationed at Pearl Harbor, and shared the passion to serve his country.

“I was interested in the Air Force, and when the war came, I was never drafted because I volunteered. There was no question on what I should do; I wanted to fly in the U.S. Army Air Force, so I took the examination in ‘42, and I also held an alternate appointment for the cadets at West Point,” he said. “I got through those exams and came second, but I was delayed a couple of months in the Air Force as they were holding the appointment as they wanted to see if I would go on to West Point or not.

“I went to the Air Force office and filled out the paperwork, passed the physical and they enlisted me right away. Then in February 1943, the Army at West Point finally called me up and that day I entered the Army Air Corps as a Private. We went to basic training in Missouri but then we were separated out into Army and Air Force recruits,” he said.

The World War II survivor explained that he was one of several people who volunteered as Air Force pilots. Their training was delayed, so in the meantime they were transferred to college for a few weeks.

“There were three of us who already had a lot of college and the Dean looked over our records and told us, ‘I don’t know what you’re doing here, I’m going to send you right off to Air Force training!’ From there, in July ’43, I went to the west coast for preliminary training, guard duty, carrying a rifle and all that stuff. Then I was an aviation cadet at a classification place, and we were given tests to decide which job we wanted to do,” said Clark. 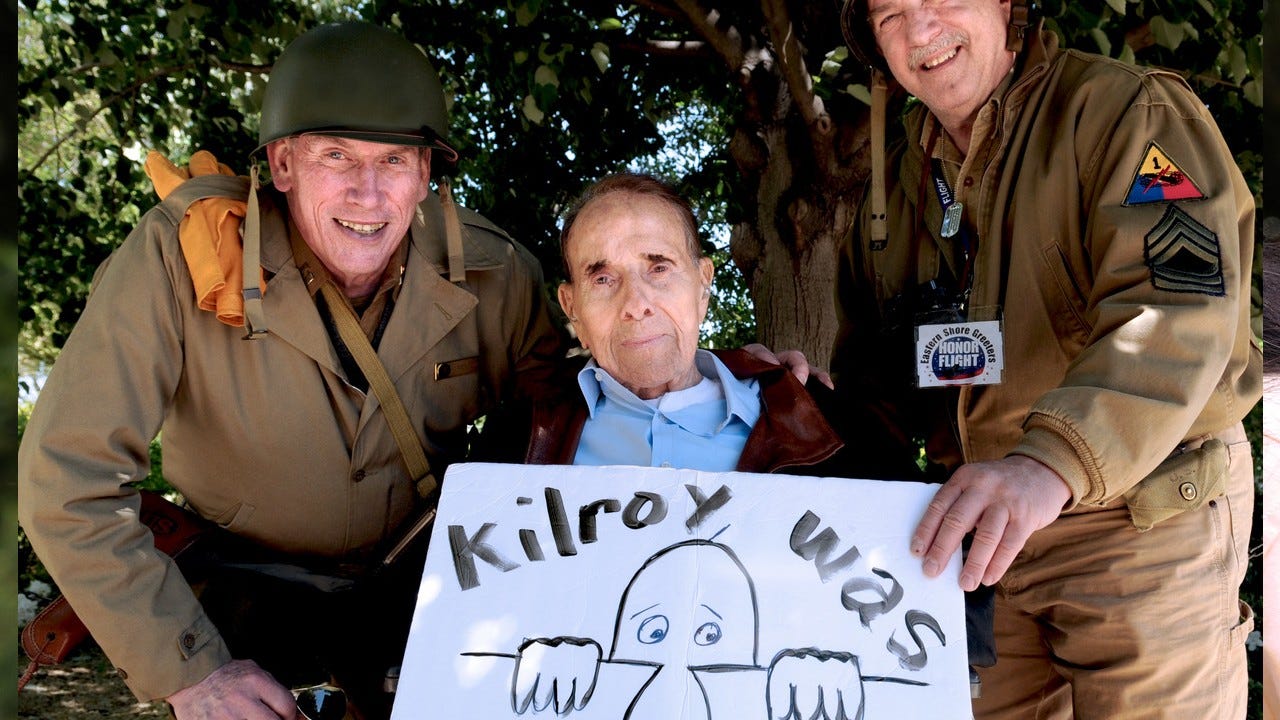 The choices were bombardier, navigator or pilot.

“I wanted to be a pilot; I passed all the tests and at the end of August 1943, I was sent to first pilot primary training at Twentynine Palms Base, California. Back then, all primary flight training was done at civilian schools with civilian instructors, and they were very good,” he remarked. “They didn’t chew you out like military instructors.”

The trainer aircraft was a twin-wing Stearman. After a couple of months or so, Clark and the other trainee pilots moved on to Merced, California, for BT-13 Valiant aircraft basic training before heading to Stockton, California for twin-engine advanced flying.

“I graduated from Stockton in April 1944 as a second lieutenant pilot, and after a couple of weeks at home I eventually ended up in Las Vegas at a flexible gunnery school,” said Clark. “Gunners would fly in B-17 Flying Fortress aircraft with a camera on their guns and track fighters. That was the first time I got in a B-17, and by that time I was becoming a co-pilot.”

It was in Las Vegas where the first lieutenant was to meet the love of his life and start his journey to becoming a 100th Bomb Group veteran.