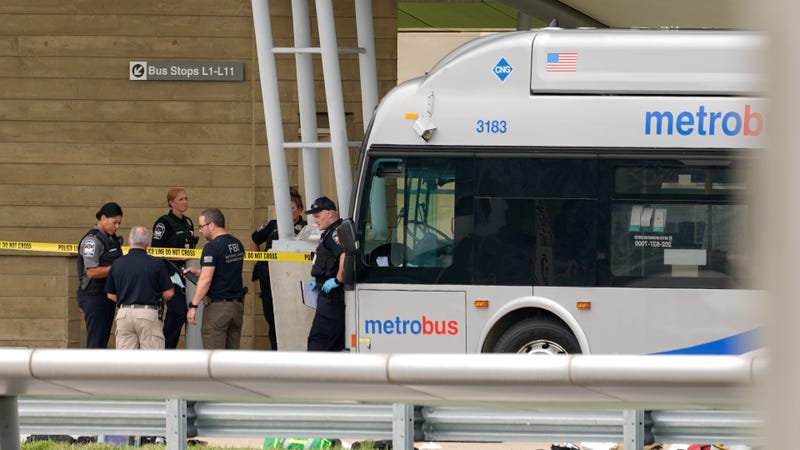 Police are looking at a scene and items are seen on the ground near a Metrobus outside the Pentagon Metro area, Tuesday, Aug. 3, 2021 at the Pentagon in Washington. Photo credit AP Photo/Andrew Harnik
By The Associated Press

A Pentagon police officer died after being stabbed Tuesday during a burst of violence at a transit center outside the building, and a suspect was shot by law enforcement and died at the scene.

The Pentagon Force Protection Agency said Officer George Gonzalez was a New York native and Army veteran who served in Iraq. He'd been on the police force for three years. He died after being stabbed during a burst of violence at a transit center outside the building, and a suspect was shot by law enforcement and died at the scene.

The Pentagon, the headquarters of the U.S. military, was temporarily placed on lockdown after a man attacked the officer on a bus platform shortly after 10:30 a.m. The ensuing violence, which included a volley of gunshots, resulted in “several casualties,” said Woodrow Kusse, the chief of the Pentagon Force Protection Agency, which is responsible for security in the facility.

The deaths of the officer and the suspect were first confirmed by officials who were not authorized to discuss the matter and spoke to The Associated Press on condition of anonymity. The Fairfax County Police Department also tweeted condolences about the officer's death. Officials said they believe two bystanders were injured.

The suspect was identified by multiple law enforcement officials as Austin William Lanz, 27, of Georgia.

The officer was ambushed by Lanz, who ran at him and stabbed him in the neck, according to two of the law enforcement officials. Responding officers then shot and killed Lanz. Investigators were still trying to determine a motive for the attack and were digging into Lanz’s background, including any potential history of mental illness or any reason he might want to target the Pentagon or police officers.

The officials could not discuss the investigation publicly and spoke to The AP on condition of anonymity.

Lanz had enlisted in the U.S. Marine Corps in October 2012 but was “administratively separated” less than a month later and never earned the title Marine, the Corps said in a statement.