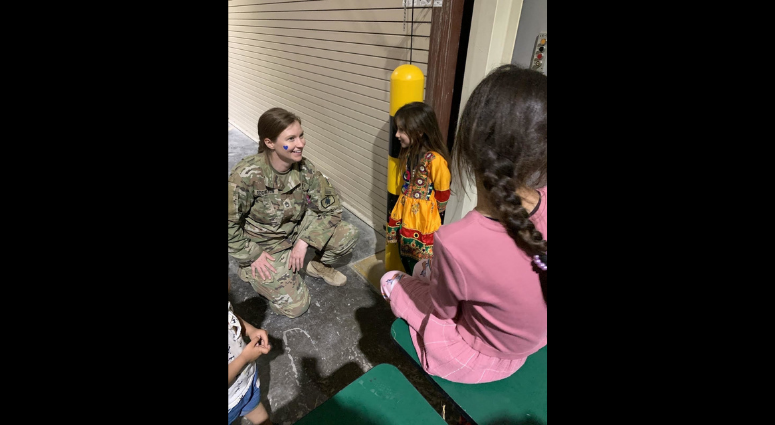 Sgt. 1st Class Nicole Edgington, the Task Force Liberty Civil Affairs Noncommissioned-Officer-in-Charge, shares a moment with one of Muhammed's daughters during the family's stay at Camp As Sayliyah, Qatar, before they flew to America. Now settled, the family sent Edgington a video recently, in which Muhammed thanked Task Force Liberty Soldiers and civilians for the work they put in to assist his, along with thousands of other families, reach safety. Photo credit U.S. Army/Sgt. Marc Loi
By Army.mil

In the grainy video sent on a messenger application, a father sits on the couch. Four children — none older than 11 — surround him, eagerly waving and speaking over one another to introduce themselves.

As the chorus dies, the father takes a moment to collect his thoughts before speaking.

“Me and my family have been evacuated by you guys, and we are making this video to thank the people who have supported us throughout our journey,” he said.

The man, Muhammed, a former interpreter who worked alongside U.S. forces for 16 years, was one of the thousands evacuated from Afghanistan by the Department of State, with assistance from the United States military. In the six-minute video, the former Kabul resident recounted his family’s journey from Kabul to Qatar, to Philadelphia and New Jersey, and eventually to Texas, where the family now resides.

He added that countless Soldiers and civilians assigned to Task Force Liberty — the Afghan Evacuations Mission Support Element working under Task Force Spartan, based at Camp As Sayliyah, Qatar — played a part in ensuring his family’s safety. 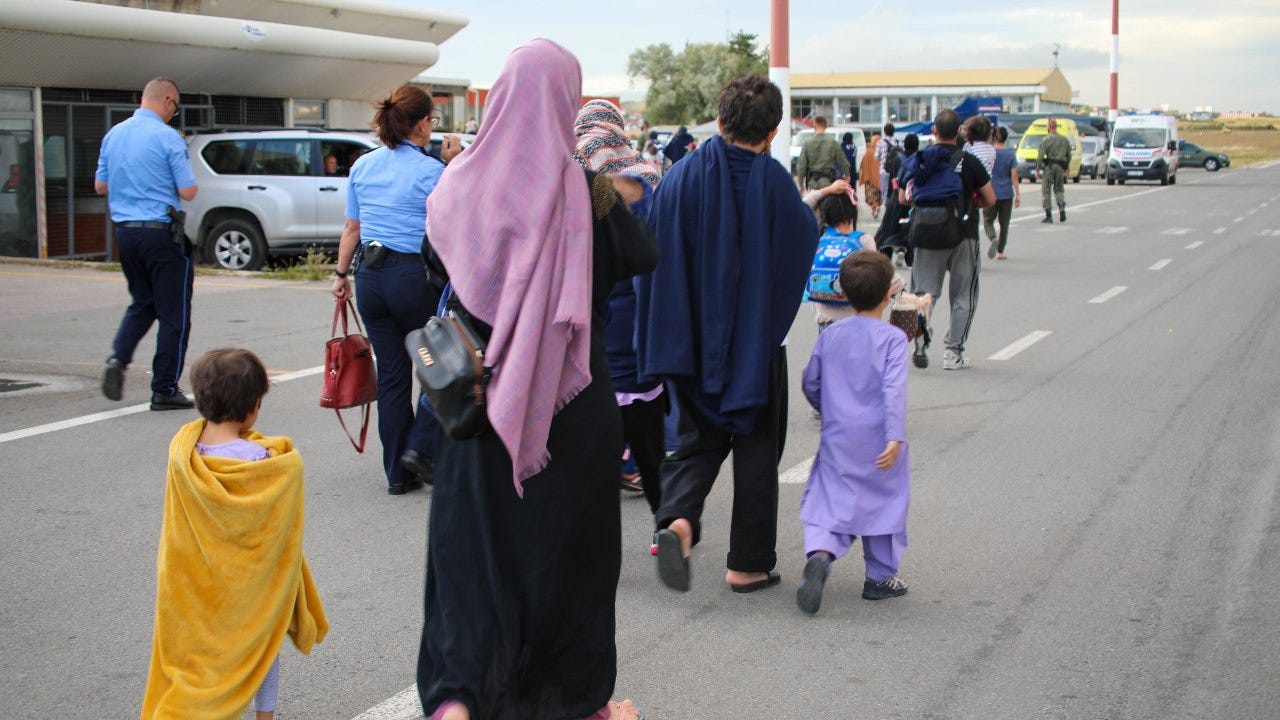 “I thank every single one of you — you’ve worked hard not just for me but for thousands of others. I know it’s hard because that’s a lot of people to evacuate, in-process, feed, clothe, and give places to sleep and give them medical attention. It’s a big effort,” he said.

In the message, Muhammed also thanked those he did not meet but who also had a role in making his family’s journey possible.

“I also would like to thank the people who worked behind the scenes, behind the computers, to support us,” he said. I know this would not be possible without you. You made this happen.”

Capt. Timothy Dziwulski is one of those Soldiers. As a battle captain for Task Force Liberty working in current operations, Dziwulski spends most of his time coordinating and planning with interagency partners to ensure guests’ safety during their stay here. Despite having few interactions with Afghan guests, Dziwulski — of Severn, Maryland — said he never forgot about the human element of the State Department-led operation.

“I still feel that connection with our guests even if I rarely see them because I am doing something else,” he said. “Videos like that one feel good because even though it’s surprising, it’s also expected — you expect that will be the result — because of the hard work the Soldiers put in.” 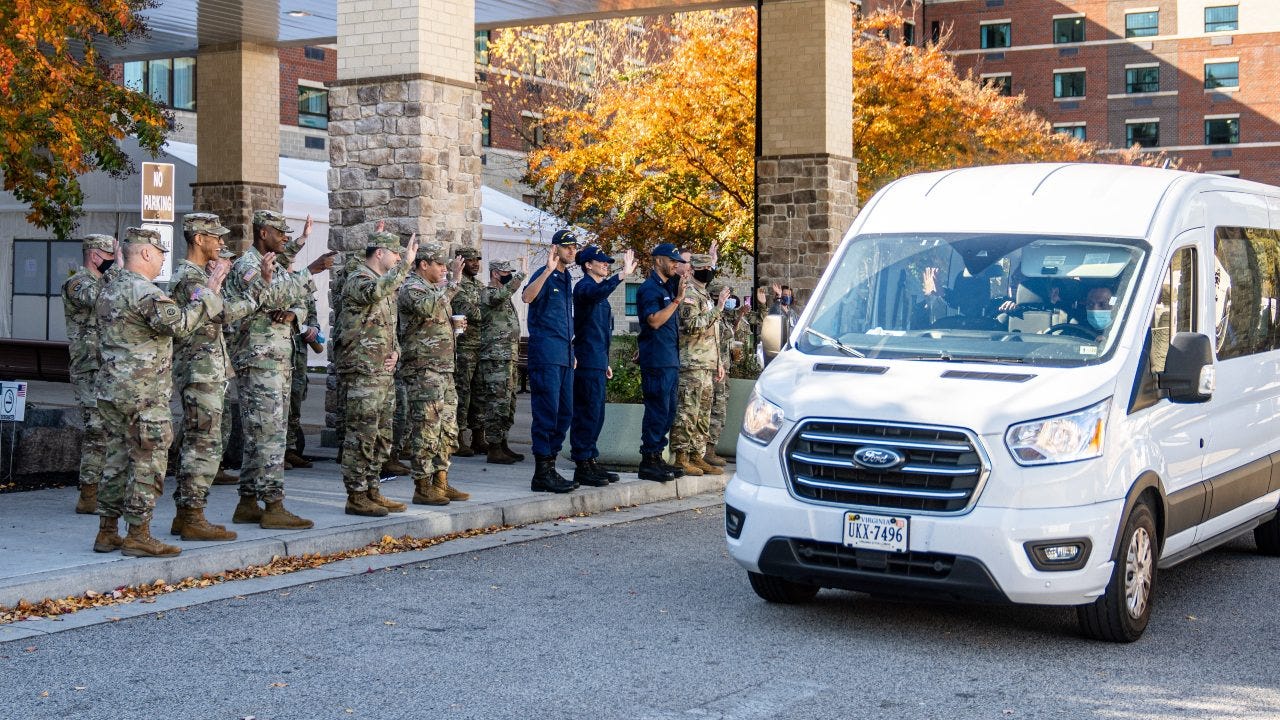 Unlike Dziwulski, Sgt. 1st Class Nicole Edgington, the Task Force Liberty Civil Affairs noncommissioned officer-in-charge, has had multiple interactions with Muhammed’s family along with other guests since August. Because of their interactions, the family kept in touch with Edgington during their journey and sent her the video after they had settled in Texas.

Testimonies like Muhammed’s help confirm that the work Edgington puts in has made a difference, she said.

“Being able to keep in touch with families and see their progress throughout the evacuation process is motivating,” Edgington, of Little Rock, Arkansas, said. “This is my third deployment and is easily the most rewarding mission I’ve been a part of.”

What especially makes the mission meaningful, said Edgington, is that, as a parent, she identifies with how guests caught in precarious situations might feel as parents. She also understands the relief a helping hand can bring.

“Many families have been through a lot of traumas,” she said. “Seeing the children laugh and smile warms my heart, and I hope our work relieves a little of the stress for the parents here.” 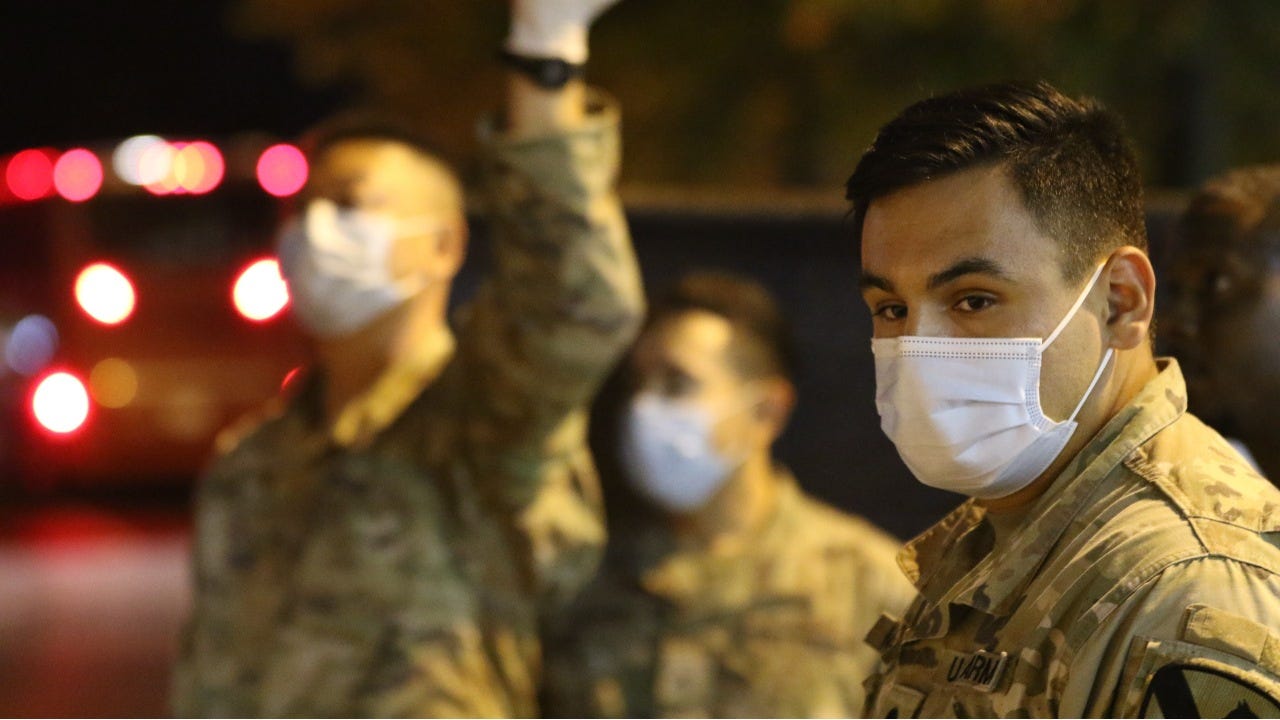 Although their journey was long, Muhammed said his family is now settled in Texas, he is currently seeking employment, and his three school-aged daughters have begun their education.

“We have everything we need because of you guys,” he said. “My kids have clothes, food, and a place to sleep, and I appreciate you for it.”

As the video came to an end, Muhammed reminded the audience once more of the impact they’ve had on his family.

“Thank you for everything,” he said.

“For everything,” one of his daughters echoed.