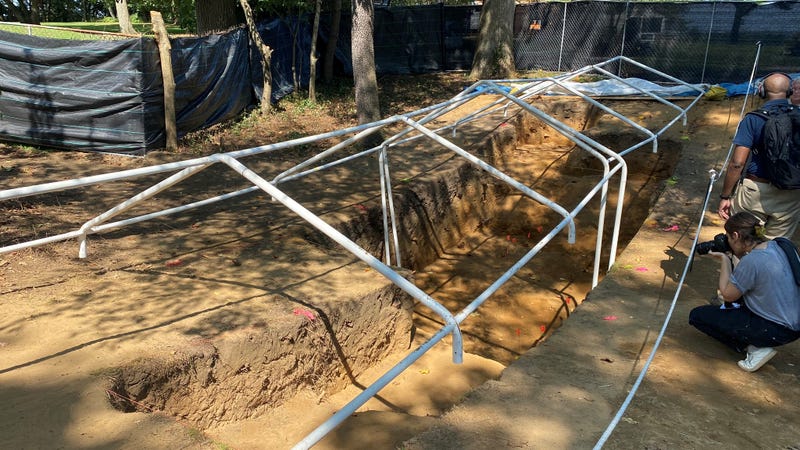 The excavation of a newly-acquired section of Red Bank Battlefield Park in Gloucester County, where remains of soldiers from a battle in 1777 were found. Photo credit Mike Dougherty/KYW Newsradio
By Mike Dougherty, KYW Newsradio

NATIONAL PARK, N.J. (KYW Newsradio) — Excavators working at a historic battlefield have unearthed human remains, believed to be from soldiers killed in the Revolutionary War about 245 years ago.

Rowan University opened the excavation of a newly-acquired section of Red Bank Battlefield Park in Gloucester County to the public.

Some guy found a gold coin. Then somebody found a bone. Then lots of bones.

The initial discovery of a King George III gold guinea, a month’s salary for a soldier, was extremely exciting for everyone involved.

This coin is a King George III gold Guinea, a one month salary for a soldier, and it was the first item discovered by a volunteer. Then they found bones — lots of them. Full skeletons as well as random body parts tossed in the trench. This was a brutal fight & key to USA victory pic.twitter.com/euPyKx0m16

“The trench that we are in now, we went down about 4 ½ feet deep, and we hit the bottom of it, and that is where we found the bulk of the military material,” Red Bank Battlefield Director and Rowan history professor Dr. Jennifer Janofsky.

She said it was very clear when they hit the trench floor. It was much more compacted, almost like concrete, compared to the rest of the fill material.

They also found 20 musket balls, likely fired from Americans, lodged in or very close to some of the bones.

“Was this somebody who was killed actually in the trench trying to attack the fort? Or was this a situation where remains were distributed around the battlefield and it was a convenient burial spot?” Janofsky wondered.

“This is something we will have to explore as we continue to research the project.” 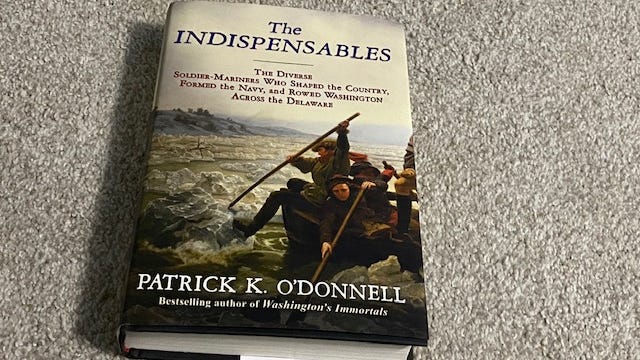 Marblehead Regiment were 'Indispensables’ of the American Revolution

Cannonballs attached with chains, which were normally used to take down ships, were fired at people with devastating results. The victory for the Americans on Oct. 22, 1777, was key to preventing the British from advancing up the Delaware River to Philadelphia.

Archeologist Wade Catts says it was emotional to see a mass grave like this, and a discovery they didn’t expect to stumble upon.

“The space we excavated is about 10 feet wide and the ditch at the bottom is about 13 feet across. There were body fragments commingled with other fragments,” Catts said.

“We had bodies that were probably rolled down from the top of the wall and stacked. In some cases, we have only femurs, only arms, only heads or skulls.” 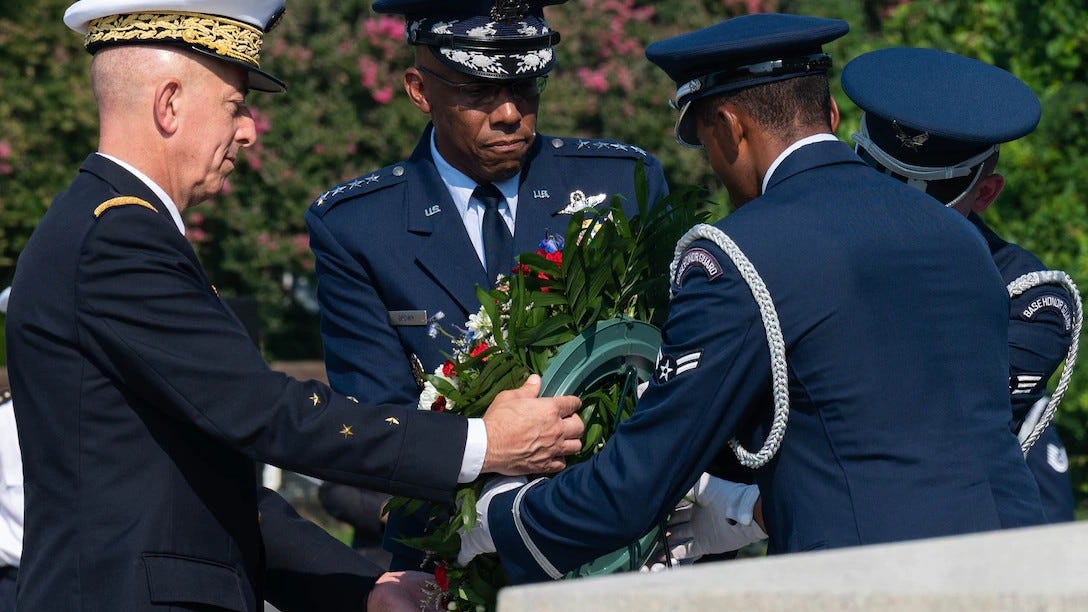 Commemorating the American and French victory at the Battle of Yorktown

Catts says many of these body parts had fractures, cracks, and other obvious signs of trauma showing these men didn’t die peacefully.

What happens now? Well, Catts says it’s like the first chapter of a book, and he doesn’t know how it ends.

New Jersey State Police have taken the remains to be stored securely and analyzed with state-of-the-art technology.

NJSP Forensic Anthropologist Anna Delaney will be looking at all sorts of evidence to determine who these men were, and get as much information as she can from the DNA samples that are available.

“I’d like to pull in forensic photography if we have any skulls that have complete faces to them and maybe reconstruct a face if possible,” Delaney said. She also plans to work with some outside resources on genealogy and other scientific analyses. 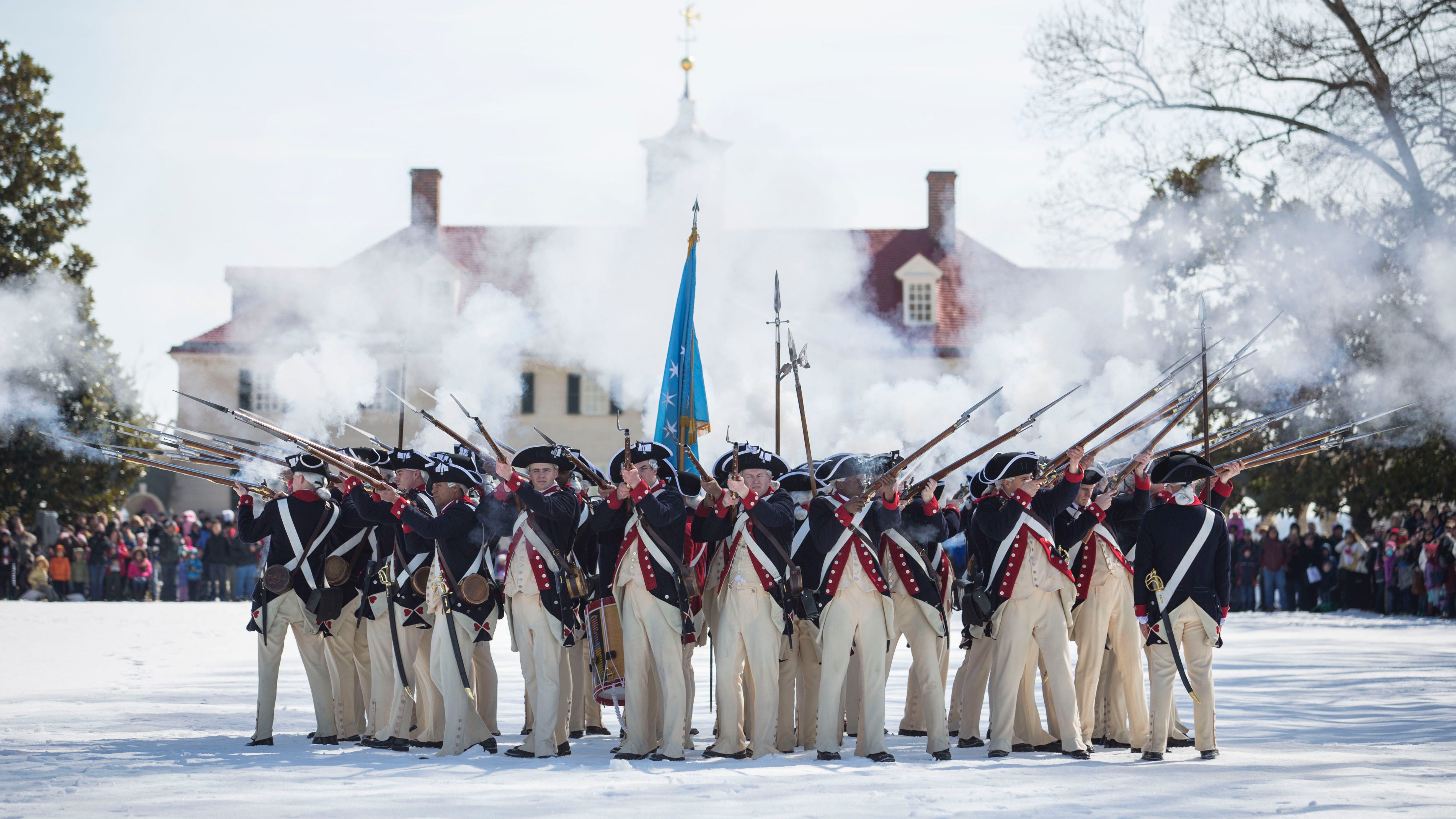 Her eyes lit up a little when I asked if she was kind of geeking out about the opportunity to do this.

“I’m thrilled. This is something I never thought that I would actually get to be a part of,” she said. “To be able to sit here and excavate these remains and put my skills to use has been completely amazing.”

Dr. Janofsky says the ultimate goal is to be able to put names and faces to the remains, to tell the stories of the individuals.

“That, to me, is a very powerful moment in public history,” she said.

“We now have the opportunity to work with our visitors to understand the emotion, pain, loss, and absolute horror of war.”