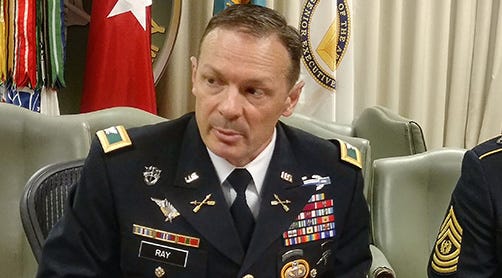 On the evening of December 27th, Colonel Owen G. Ray was arrested by the Lakewood Police Department on charges of making death threats, assault, false imprisonment, and malicious mischief related to a domestic violence incident according to publicly available records from Pierce County, Washington.

Colonel Ray had been the commander of 1st Special Forces Group at Joint Base Lewis McChord up until he rotated out over the summer and assumed a position as the I Corps Chief of Staff under Lt. Gen. Randy George.

A spokesman for USASOC declined to comment on the matter and a response was not received from the I Corps Public Affairs Officer at the time of publication.

According to an official Army website, Ray served at every level at 1st Special Forces Group.

"He served as a detachment commander in 2003 and as a company commander in Afghanistan in support of Operation Enduring Freedom in 2011. In 2013, Ray commanded the 4th Battalion, 1st SFG (A) and deployed as part of the Special Operations Joint Task Force," a press release about Ray assuming command of 1st Group reads.

"Col. Ray comes with a wealth of experience, knowledge and understanding of this group's mission set," 1st Special Forces Command's commanding general, Maj. Gen. E. John Deedrick said at the time. "He is certainly a proven warrior that fights alongside his men and I have no doubt the group will benefit from his leadership."

A press release from Pacific Command (PACOM) about the importance of Special Forces building relationships with friendly nations mentions that Ray had a role in helping to create the Light Reaction Regiment in the Philippines twenty years ago. The Philippine counter-terrorism unit experienced tough fighting in Malawi with minimal U.S. support.

"Our approach is to work multi-laterally," Ray said of these partnerships, "to bring in different partner nations to focus on their ability to defend their own sovereignty, to build their resilience to coercion."