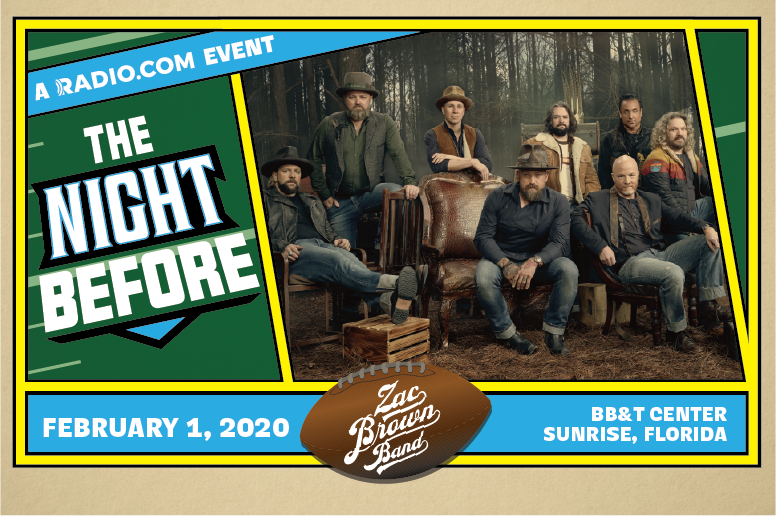 Before the big game, RADIO.COM is throwing a big party with Zac Brown Band.

It’s the 5th annual edition of The Night Before, celebrating the biggest weekend in sports with the ultimate pre-game concert, this year starring the group at the BB&T Center in Sunrise, Florida.

Nobody has done a better job at blending the worlds of Country and Rock than Zac Brown Band, among the most respected in any genre thanks to their world-class musicianship and unforgettable live show. Since winning the GRAMMY for Best New Artist a decade ago, the band has become a must-see and an unshakable force across the world of music.

In September they released their 6th studio album, The Owl, finding the group digging deeper into personal experiences and further cementing their adventurous attitude when it comes to creating. On The Owl, the band enlists artist like EDM pioneer Skrillex and pop superstar Shawn Mendes to help tell their story, delivering their most vulnerable and diverse collection to date.

“We are always pushing ourselves as musicians by blurring genre boundaries and incorporating all kinds of music we are personally inspired by, elevating what we are capable as a group” Zac Brown shared in a statement earlier this year. “’The Owl’ is exciting, raw, and unexpected. We couldn’t be prouder of what we’ve accomplished on this record.”

Tickets for RADIO.COM’s The Night Before are on sale everywhere starting Friday December 20 at all Ticketmaster outlets.

Kickoff the weekend with Zac Brown Band at The Night Before on Saturday February 1, with RADIO.COM.