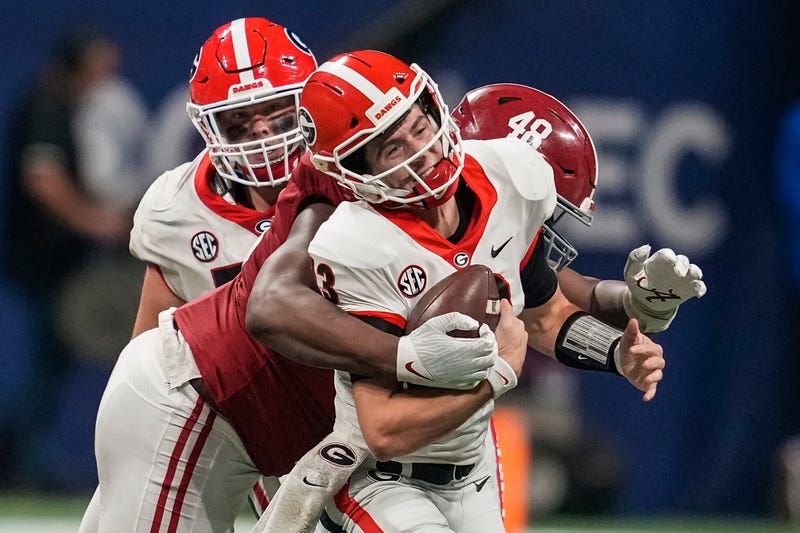 It’s Alabama vs. Georgia for the National Championship; Airing Locally on ESPN Upstate

ESPN Upstate will be your exclusive local home in the Upstate for the College Football Playoff National Championship Game Monday night, 1/10. Coverage begins at 7:00pm, immediately following the conclusion of Offsides with Marc Ryan & Diesel, on ESPN Upstate. 97.7 FM in Greenville. 97.1 FM in Spartanburg.
And wherever you are on the Audacy App (free; just search ESPN Upstate).

This national championship matchup marks the second time in five years these two teams have faced off with the sport’s biggest prize on the line. In that one, Georgia raced out to a 13-0 halftime lead, only to see it evaporate over the game’s final two frames when Nick Saban replaced an ineffective Jalen Hurts with Tua Tagovailoa. The game went into overtime tied at 20 apiece, and after a Georgia field goal, Alabama shocked the football world when Tagovailoa connected with true freshman DeVonta Smith on 2nd and 26 for a 41 yard touchdown pass and the winning touchdown.

This year, it was always supposed to be Alabama vs. Georgia.
Again. That notion was temporarily derailed when Alabama fell in College Station to Texas A&M 41-38 on October 9th. Despite some harrowing 4th quarters that almost saw the Crimson Tide dynasty toppled, including a most improbable overtime win in the Iron Bowl against Auburn, Alabama has found its form.

As a 6.5 point underdog in the SEC Championship Game, Alabama throttled the unanimous #1 Georgia, 41-24. In that contest, Alabama outgained Georgia 536-449 and even managed to outrush the Bulldogs. Saban has since continued his unbelievably impressive stretch in playoff games, topping #4 Cincinnati, 27-6. Given the extra time to prepare, Saban has proven difficult to beat. This appears to be an Alabama team who has flipped the switch.

In the second rendition of CFB’s two best teams, Georgia must make adjustments to avoid a similar fate. Quarterback Stetson Bennett was outstanding against Michigan in the CFP Semifinal, completing 20 of 30 passes for 313 yards and a 3 TD to 0 INT line. That Stetson Bennett is needed, as opposed to the one who threw two interceptions last time out against Alabama.
Also look for the Bulldogs to establish ground dominance. They averaged almost 50 yards per game more on the ground than Alabama did this season, 194.6 yards per game to 147.6. In the SEC Championship Game, Alabama made Georgia one dimensional, with the game, score, and time rendering a running game moot. For Georgia to be victorious this time around, at simply can’t happen.

Georgia enters the game as a 2.5 point favorite, but I just can’t shake the vivid images of what took place last time around. Alabama toyed with the nation’s #1 scoring defense, and hung 41 on a unit that has given up an average of 9.5ppg all season. I don’t believe that’s something mere adjustments can correct. And whereas the revenge factor is an advantage for Georgia, no coach is more in tuned with the mentality and the proper messaging to give his team than is Nick Saban. He’ll have his Crimson Tide ready, and Alabama will win yet another National Championship.

I’m Marc Ryan, and I approve this message.