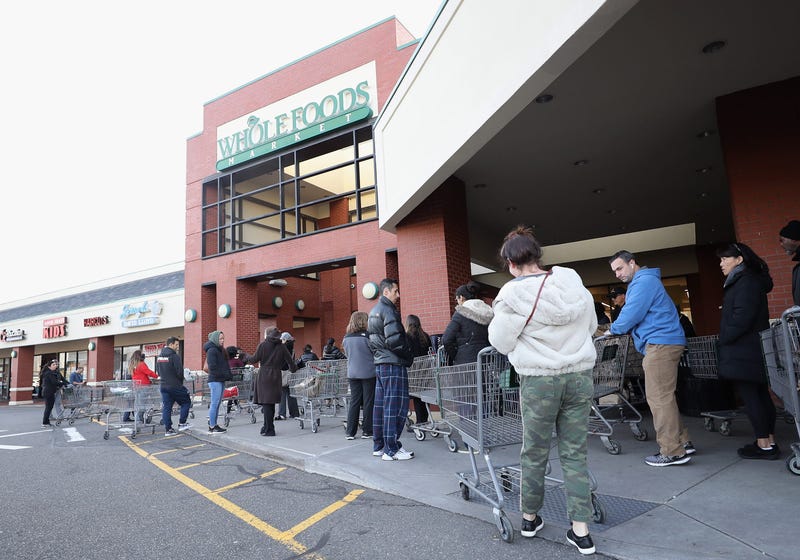 Photo credit Bruce Bennett/Getty Images
By All News KCBS Radio , KCBS All News 106.9FM and 740AM

Whole Foods workers are planning a "sick-out" Tuesday as they demand benefits tailored to the unique circumstances of the coronavirus outbreak.

Employees of Whole Foods have called for paid leave for any worker who has to self-isolate and hazard pay for shifts in the upscale grocery store throughout the coronavirus outbreak.

There is no union representation for most of these workers, which raises a number of labor relations questions for these workers, according to Michael LeRoy, a professor of labor and employment at the University of Illinois.

These employees could potentially turn to the Occupational and Health Safety Administration with a "work refusal" rule, LeRoy said..

“An employer can not fire someone if they are refusing a work order when the employee has a belief that their life is on the line or could incur serious injury.” said LeRoy.

Similarly, under the National Labor Relations Act, there’s a provision for a walkout under abnormally dangerous conditions.

LeRoy says that while these safety provisions exist, history has shown that it’s been very difficult for workers to prevail in court. He studied cases of support and utility workers after 9/11 being put in hazardous conditions. Those examples pose challenges, he said.

“The case law is not good for employees,” said LeRoy, “they don’t lose all of these cases. But I’ve found that they lost most of these cases with courts saying that if you work in an already dangerous occupation it goes with the territory.”

The current coronavirus pandemic provides unique circumstances that may differentiate these workers' cases. LeRoy says that because a grocery worker is not typically considered a dangerous occupation, rather one that has become dangerous because of the current conditions, it could provide grounds for the evolution of the case law.

“When we’re looking at folks who have no reasonable expectation of being exposed to death or serious injury as a consequence of working, I think that puts it on a different footing.” said LeRoy.

The designation of being an employee of an ‘essential business’ could also play a role, but LeRoy cautions that courts may also take a different perspective, saying that the societal risk is equally dangerous for everyone.

“They could compare it to the general population and say that, one way or another, you are exposed to the risk,” said LeRoy.

LeRoy also foreshadows that another labor issue on the horizon will be that of worker’s compensation, with doctors and nurses that were exposed to the virus having the potential to file claims.

music
Massive party at R&B singer Chris Brown's Tarzana home broken up by LAPD
music
Willow Smith gives her mom a Mother's Day surprise by performing with her metal band, Wicked Wisdom
music
Harry and Meghan's son Archie turns 2! See the birthday wishes from the royal family
music
Tyrese went from shaving his girlfriend to being a singing porcupine in less than a week
news
Disney World's Star Wars hotel has ‘Supper Club in Space’ with food that is out of this world
music
Ed Sheeran is now sponsoring his hometown soccer team with new kit