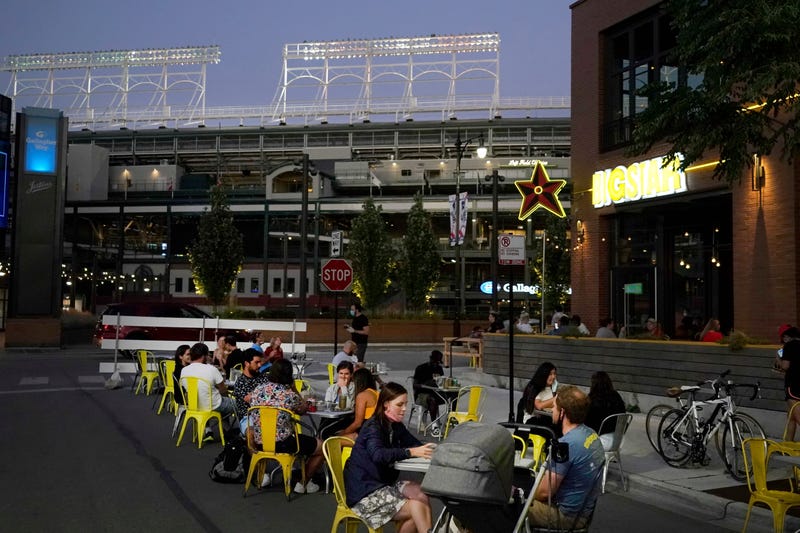 Photo credit Patrons at the Big Star Wrigleyville restaurant Friday, Sept. 4, 2020, are seated in a social distant manner on West Patterson Ave., across from Wrigley Field during a baseball game between the Cubs and St Louis Cardinals in Chicago. The pandemic has been especially hard on businesses that rely on ballpark traffic, eliminating crowds at major league games, and leading to rules that limit the amount of people they can have inside their doors at the same time. (AP Photo/Charles Rex Arbogast)
By The Associated Press

Sure, their lights are on as Major League Baseball tries to squeeze in a truncated 60-game season in the middle of a pandemic. But no one is home save for a few dozen players running around in masks under the din of artificial crowd noise in front of a handful of well-positioned cardboard cutouts.

Step outside the gates, and the artifice evaporates. Reality sets in.

As MLB sprints through two months trying to provide a small semblance of normalcy to its fan base and much-needed fresh content to its broadcast partners, the businesses in the neighborhoods surrounding the stadiums that rely so heavily on thousands making their way through the turnstiles 81 times a year are struggling, their futures murky at best. According to the ADP Research Institute, firms with fewer than 500 employees – a much-used cutoff for small businesses -- have lost more than 5.4 million jobs, or nearly 9%, since February.

It's those kinds of businesses that serve as the lifeblood at downtown stadiums.

The bars and restaurants around Wrigleyville in Chicago's North Side managed just fine during a World Series drought that lasted a century. Some of them might not make it to the other side of the pandemic. The walk to Progressive Field in Cleveland now resembles a trip through a ghost town, with doors locked and windows boarded up.

“We rely on that 40,000-fan-a-game foot traffic and seasonal tourism each year in order for us to be successful, and unfortunately all of us right now are witnessing what life is like on the polar opposite side of that," said Cristina McAloon, the director of retail for Wrigleyville Sports. Outside Fenway Park, parking spaces that go for $60 during a Red Sox home game can be had for $10 now. The pop-up village on Jersey Street that organically materializes from April through September has vanished. Souvenir shops stand idle. The postgame crowd that flows in singing “Sweet Caroline” under their breath is back home watching on TV.

Desperate for help, businesses in the Bronx are are even begging for assistance from the Yankees themselves. A local community leader is organizing a protest before a game on Thursday. He wants the team to provide $10 million in aid to shops around the storied Stadium.

While some of those spots fighting for survival have been around for decades, Mike Sukitch is simply hoping to make it through his first year. Sukitch opened the North Shore Tavern across from PNC Park in Pittsburgh in January. He expected a challenge while returning to the neighborhood where he grew up. He didn't expect to be closed for three months, though he knows he's got it better than most others in the area who have shuttered for good.

As he talks, Sukitch — like so many of his brethren spread across the country — tries to sound optimistic. It's practically a job requirement when so much of what happens outside city-centered stadiums depends on what happens inside.

Right now, that's not much. Actually, it's less than that. For many, it's time to turn to that familiar refrain, one that feels less like some well-worn cliche and instead serves a mantra for survival.

Wait till next year.