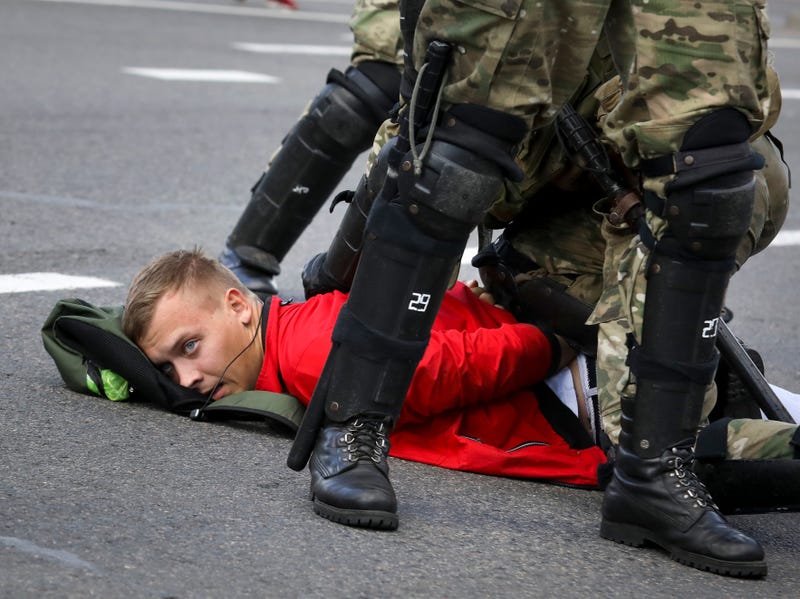 KYIV, Ukraine (AP) — The main opposition candidate in Belarus' disputed presidential election said Thursday that activists are compiling a list of law enforcement officers who were allegedly involved in violence against protesters denouncing the results of the vote.

Nearly 7,000 people were detained and hundreds were brutally beaten by police during the first several days of post-election protests in Belarus that are now in their sixth week. Opposition supporters claim the Aug. 9 vote was rigged to reelect President Alexander Lukashenko to a sixth term and are demanding his resignation.

Lukashenko's main challenger in the election, former English teacher and political novice Sviatlana Tsikhanouskaya, said Thursday that the opposition was drawing up a list of individual officers involved in the police crackdown.

“We have been given the names of those who were beating and torturing people,” she said in a statement. “We are preparing a list of officials and law enforcement officers who have taken part in lawless repressions.”

Human rights groups are working with opposition activists to identify the officers and officials, Tsikhanouskaya said, adding that the list will be shared with the United States, the European Union and Russia.

Tsikhanouskaya, who left for Lithuania in the wake of the election under pressure from Belarusian authorities, said the opposition will name the list in honor of Alexander Taraikovsky, a protester who died in Minsk the day after the election as police dispersed peaceful demonstrators.

Authorities initially said an explosive device Taraikovsky intended to throw at police blew up in his hands and killed him. However, Associated Press video showed he was not holding any explosives when he fell to the ground, his shirt bloodied.

Belarusian authorities later acknowledged that Taraikovsky might have been killed by a rubber bullet. The street in the capital of Minsk where Taraikovsky died turned into a pilgrimage site, with thousands of people, including European ambassadors, laying flowers there.

After the initial broad crackdown on protests, Belarusian authorities changed tactics and tried to end displays of dissent with the selective detentions of demonstrators and the jailing of opposition leaders.

The U.S. and the EU have criticized the presidential election as neither free nor fair, and urged Lukashenko to start talks with the opposition — a call he has rejected. Washington and Brussels have been pondering sanctions against Belarusian officials for alleged vote-rigging and the violent response to protests.

Russia, Lukashenko's main ally and sponsor, has maintained staunch support for the Belarusian leader. Moscow announced this week it would offer a new $1.5 billion loan to his government.

Vladimir Isachenkov in Moscow contributed to this report.

Follow all AP stories about the turmoil in Belarus at https://apnews.com/Belarus