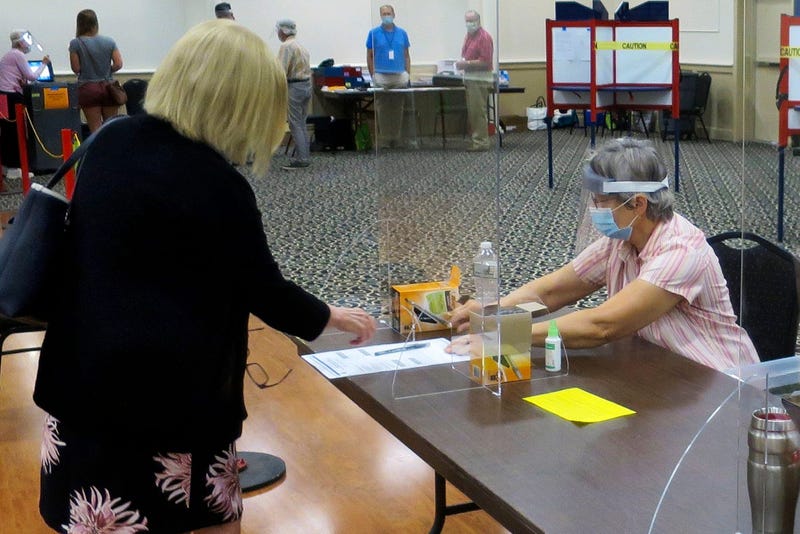 Photo credit FILE - In this July 14, 2020, file photo, election worker Adonlie DeRoche, seated, wears a mask and face shield behind Plexiglas for safety during the coronavirus pandemic, while handing a ballot and single-use pen to a voter during the primary election in Portland, Maine. Thousands of U.S. election officials are busy sharing creative ideas they hope will keep voters and polling places safe from infection. (AP Photo/David Sharp, File)
By The Associated Press

COLUMBUS, Ohio (AP) — The coronavirus has upended everyday life in ways big and small. What happens when those disruptions overlap with voting? Thousands of state and local election officials across the U.S are sharing ideas and making accommodations to try to ensure that voters and polling places are safe amid an unprecedented pandemic.

Here are virus-related obstacles voters could face during this unprecedented presidential election year along with some of the solutions being tried:

What if you need a voter registration form or absentee ballot application and all the normal go-to places are closed or open by appointment only? It's a problem nationwide.

The most recent American Library Association survey found that 62% of U.S. libraries, which are sources for voting documents, were fully closed while another 26% were offering only curbside service. Likewise, the vast majority of state motor vehicle departments — the largest source of voter registrations nationally and of the voter IDs needed in some states — are operating on limited hours, at reduced capacity or by appointment only, according to the American Association of Motor Vehicle Administrators. Appointments in New Mexico, as just one example, are being scheduled two months out.

Benjamin Hovland, chairman of the U.S. Election Assistance Commission, said 40 states have online voter registration, a particular benefit during the pandemic. The commission has beefed up its website, www.vote.gov, with links to register in all 50 states. Among states, Ohio has earned points for its creativity. Republican Secretary of State Frank LaRose struck partnerships with grocers and newspapers to distribute absentee ballot applications this spring, and he's tapped breweries to promote voter registration in the fall: "Beer drinking and democracy go together,” he said of the program, noting the pivotal role of pubs in Colonial America.

Perhaps the most pressing worry of most voters is how polling places will be kept virus-free. A CDC study conducted after Wisconsin's primary, the first in-person election after states began issuing stay-at-home orders, found 37 of the state's new COVID-19 cases in the days after the election were among voters, a warning to other states.

As an example of how seriously they're responding, California issued 50 pages of instructions to its election boards last month calling for site-specific virus prevention plans and extensive training. That's on top of CDC-recommended guidelines that include social distancing, wearing masks and frequent hand-washing.

In Maine, single-use pens have replaced the usual “I Voted” stickers for marking the occasion Nov. 3. South Carolina has piloted ear swabs for touchscreen voting, while Indiana and Louisiana are among states offering latex finger coverings. Voters might see Plexiglas shields at some check-in tables, and poll workers dressed head-to-toe in protective gear. Voting machines and poll books will be sanitized on a regular schedule throughout the day.

Public-private partnerships also are taking shape. Anheuser-Busch, the beer maker, is distributing 8 million ounces of hand sanitizer in coordination with the National Association of State Election Directors and others. Sanitizer is expected to be placed liberally around polling places. In Ohio, manufacturer RB Sigma has donated more than 450,000 surgical masks for use by poll workers and voters.

What if you plan to vote in person but receive a positive COVID-19 diagnosis, and it’s too late to request a mail-in ballot? Or perhaps you've traveled out-of-state and gotten held up by a virus-related travel restriction.

Planning ahead to vote early or by mail is still the best way to avoid getting tripped up by a virus diagnosis, quarantine or travel restriction ahead of Election Day, experts agree. North Carolina Gov. Roy Cooper said his state is working to open more early voting locations to accommodate such concerns.

Dealing with voters who are sick is nothing new. In Alaska, for example, anyone unable to vote in person because of age, illness or a disability can appoint a personal representative to pick up and deliver their ballot. Many states provide similar options for emergencies — though often not right up until Election Day. If you simply have no choice, election officials say to show up at your polling place, and you will be accommodated. Separate voting stations, far from the rest, are being set up where possible to accommodate those who know or suspect they’re infected with the virus and decide to self-report.

Ari Schaffer, a spokesman for Georgia Secretary of State Brad Raffensperger, said State Farm Arena in Atlanta is large enough to have a separate voting station for those who have a positive COVID-19 test, though not all polling locations will be.

In Iowa, curbside voting already available to voters with disabilities was expanded to other vulnerable voters during the primary. Polling locations also were consolidated in some cases into larger venues, such as school gymnasiums, auditoriums and stadiums, to allow for social distancing.

WHAT ABOUT UNMASKED VOTERS?

What if you, or a fellow voter, choose not to wear a mask, as election and health officials are pretty much universally recommending?

States are mostly stopping short of requiring masks on Election Day because voting is a protected right. The most common scenario envisioned is that voters who decline to wear a mask will be offered one. If they refuse it, they'll be directed to a voting station away from other voters, where possible. In some locations, no other voters would be allowed inside until the person has voted.