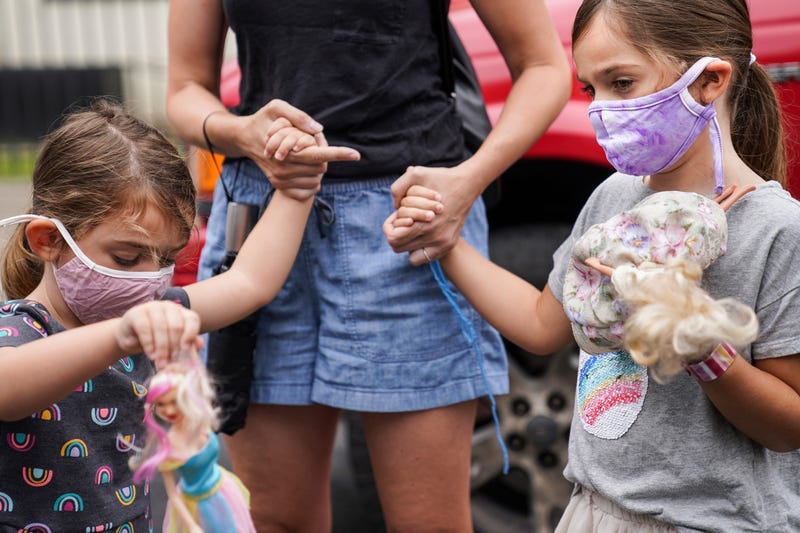 Photo credit FILE- In this Sept. 2, 2020 file photo, parents bring their children to participate in an outdoor learning demonstration to display methods schools can use to continue on-site education during the coronavirus pandemic, at P.S. 15 in the Red Hook neighborhood of the Brooklyn borough of New York. New York City's already delayed school year is scheduled to start remotely Wednesday, Sept. 16, 2020 in a soft opening that will serve as a prologue to the return of students to physical classrooms on the following week. (AP Photo/John Minchillo, File)
By The Associated Press

NEW YORK (AP) — New York City's already- delayed school year started remotely Wednesday in a soft opening that will serve as a prologue to the return of students to actual classrooms next week.

Even as more than a million kids remotely return to class, it's an open question whether the city can pull off the hybrid learning system Mayor Bill de Blasio announced in July.

Unions representing teachers and principals in the nation's largest public school district say schools still don't have the teachers or the coronavirus safety measures that are needed, but de Blasio, a Democrat, insisted that the school year would start as planned with three days of online orientation this week.

Students began returning to physical classrooms Wednesday for the first time since March, when COVID-19 forced the closure of schoolhouses in New York and much of the rest of the nation.

The reopening comes as an average of about 240 people a day are still being diagnosed with the coronavirus in New York City, one of only a few large U.S. cities attempting to start the school year with students in real classrooms.

Under de Blasio's plan, the majority of students will be in their schools between one and three days a week and home learning on screens the rest of the time. About 42% of families have requested online-only instruction.

All students were supposed to connect with teachers and classmates online in a three-day orientation starting Wednesday that will focus on students' social and emotional well-being and lay out some of the practicalities of how this unprecedented school year will work.

Catarina Garcia said the first day of kindergarten for her son, Jayden Rosario, consisted of an hourlong video conference with his teachers at Public School 33 in Manhattan.

“Overall, they did a good job,” Garcia said. “It was a lot of reading, talking and singing. Similar to school, just different because they’re not there.”

Garcia said she chose remote-only instruction rather than sending Jayden into the classroom part time because she fears a resurgence of the virus.

“I’m not going to take the risk of everything popping up,” she said. “My son’s not going to be a test dummy."

Sandrine Plympton, whose son Lucas will start in person school at nearby Public School 11 next week, said Wednesday's video orientation consisted of the teacher meeting the kids and going over how the school year will work.

Lucas, a third grader, said online school is "OK, but sometimes when my hair’s wet I feel like it’s embarrassing. So I turn off the camera.”