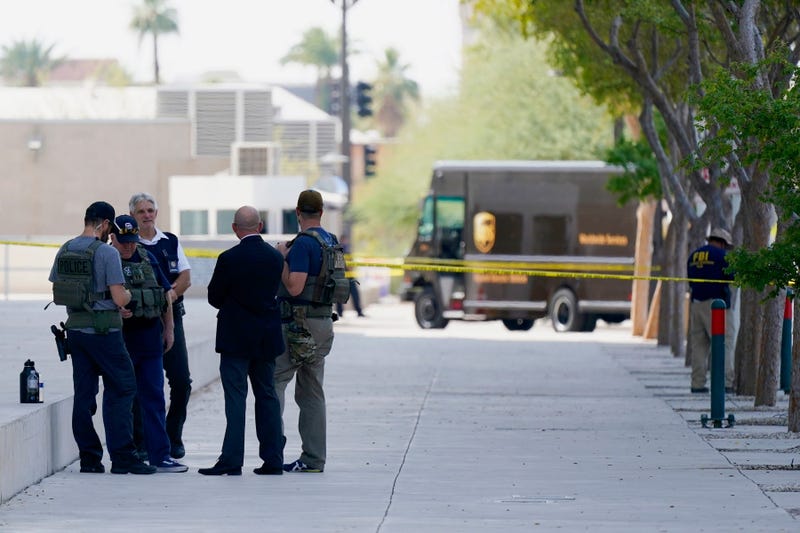 Photo credit Federal law enforcement personnel stand outside the Sandra Day O'Connor Federal Courthouse Tuesday, Sept. 15, 2020, in Phoenix. A drive-by shooting wounded a federal court security officer Tuesday outside the courthouse in downtown Phoenix, authorities said. The officer was taken to a hospital and is expected to recover, according to city police and the FBI, which is investigating. (AP Photo/Ross D. Franklin)
By The Associated Press

PHOENIX (AP) — A man accused of opening fire on a federal security officer outside the U.S. courthouse in Phoenix has a long history of mental illness but had never been violent, his ex-wife said Wednesday, a day after she helped turn him in to authorities.

“There's no explanation for it. He's sick,” Donna Gonzales told The Associated Press. “Hopefully, he's getting the help he needs.”

A criminal complaint filed in U.S. District Court said James Lee Carr, 68, opened fire Tuesday because he said he felt the federal officer “was harassing him." The officer was inspecting a UPS truck heading into the courthouse when someone in a car yelled, “Hey,” and then fired three shots, according to the complaint.

One round struck the officer, who returned fire, shooting roughly eight rounds as the driver fled in a silver Cadillac.

The officer was hit in a protective vest, city police and the FBI said.

Colleen Grayman, a spokeswoman for the U.S. Marshals Service in Phoenix, said the security officer was released from the hospital Tuesday and was at home recovering.