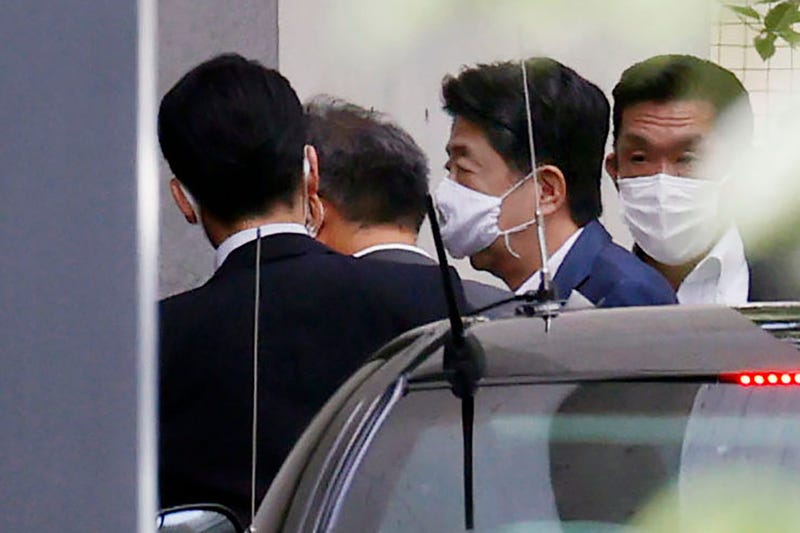 Photo credit Japanese Prime Minister Shinzo Abe, center right, arrives at Keio University Hospital in Tokyo Monday, Aug. 24, 2020. Prime Minister Abe on Monday became Japan's longest-serving leader in terms of consecutive days in office, but there was little fanfare, as he visited a hospital for another health checkup amid concerns about his health.(Kyodo News via AP)
By The Associated Press

TOKYO (AP) — Prime Minister Shinzo Abe on Monday became Japan's longest-serving leader in terms of consecutive days in office, but there was little fanfare, as he visited a hospital for another checkup amid concerns about his health.

Abe marked his 2,799th consecutive day in office since returning to leadership in late 2012 for a second term, surpassing the previous record set by Eisaku Sato, his great-uncle, who served 2,798 straight days from 1964 to 1972.

His first term ended abruptly 13 years ago because of health problems, fueling concerns about his current condition. The prime minister made a hospital visit for the second week in a row on Monday.

Abe later told reporters that he revisited the hospital “to get detailed results from last week's checkup and have additional examination.”

“I'm making sure I'm in good health, and I plan to keep working hard,” Abe said, adding that he will explain his health later.

The previous Monday, he spent more than seven hours at Keio University Hospital in Tokyo for what officials said was an additional checkup because he didn't have enough time during his earlier visit in June.

Last week's hospital visit triggered a flurry of speculation in the Japanese media about the possibility that his health was declining.

During the past week, he has spent only a few hours a day in his office, only in the afternoon.

Chief Cabinet Secretary Yoshihide Suga, at a regular news conference earlier Monday, brushed off worries about Abe's health. “I see him every day, but I haven't noticed anything different," he said.

Asked if Abe will be able serve another year until his current term ends in September 2021, Suga said the prime minister is undergoing additional health exams to make sure he will be able to do so.

His heath concerns have added to speculation on how much longer Abe may stay in office. His support ratings have plunged to their lowest levels due to his handling of the coronavirus pandemic and its severe impact on the economy, on top of a slew of political scandals.

Abe, since his return to office in 2012, has led his ruling bloc to six national election victories in the absence of viable liberal-center contenders and expanded his influence both at parliament and among bureaucrats, despite criticisms of autocracy.

Abe has also steadily bolstered Japan's defense capability and allowed Japanese Self-Defense Force to do more for its ally U.S. by stretching the interpretation of the pacifist Constitution.

His cherished goal of revising the charter is still unmet, although he has stepped up his efforts to do so before his term ends in September 2021. Abe and his right-wing supporters have long seen the U.S.-drafted war-renouncing constitution as a legacy of Japan’s World War II defeat and humiliation during U.S. occupation.

The end of his scandal-laden first stint as prime minister was the beginning of six years of annual leadership change, remembered as an era of “revolving door” politics that lacked stability and long-term policies.

When he returned to office in 2012, Abe vowed to revitalize the nation and get its economy out of the deflationary doldrums with his “Abenomics” formula.

Opponents have said Abe’s time in office has led to cronyism, autocracy and caused more damage than benefit to democracy.

news
Will you still need to wear masks at chains like Walmart and Target? This is where 15 major retailers stand
music
Tracee Ellis Ross responds to ‘Black-ish’ coming to an end next season: ‘It’s gonna be a good one!’
sports
'Dark Side of Football' series to feature episodes on Bill Belichick, the Browns and more: report
news
Ivanka Trump displays toned abs in sports bra and leggings on beach stroll
sports
MLB insider considers Yankees the ‘most logical’ landing spot for Trevor Story
<a href="http://www.audacy.com/articles/abc-music-news/katy-perry-releases-electric-to-celebrate-pok-mons-25th-anniversary?article=curated" class="trending__item__link spa-link" data-track-type="article-link" data-track-component-name="trending" data-track-page-uri data-track-headline="Katy Perry releases 'Electric' to celebrate Pok&