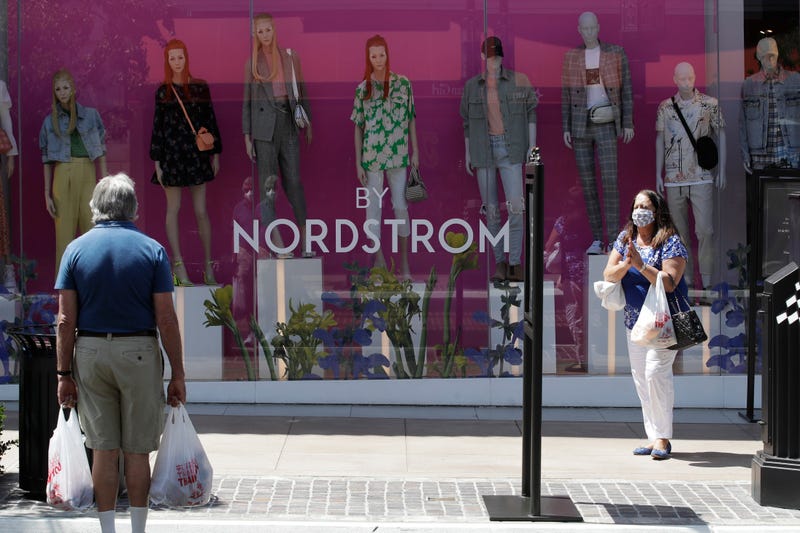 Photo credit FILE - In this Wednesday, May 27, 2020, file photo, shoppers walk past a Nordstrom window display at The Grove shopping center in Los Angeles. On Tuesday, Aug. 25, 2020, Nordstrom Inc. reported a larger-than-expected loss and a 53% drop in sales for its fiscal second quarter, during which the pandemic forced the upscale department store chain to temporarily close its stores. (AP Photo/Marcio Jose Sanchez, File)
By The Associated Press

NEW YORK (AP) — Nordstrom Inc. on Tuesday reported a larger-than-expected loss and a 53% drop in sales for its fiscal second quarter, during which the pandemic forced the upscale department store chain to temporarily close its stores.

The Seattle-based retailer's business was also hurt by the shift of its anniversary sales from the fiscal second quarter that ended Aug. 1 to the third quarter.

Like many department stores and other non-essential retailers, Nordstrom was forced to temporarily shutter stores and furlough workers when the pandemic was declared in mid March. Nordstrom's stores have now reopened but stores were temporarily closed during half of the fiscal second quarter. During the fiscal first quarter, Nordstrom cut inventory by more than 25% to reduce markdowns.

As a result, profit margins on merchandise in the second quarter improved and exceeded the company's expectations. While sales were in line with company expectations, business was constrained by the flow of inventory, which steadily improved throughout the quarter, the company said. In July, Nordstrom increased inventory to meet customer demand,

“At the onset of the pandemic, we focused on protecting and enhancing liquidity, and we successfully executed on these plans,” said Erik Nordstrom, CEO of Nordstrom in a statement. Nordstrom says it has improved its balance sheet with liquidity of $1.3 billion, and it's now pivoting to increase market share and have profitable growth.

Since the pandemic hit, more than 20 retailers have filed for Chapter 11 bankruptcy including some of Nordstrom's rivals like Neiman Marcus and upscale specialty chains like J. Crew and Brooks Brothers.

Nordstrom reported a fiscal second-quarter loss of $255 million, after reporting a profit of $141 million in the same period a year earlier.

On a per-share basis, the Seattle-based company said it had a loss of $1.62.

The results missed Wall Street expectations. The average estimate of 10 analysts surveyed by Zacks Investment Research was for a loss of $1.47 per share.

The department store operator posted revenue of $1.86 billion in the period, which also fell short of Street forecasts. Six analysts surveyed by Zacks expected $2.32 billion. A year ago, Nordstrom posted revenue of $3.78 billion.

Nordstrom shares fell about 4% in after-hours trading following the release of the earnings report. They have declined 62% since the beginning of the year, while the Standard & Poor’s 500 index has increased roughly 7%.

Elements of this story were generated by Automated Insights (http://automatedinsights.com/ap) using data from Zacks Investment Research. Access a Zacks stock report on JWN at https://www.zacks.com/ap/JWN