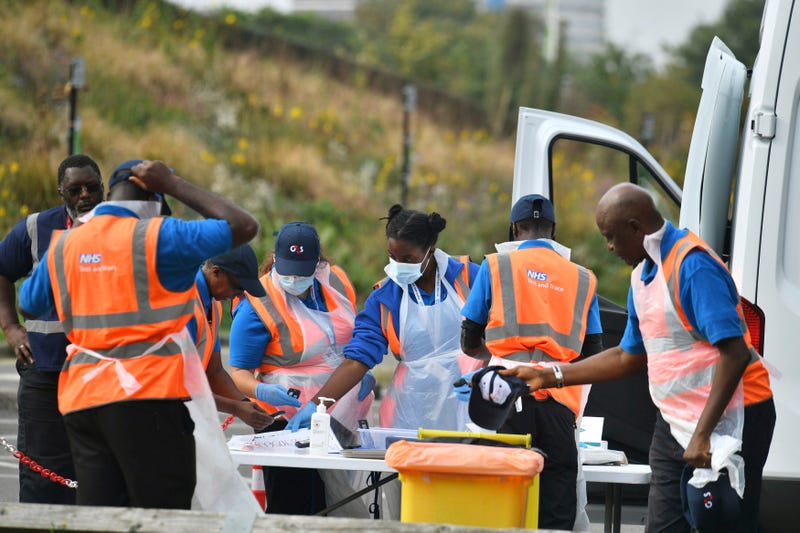 Photo credit Workers prepare ahead of opening at a Coronavirus testing centre in Southwark, south London, Wednesday, Sept. 16, 2020. The British government plans to ration coronavirus testing, giving priority to health workers and care home staff after widespread reports that people throughout the country were unable to schedule tests. Prime Minister Boris Johnson on Wednesday will face questions about his handling of the COVID-19 pandemic in the House of Commons and before a key committee amid the outcry over the shortage of testing. (Dominic Lipinski/PA via AP)
By The Associated Press

LONDON (AP) — U.K. lawmakers criticized the government's handling of the COVID-19 testing crisis for a second day Wednesday as opposition leaders said Prime Minister Boris Johnson lacked a cohesive plan to tackle the virus as the country faces a second wave in the pandemic.

Johnson defended his efforts to increase testing capacity, telling the House of Commons that the government was responding to a “colossal'' increase in demand and arguing that Britain is testing more people than other European countries. But Angela Rayner, who led the weekly questioning for the Labour Party, said he should “get some skates on” to ensure the country is ready for the colder winter months ahead when infection rates are expected to soar.

“They’ve had six months to get this right and yet the prime minister still can’t deliver on his promises," Rayner said. “The health secretary said yesterday it would take weeks to sort this situation out. We don’t have weeks.”

The squeeze on tests comes amid a surge in COVID-19 cases across the U.K. that has pushed daily new infections to levels not seen since late May and has forced the Conservative government to impose limits on public gatherings. Widespread testing is seen as crucial to controlling the spread of the virus because it allows those who are infected to self-isolate while helping health officials identify hot spots and trace those who are infected.

Government ministers said Wednesday they planned to ration coronavirus testing, giving priority to health workers and care home staff after widespread reports that people around the country were unable to schedule tests.

Justice Secretary Robert Buckland told Sky News that the government was drawing up a new priority list for testing, suggesting that students and their families could be next in line after the National Health Service and social care.

“I think what we need to do is have a cascading system where we know where our priority should be, and for me priority should be for children in school and their parents in order to ensure their lives are safe and also importantly they are not disrupted in the way we are seeing,” Buckland said.

Over the past two days, lawmakers from all parties have bombarded ministers government with a litany of complaints from constituents desperate to get tests so they can return to school or work and visit elderly loved ones.

Health Secretary Matt Hancock told the House of Commons on Tuesday that it may take weeks to sort out the problems. In the meantime, people have been turning up at emergency rooms due to the lack of availability of testing, with one hospital official in the northwestern city of Bolton saying that 100 people showed up seeking a test in recent days.

The Association of School and College Leaders warned that schools could struggle to remain open unless testing capacity increases as more cases emerge.

“Teachers need to be counted as key workers in order that you can at least keep that maths teacher in front of 30 young people if their test is negative,” Geoff Barton, the group’s general-secretary, told the BBC.