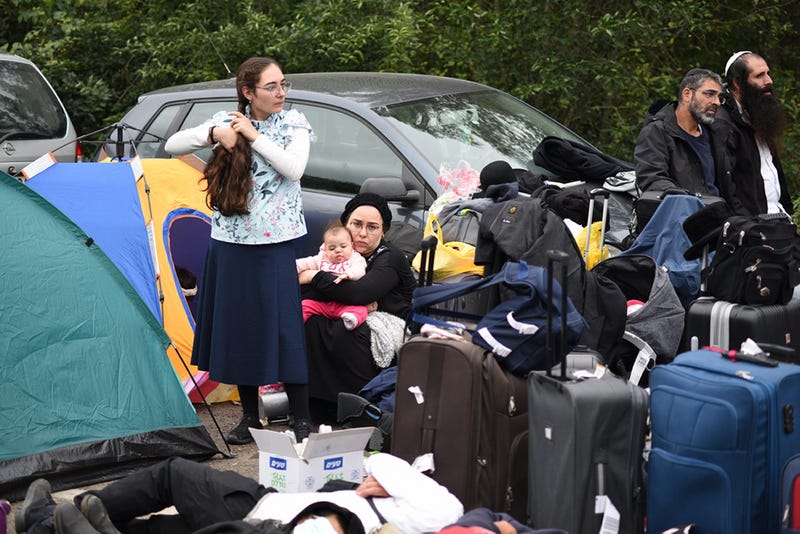 Photo credit Jewish pilgrims gather on the Belarus-Ukraine border, in Belarus, Tuesday, Sept. 15, 2020. About 700 Jewish pilgrims are stuck on Belarus' border due to coroavirus restrictions that bar them from entering Ukraine. Thousands of pilgrims visit the city each September for Rosh Hashana, the Jewish new year. However, Ukraine closed its borders in late August amid a surge in COVID-19 infections. (TUT.by via AP)
By The Associated Press

KYIV, Ukraine (AP) — Ukraine on Thursday strongly warned thousands of Hasidic Jewish pilgrims who have been stuck on its border for days that it won't allow them into the country due to coronavirus restrictions.

Ukrainian authorities said about 2,000 people have gathered at the border with Belarus, in hope of traveling to the Ukrainian city of Uman to visit the grave of an important Hasidic rabbi who died in 1810, Nachman of Breslov.

Thousands of the ultra-Orthodox Jews visit the city each September for Rosh Hashana, the Jewish new year. It’s celebrated Sept. 18-20 this year, and some pilgrims had managed to get to Uman before Ukraine closed its borders in late August amid a surge in COVID-19 infections. Thousands of others traveled via Belarus, which hasn’t barred foreign visitors from entering.

On Thursday, Ukraine's Interior Ministry official Mykhailo Apostol reaffirmed that the pilgrims will not be allowed to cross the border.

“Ukraine has shut its borders to foreigners, and no exclusions will be made for the Hasidic pilgrims," Apostol told reporters. “It's getting colder and we suggest that they come back to Belarus, buy tickets and go home.”

Also, Israeli Higher Education Minister Zeev Elkin tweeted Thursday that efforts to help the pilgrims enter Ukraine have failed, and called on them to return to Israel.

As thousands of pilgrims spent days in the no-man's land between Belarus and Ukraine, some sleeping in makeshift tents and others on the ground, Ukraine and Belarus bickered over the standoff.

On Wednesday, Ukraine’s presidential office accused Belarusian authorities of issuing misleading signals to the pilgrims that they would eventually be allowed to cross the border. Belarusian officials shot back accusing Ukraine of “inhumane” treatment of the pilgrims, and offered to provide buses to drive the pilgrims to Uman and back to Belarus.

Ukraine has joined the United States and the European Union in criticizing the Aug. 9 vote, in which President Alexander Lukashenko extended his 26-year authoritarian rule, as neither free nor fair and urged Belarusian authorities to end their crackdown on protesters.

Vladimir Isachenkov in Moscow and Ilan Ben Zion in Jerusalem contributed to this report.