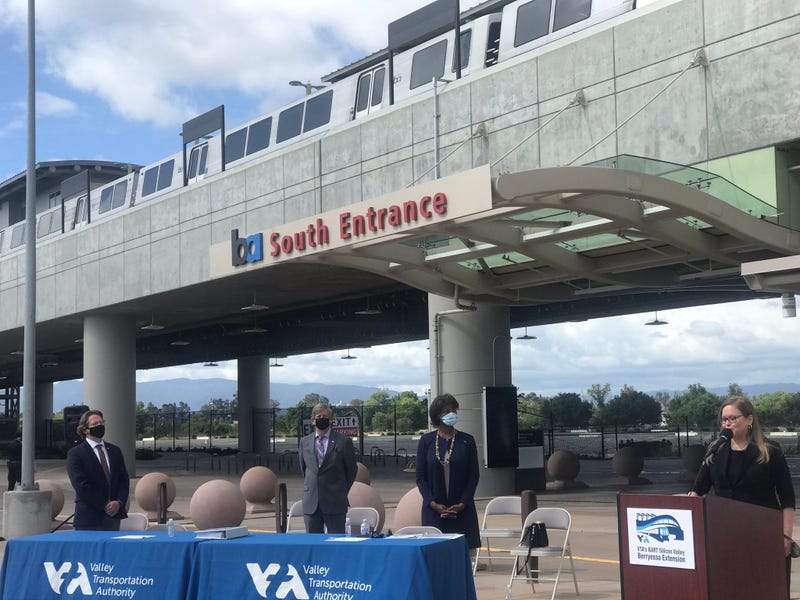 After more than 20 years of planning and work, the long delayed BART extension to San Jose now has an opening date of Saturday, June 13.

“This is a very exciting day,” said Cindy Chavez, President of the Santa Clara County Board of Supervisors at the upcoming Berryessa BART station.

The extension will bring BART into Milpitas and North San Jose two years after the stations were originally scheduled to open. A string of delays pushed that date back several times, but officials now say the work is complete and the last safety checks have been made. All that is left is approval from state regulators.

“We are thrilled that this day has come,” said Lateefah Simon, President of the BART Board of Directors. “This is a dream for so many folks not only standing to the side of me, but tens of thousands of folks who live in these neighborhoods, who not only want to get out of their cars but want a very inexpensive way to travel throughout the Bay Area.”

“Expanding travel options in one of the Bay Area’s most congested corridors is key to an economic revival,” said BART General Manager Robert Powers. “Connecting Silicon Valley to the rest of the Bay Area will not only beef up our public transportation network but create new opportunities for much-needed housing near transit.”

But those corridors are not nearly as crowded at the moment. With the Bay Area still sheltering in place and many people working from home, ridership has dropped by as much as 93% and the transit agency has scaled back service.

“It won’t impact the opening,” said Powers. “We’re going to continue to make BART safe and clean and get riders back into the system… it’s starting to trickle back in.”

The first train is scheduled leave the Berryessa/North San Jose station at 7:56 a.m. on the 13th in the Richmond direction and arrive at the Milpitas station just three minutes later at 7:59 a.m.