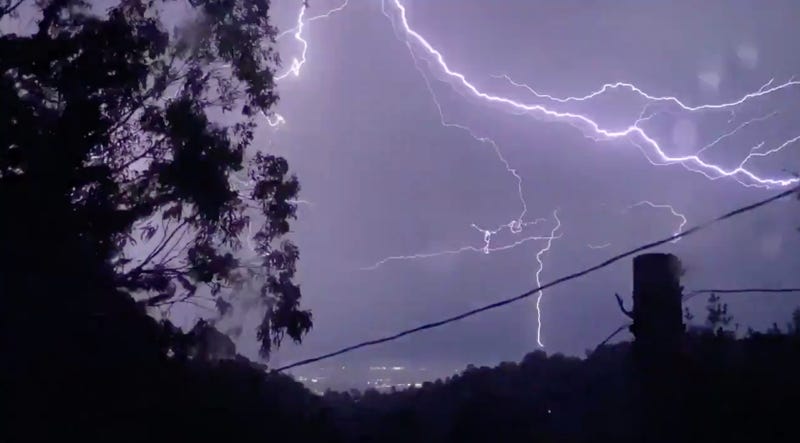 A special weather statement was extended until 9:30 a.m. Monday morning for the Bay Area and down to Monterey, with threats of frequent lightning, wildfires, gusty and erratic winds, downed trees and power lines, possible power outages and difficulty driving due to winds.

Special Weather Statement extended until 9:30 AM PDT. Will continue to evaluate and update as needed.#CAwx pic.twitter.com/nHngkvzdbx

There have been at least ten different blazes Sunday morning, with the largest of them in Livermore at about 50 acres.

Just before 5:30 a.m., Cal Fire reported the Arroyo fire in South Livermore. As of 6:50 a.m., the fire has burned 50 acres and is at 50% containment, with crews conducting an extensive mop up due to a Eucalyptus grove.

#ArroyoFire (South Livermore) Firefighters are aggressively attacking the fire and it is holding at 50 acres and at 50% containment. Extensive mop up due to a Eucalyptus grove. @calfireSCU @AlamedaCoFire @LP_FIRE1974 pic.twitter.com/itZQxIpmlj

Images of a large wildfire in the Santa Cruz Mountains were captured by PG&E webcams at around 5:30 a.m.

KPIX-5 reported that there were no immediate details available except that it was in the Bonny Doon area.

The Santa Clara County Fire Department and Cal Fire responded to a vegetation fire on Brush Road in the Redwood Estates area, possibly threatening structures, but at approximately 8:00 a.m., it was reported to be 100% contained.

#BrushFire With an aggressive response to the fire from @sccfiredept @calfireSCU @CALFIRECZU. We have 100% containment on the fire. Thank you to the cooperation of all agencies. pic.twitter.com/ClLKrcc25x

According to the East Contra Costa Fire Protection District. it dispatched all available units to a grass fire caused by dry lightning on Briones Valley Road in Brentwood. Around 8:00 a.m., Cal Fire said crews are currently battling three to five separate fires totaling 50-75 acres with a moderate rate of spread in the Round Valley Area in Contra Costa County.

The Santa Rosa Fire Department said reports of downed trees and power lines, as well as other lightning-related incidents, are being responded to by agencies around Sonoma County.

Cal Fire has yet to confirm whether all fires Sunday morning have been caused by lightning but said that it has crews responding to seven other vegetation fires in Santa Cruz and San Mateo Counties.

Meanwhile, power is out for tens of thousands of people across the Bay Area in hundreds of different power outages. Most of the outages look to be storm-related, with reports of downed and damaged power lines throughout the region. The largest outage currently looks to be in Richmond, with over 5,000 customers affected. About 4,500 customers were effected in San Mateo County. PG&E said they are working on restoring power. This morning's power outages are unrelated to the recent blackouts from hot temperatures and strain on the electrical grid.

Sunday morning's power outages are unrelated to the recent blackouts from hot temperatures and strain on the electrical grid.

Reposting this. Unsure of the fire name, but this is the fire in Livermore near vineyard Rd. pic.twitter.com/aLVlCVLOef

A thread of the storm currently in Santa Cruz pic.twitter.com/wT1eZiPCxL

Erratic and dangerous weather conditions in the Bay Area overnight. Video by @QuanKCBSradio in the #OaklandHills. pic.twitter.com/IiEmSp9dZ1

The National Weather Service has advised the public to move indoors immediately. Cal Fire has reminded the public to maintain a minimum of 100 feet of defensible space around their structures.

This is a developing story. Check back for updates.
Reporting contributed by Andy Clausen and Bejan Siavoshy.