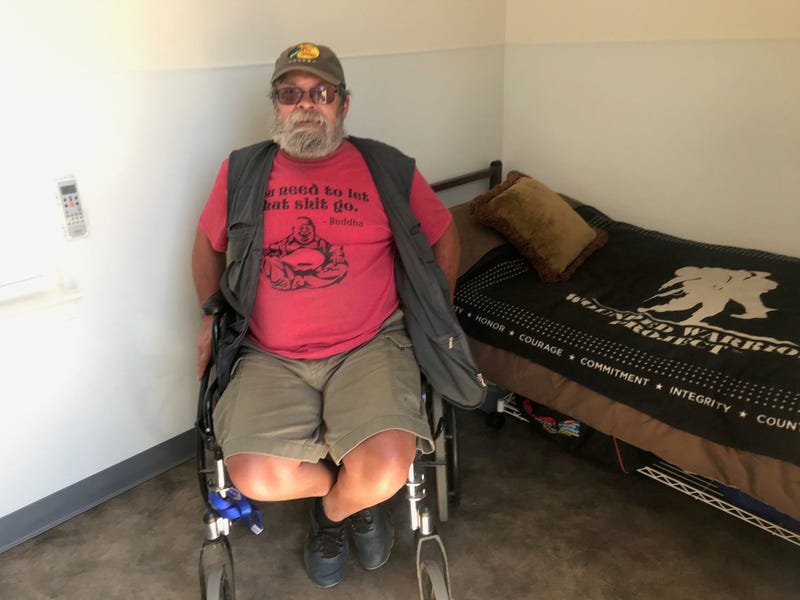 In our new series “Exposure on the Streets”, KCBS Radio takes a closer look at the magnified risks facing the Bay Area’s homeless residents during this pandemic and what is being done to keep them safe. Part One looked at what the unhoused are doing to protect themselves. Part Two looked at the community advocates working overtime to maintain services. Part Three looked at the medical personnel fighting the spread among the homeless.
Today in Part Four, reporter Keith Menconi examines a major bottleneck slowing down efforts to move homeless residents into hotel rooms.

“I get my own house keys. Do you know how much that means to me?” says Mike Lopez of his new 80 sq. ft. personal cabin.

Lopez, who is 58 and suffers from a number of debilitating ailments, is one of the many hundreds of medically vulnerable homeless residents in the Bay Area who have made the move from a communal shelter into more isolated facilities in the hopes of keeping them safe from coronavirus.

But with many thousands of homeless people still sleeping on the streets, advocates are pushing for these transfers to be sped up. That call has only grown louder since the news of an outbreak at a San Francisco shelter last week.

Surprisingly, getting the rooms has not been the issue. The real challenge that’s holding everything up is that there isn’t enough support staff. While it might sound like a minor detail, city officials and many homeless service providers insist that without putting the needed staffing in place, these relocation plans just won’t work.

“Where do you find people?” asks Andrea Urton, CEO of Home First Services in Santa Clara County. Her agency is responsible for Mike Lopez’s new home and needs a few dozen more workers to help run the shelter floors. “What we do is a unique service.”

Other agencies have reported needing to hire more doctors, nurses, caseworkers and cleaners.

Urton says the transition into housing can be very challenging. “They feel alone, they don’t know the people in the shelter, they’re uncomfortable.”

And moving out of an encampment often means leaving your community behind, says Urton. “Imagine being taken from your family during this crisis and isolated in a hotel room where you have no contact with them. That’s hard. That would be hard for any of us.”

That is why having the right staff on hand to meet residents’ needs can make a crucial difference.

As for Lopez, when he talks about the staff that have made his transfer possible he has nothing but gratitude.

“I know they had open hearts, and they were compassionate, and they brought me into a safer environment.”

In the final installment of this series, some advocates say if this is the fastest that the system can move in a crisis, it may be time to get a new system.