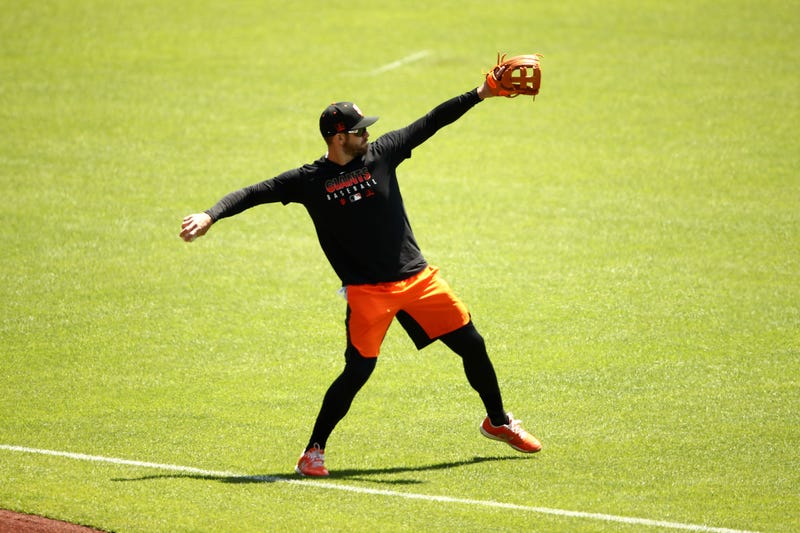 As some front office executives question baseball’s ability to come back safely and complete a virus-shortened season, the nation’s leading expert on infectious diseases thinks playing successfully "could be done," given the correct protocols and procedures.

However, he believes a safe football season is less likely, given the amount of player-to-player contact.

"This is something that the management of Major League Baseball is struggling with," Dr. Fauci said Monday on KCBS Radio. "You know, the situation of creating a bubble where you test everybody and you keep them protected and sequestered from the possibility of exposure inadvertently, particularly from people who are without symptoms. And you continue to monitor them and do surveillance on a regular basis."

Unlike football, which Dr. Fauci remains skeptical about, he sees no reason #baseball can't resume safely: "It could be done, it’s tricky," he tells @KCBSRadio. "I hope that they do it and they do it successfully," telling our #StateOfCA he's offered @MLB advice on #coronavirus.

Major League Baseball released its schedule for the upcoming coronavirus-shortened season Monday, even as several teams postponed workouts because of delayed COVID-19 testing results. Some of the game’s biggest stars, including Los Angeles Dodgers’ pitcher David Price and the Atlanta Braves’ Nick Markakis, have already announced they will sit out the season amid the pandemic.

Others like San Francisco Giants favorite Buster Posey and perennial MVP candidate Mike Trout have said they are considering the same - and will wait to decide as they and their families weigh safety concerns and evolving league protocols.

"Without accurate and timely testing, it is simply not safe for us to continue with summer camp," Nationals general manager Mike Rizzo told the Associated Press. "Major League Baseball needs to work quickly to resolve issues with their process and their lab. Otherwise, summer camp and the 2020 season are at risk." Some of the game’s elder statesmen, like 62-year-old Detroit Tigers Manager Ron Gardenhire, have acknowledged the risk, but also said teams will need to "take care of each other" as the shortened season forges on.

Dr. Fauci, who is perhaps the most visible member of President Donald Trump’s Coronavirus Task Force, believes it’s possible to play baseball safely, even during a nationwide surge in coronavirus cases.

"You could not possibly get a more contact sport than football where literally, on every single play, there’s contact," Dr. Fauci said. "So that, therefore, you really got to monitor the play very, very closely and carefully, because that could spread very easily if someone is infected and doesn't realize they're infected."

The NBA season will resume on July 30 at Disney's ESPN Wide World of Sports complex in Florida, even as positive coronavirus cases continues to rise at a record rate in that state.

The NHL is expected back August 1.

Fauci Warns COVID-19 Cases Could Swell To 100K Per Day