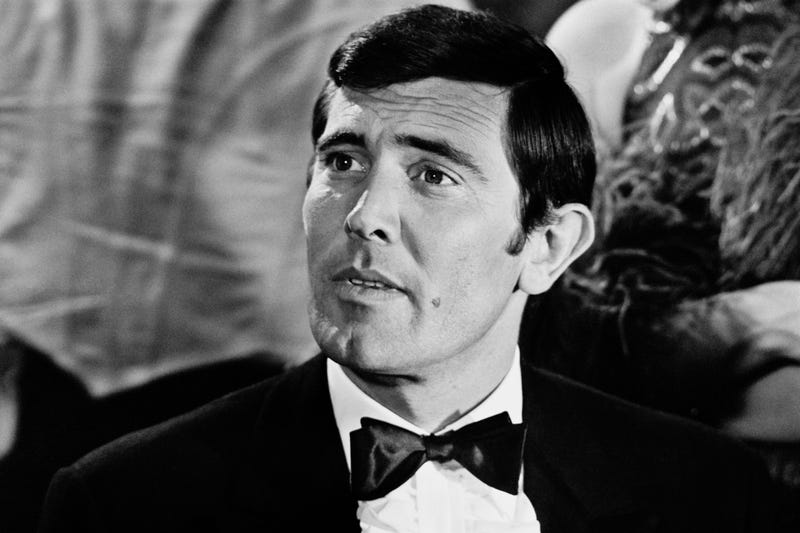 James Bond is having trouble with his cell phone.

“I seem to be having a bloody problem with this. It was acting up earlier this morning.”  Turns out 007, or actually the actor who famously played the dashing spy just once, isn’t as tech savvy as his on-screen counterpart.

George Lazenby is speaking from his home in Santa Monica, 50 years to the day since the release of his one and only James Bond film, 1969’s  “On Her Majesty's Secret Service.” Once considered the forgotten Bond film, the movie is now viewed as one of the strongest entries in the franchise. Lazenby’s performance has also been viewed more favorably over time, considered by many to be understated and underrated.

Now 80, Lazenby is in good spirits. Not only his film being screened around the world for its golden anniversary, the actor is returning to MI6 in a new audio drama, “Passport to Oblivion,” where he plays a spy, albeit a reluctant one.

So why return to the world of espionage after all these years?

“I’d never spoke before a camera in my life before that film, before testing for Bond” he says.

How Lazenby got the role of the world’s most famous spy is Hollywood lore. He bluffed his way into an audition unannounced. He had no agent, and a fake resume. That impressed the film’s director, Peter Hunt, so much, he insisted that the film’s producers give him a screen test.

He copied his look from Sean Connery's original version of Bond, even getting his hair cut by Connery’s barber, and buying a second hand suit Connery never picked up from his tailor.

“It’s my determination and my arrogance that got me the job," Lazenby said.

A former car salesman turned model from Gouldburn, Australia, was about to step into a role that only a handful of others have played.

“They sent me to voice training because I had an Australian accent, and taught me how to walk. I used to swagger when I walked, and you can’t do that [as James Bond]," Lazenby said. "They changed how I walked, how I talked, and how to be a tough killer, as James Bond is.”

Shooting the film took the better part of the year.  Lazenby admits the work was harder than he expected, and there was a lot of pressure to follow in the footsteps of Connery.

Just 29 years old at the time he was hired to play 007, Lazenby grew bored by the slow pace it took to film the movie.  So before filming had even finished, and after getting some bad advice from Irish businessman Ronan O’Rahilly, Lazenby decided one Bond was enough.

Diana Rigg, who played Bond’s wife, has gone on record saying Lazenby’s acting was fine, but didn’t understand why he decided to turn his back on the role.

So did the job offers.

“I couldn’t get a film, I couldn’t get a part. Everybody was afraid I was under contract to the Bond people and that they wouldn’t be able to release their film. It took a couple of years before I was able to get a part, and that was in Italy. So I got some money for that, and I went and bought a boat, even though I didn’t know how to sail because I was running out of money and needed a roof over my head. That tells you how crazy I was," Lazenby says.

Eventually, he was able to pick up small roles, but a reputation for being difficult followed Lazenby from England across the Atlantic to America, where he tried to get auditions.

These days Lazenby is busy raising his children he had with his ex-wife, former tennis pro Pam Shriver. He’d like to go back to his native Australia, but is rooted in Southern California.

“This is where we know everyone, and the kids have their friends," says Lazenby. "I want to be close to them, and be a part of their lives, so it’s the choice I’ve made.”

Lazenby’s also become a lot more comfortable with the choices he’s made since walking away from the role of 007 50 years ago. “”If I’m disappointed in myself today, I’ll fix that tomorrow. I won’t just stay in that same rut. I don’t have a problem with the way my life is now. I could get upset about things, but what’s the point? You’ve got to live your own life and help anyone you can along the way. “

Lazenby says he'll continue to look for roles and believes he's “a better actor than I’m given credit for,” and hopes to record more audio adventures if “Passport To Oblivion” proves to be successful.

“There’s a lot to my life when I reflect back on it, that I’ve had a lot luck” he says. “Something guided me in life that put me in the right place at the right time.”