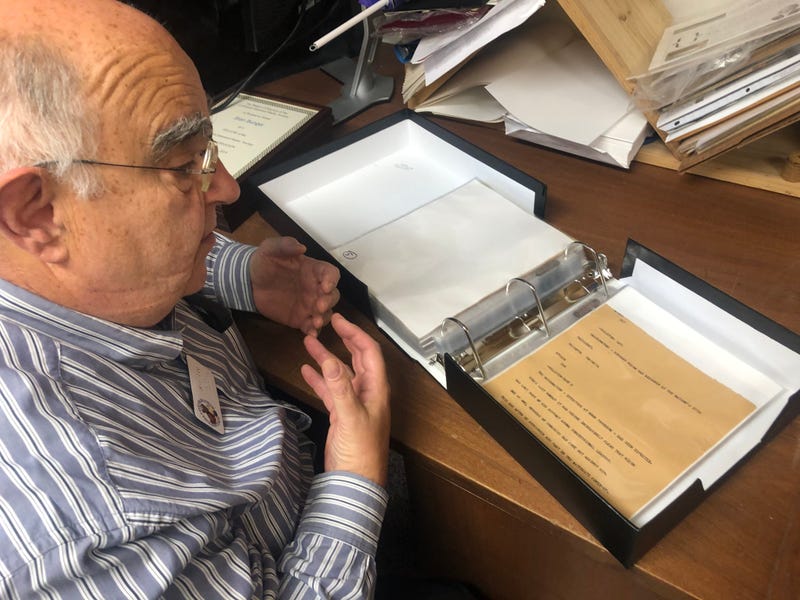 Original wire copy that crossed on the teletype machines on the day President John F. Kennedy was killed by an assassin's bullet in 1963 is being preserved and archived in Alameda.

On Nov. 22, 1963 KCBS Radio was carrying the Arthur Godfrey show on tape delay when the bulletins from the Associated Press and United Press International spit urgently from a teletype machine at the station.

“Anybody who was conscious in those days will remember that as much as anybody would remember September 11th," said Bart Lee of the California Historical Radio Society, which has a collection of materials from the broadcast.
View this post on Instagram

A group of radio enthusiasts in Alameda are preserving records from JFK’s assassination 57 years ago. Original documents from KCBS’s broadcast about the killing of President John F. Kennedy on Nov. 22, 1963 have become part of the collection at the California Historical Radio Society in Alameda. They include printouts from a teletype machine announcing the attack. Bart Lee, a retired attorney and “wireless” historian talked to KCBS Radio’s @margsha about the group’s work, including plans to display the files. Hear the full story, including portions of the original broadcast about the shooting of JFK, on KCBSRadio.com.

The person receiving the initial bulletin from Dallas at KCBS ripped the paper unevenly off the machine. This is one of the documents collected by the radio society.

After reading the initial wire copy about the shooting of Kennedy, KCBS turned to CBS Radio news in New York for wall-to-wall coverage. It culminated with the announcement that the president had died that day.

The paper wires that came into KCBS have been kept in a box for years by now deceased anchorman Ken Ackerman who passed on the faded journalistic mementos to anchor Stan Bunger.

“It’s all manufactured with, in those days, an acid process/ So what happens is the acid continues to degenerate the paper," said Lee. "That’s why it's changed color. That’s why it gets to flaky like this.”

So,  the California Historical Radio Society — nicknamed Radio Central — has put together the AP and UPI reports. They’ve been transcribed and scanned. Some copy has been put in acid-free archival sleeves. Reams are being wrapped in special paper.

“This is really good stuff so we try to protect them anyway we can," said Lee.

“It’s been an evolution and as we live in this totally electronic world with screens and many of us tend to forget that it was in a sense done the hard way," said Lee.

Plans are in the works to display the wire copy at the society.