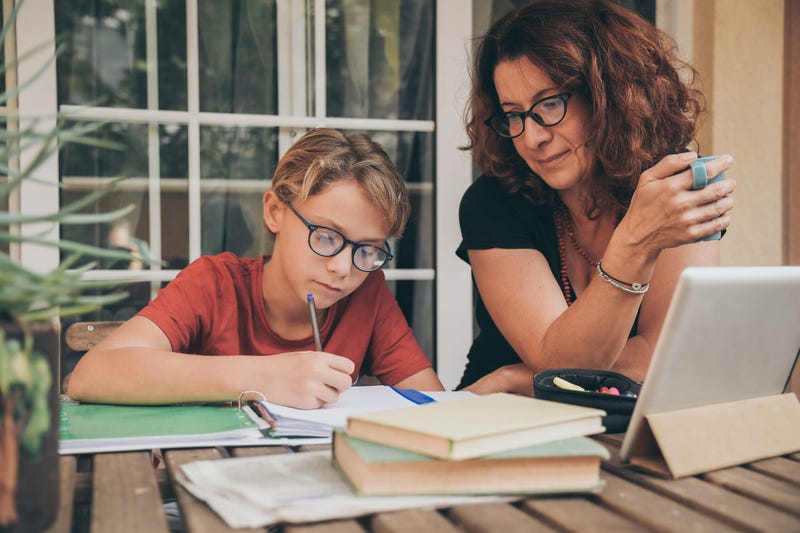 Photo credit Getty Images
By Holly Quan, KCBS All News 106.9FM and 740AM

With school starting for some public school districts in less than two weeks, thousands of Bay Area families are scouring message boards looking to form 'pods:' clusters of similarly aged kids who can learn together from a supplemental tutor hired by the parents.
In part of one of a three-part series, we take a look at the lengths parents are going to ensure their kids don't fall behind.

She's been spending the summer taking her clients’ kids on hikes in the Oakland Hills to learn about volcanic rock, dissecting squid and making something called elephant toothpaste out of yeast and hydrogen peroxide. As a former public school teacher, she feels badly for districts that had to cobble together the end of last school year with online lessons.

But now that the fall term is starting off the same way, she is not surprised her phone keeps ringing with parents concerned their children are missing out.

"I’m coming over for a couple hours and doing science experiments and stuff like that, STEAM (science, technology, engineering, arts and math) activities. They want something - they want to plan their curriculum, something really rich," she said.

That's what Geri Landman wants for her incoming first grader.

Both she and her husband are busy doctors and have no idea what will happen when classes start in Oakland on August 10.

"Whether that’s an hour of Zoom class a day and then some assignments assigned, or more or less, we’re not sure at all yet. We’ve had very little indication from the school district what school will actually look like right now," said Landman. "And so that’s one of the reasons we really wanted to hire someone with some educational experience too, who could do a little bit of independent lesson planning."

So they connected with six other families to hire a tutor; posting on alumni message boards, Teach for America boards, Nextdoor and Craigslist.

"Today and this weekend were the first times I’m feeling a little bit settled about, I think school’s going to be good."

But school district officials worry that as wealthy parents form pods, the achievement gap will widen. Some parents have received an email cautioning them about the potential exclusivity of creating pods, and there is a push to make sure that low-income families do not get left behind.