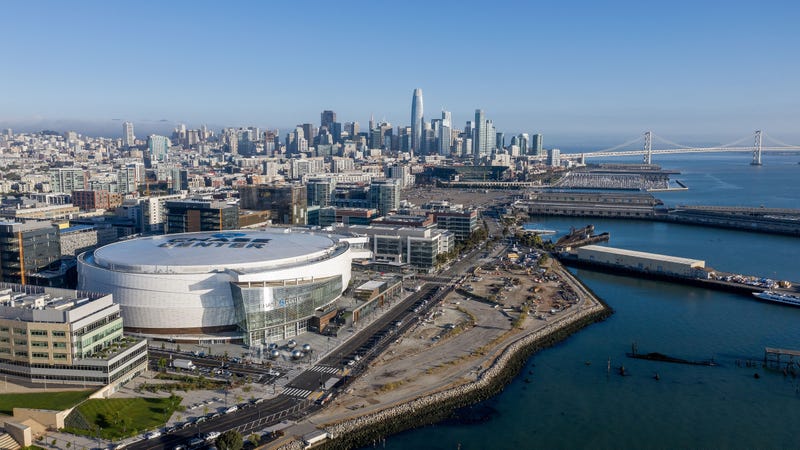 Photo credit Chase Center/GSW
By Doug Sovern, KCBS All News 106.9FM and 740AM

SAN FRANCISCO — The Warriors' new arena is up and running, and already hosting events. And with only 1,000 parking spots at a stadium that seats 18,000, the team is calling Chase Center a “transit first venue” and urging everyone to get there by public transportation.

But while the arena is ready to welcome fans, public transit may take a little longer to catch up.

The Central Subway project, which would connect the nearby Muni T Third line to downtown San Francisco will not open in time for the first events at Chase Center. There will be ferry service from Alameda and Oakland to Pier 48 near the arena, but trips have only been confirmed for Warriors games and not the arena’s other events.

A recent KCBS Radio test found a long 58-minute commute from Oakland to the Chase Center on public transportation, thanks in large part to a 39-minute Muni ride on the T Third from Embarcadero.

San Francisco Supervisor Aaron Peskin, also along for the ride on Muni, described the trip, which is just over two miles, as “a little slow.”

San Francisco Municipal Transportation Agency officials admit the slow ride to what will surely be a busy attraction is a problem.

During a regular meeting of the SFMTA Board on Tuesday, member Gwyneth Borden described a recent trip to the arena as “very challenging.”

“I just hope we can work through some of the kinks getting to and from there. It took me over an hour to get there and I had to hop into a taxi to get [to the meeting> because I waited 20 minutes and there was no KT,” said Borden. “I just want members of the public to know that people like me are trying it out to make sure it works. It’s obviously critical because we will have lots of people going there.”

A recently renovated Muni platform near the Chase Center will be able to load four trains at once, which officials hope will ease the flow of people to and from the arena.

One silver lining is that tickets to the Chase Center will double as passes on Muni.

“We won’t get it all right coming out of the gate,” said Warriors President Rick Welts. “It’s going to take us a while to make the adjustments we need to make, but we’ll get there.”