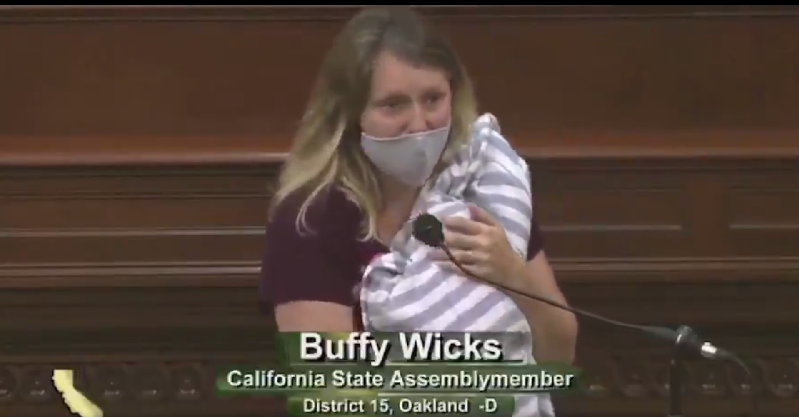 It may have been a first in the history of the California legislature. Assemblymember Buffy Wicks, a Democrat who represents parts of the East Bay, cast her vote in support of a housing measure while soothing her newborn daughter late Monday night.

The Assembly was voting on a housing bill that would have allowed for duplexes to be built in single family housing lots on the last day of the legislative session.

Wicks, who gave birth in late July, had requested to vote by proxy under a special voting procedure for legislators who are at high risk for serious cases of COVID-19. But after she was denied by Assembly Speaker Anthony Rendon, as maternity leave is not considered a high risk category, she made the drive to Sacramento with her newborn daughter in order to vote in person.

"Colleagues, it’s good to see you all. I was actually in the middle of feeding my daughter when the bill came up and I ran down on the floor today because I strongly believe we need to pass this bill," she said, while holding her daughter.

"We are 3.5 million homes shy of where we need to be right now, in this state," she said as her daughter began to cry. "And Elly agrees that we need it...it’s the simplest way we can have density that still adheres to neighborhood character. So please, please, please pass this bill, and I’m going to go finish feeding my daughter."

Absolutely devastated about #SB1120. Our housing crisis requires us to act, and tonight we failed to do that.But I promise you this: I will *always* show up for housing — no matter what. pic.twitter.com/I4n6X07CNp

In the State Senate chambers, Republicans voted remotely Monday after one of their colleagues tested positive for the virus.

The decision to deny Wicks a proxy vote drew sharp rebukes from her fellow legislators.

Speaker Rendon’s office initially defended the decision as a way to protect the legislative process, but Rendon has since apologized.

"My intention was never to be inconsiderate toward her, her role as a legislator, or her role as a mother," he said. "Inclusivity and electing more women into politics are core elements of our Democratic values. Nevertheless, I failed to make sure our process took into account the unique needs of our Members. The Assembly needs to do better. I commit to doing better."