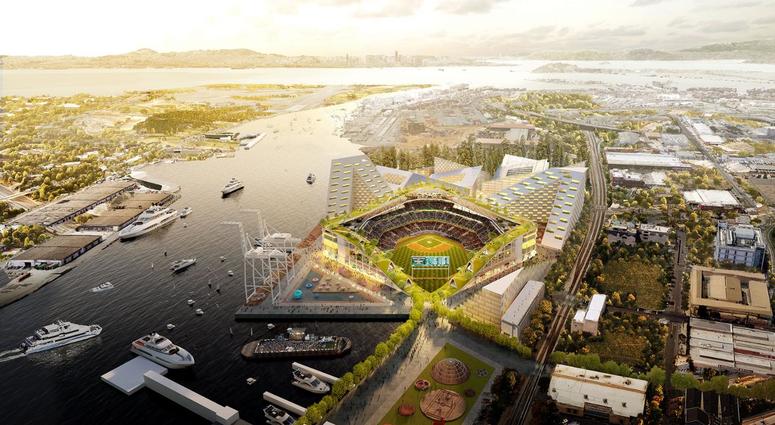 Photo credit Oakland As
By Holly Quan, KCBS All News 106.9FM and 740AM

PORT OF OAKLAND (KCBS Radio) - Shippers, truckers and Port of Oakland workers are worried that the Oakland A's plans to build a ballpark at Howard Terminal near Jack London Square could sink their industry.

They're concerned that the massive construction project and crowds attending ball games will mess up shipping and loading schedules and clog streets around the port.

Bar pilots are uneasy about bright stadium lights potentially blinding them as they maneuver around the estuary. Add in the pleasure boats and paddlers in kayaks hoping to create an Athletics equivalent of  McCovey Cove, and it could become dangerously crowded just off the Oakland waterfront.

Shipping industry officials will bring their concerns to a meeting of the Port Commission as it negotiates a property deal with the team, according to KCBS RAdio and Chronicle Insider Phil Matier's article in the San Francisco Chronicle.

The A'ss say the project will bring 5,000 jobs to the area and team officials have promised to add new lighting and adjust the design to minimize visual hazards that could hamper pilots. Their proposal calls for an expansive development of the site near Jack London Square that would include housing, shopping, offices, open space and a gondola that connects to downtown Oakland.

A woman who works at Howard Terminal and gave her name as "Gail" to KCBS Radio said the induustrial waterfront is already a tough place to reach without the added crowds a baseball stadium would attract.

"The water is always calming, it's beautiful, you can see San Francisco, but the logistics of, what I see when I leave and come to work - it's the traffic," she said. "I just don't know they're going to do it. It's just not feasible. My drawback is you have the train tracks. How are cars and people going to come to the game if there's a train coming?"