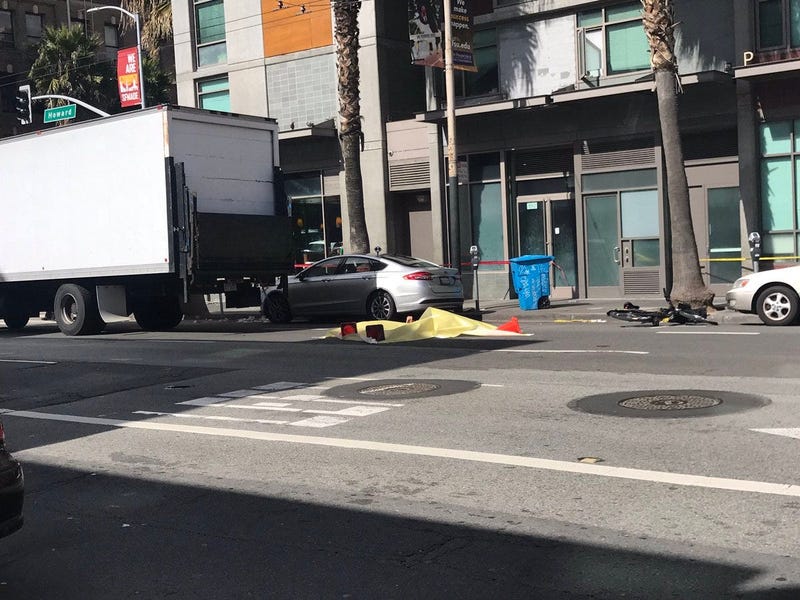 Photo credit Doug Sovern/ KCBS Radio
By KCBS All News 106.9FM and 740AM

San Francisco transportation officials are extending a section of protected bike lane on Howard Street after a bicyclist was killed last week in a collision with a truck.

SFMTA officials said that they will “immediately” remove parking on the north side of Howard Street between Fourth and Sixth Streets to create “more space and protection between cars and cyclist," according to the San Francisco Examiner.

On Friday, 30-year-old Berkeley resident Tess Rothstein was struck and killed by a truck driver while she was bicycling on an unprotected bike lane. She was just a few feet from the beginning of the protected portion, which has a barrier between cars and bicycles.

According to a witness account, a driver’s side door from a parked car swung open, prompting Rothstein to swerve into the street, where a truck crushed her.

The protected lane was not extended during planning after local businesses objected to the potential loss of parking. Bicycle advocates believe that it would have saved Rothstein’s life.

On 2 hours notice, a few hundred people assembled for a @PeopleProtected bike lane on Howard after today's terrible tragedy.Now it's your turn. Do better @sfmta_muni.Thank you for the immediate support @MattHaneySF @LondonBreed. pic.twitter.com/K4GCoo5abj

But KCBS Radio and Chronicle Insider Phil Matier said that the increasing number of cars on the road is coming into conflict with the variety of transit options and the city’s “Transit First” policy to get people to drive less.

“You name it, we’ve got it out there—it’s crowded. The only thing that hasn’t changed is the width of the streets,” he said.

Matier added that the potential loss of parking could drive out small businesses, although a recent study shows that closing city streets to cars can boost retail sales by nearly 10 percent

Officials with San Francisco Bicycle Coalition applauded the SFMTA’s response, but said they remain frustrated that real change only happens when a death occurs.

We think of ancient civilizations that practiced human sacrifice as barbaric. But that is what @sfmta_muni and @sfbos seem to require before they’ll put in protected bike lanes on a street in #SanFrancisco https://t.co/kfwHbnze7m