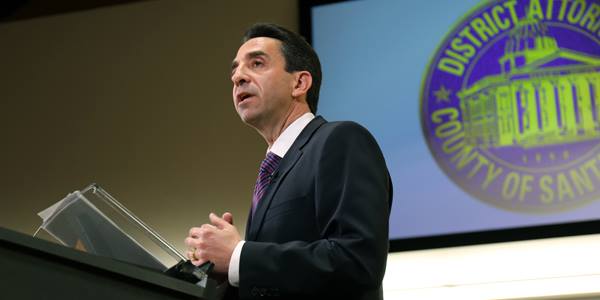 SAN JOSE — Latinos and African Americans in Santa Clara county are charged with a far higher percentage of criminal cases than their size of the population, according to a report released on Tuesday by the county district attorney's office.

Although Latinos account for 26 percent of county residents, they make up 45 percent of felony defendants while African Americans constitute two percent of the population, but 13 percent of defendants in felony cases, according to the annual "Race and Prosecutions" report.

"I don't have an answer as to why this is all happening," said assistant prosecutor James Gibbons Shapiro, "but I do think it's important for us to realize it's happening and to think about how we can reduce disproportionality in our criminal justice system."

The DA's annual self-examination of racial disparities focused on the five zip codes with the highest levels of crime. Three of those areas are in East San Jose. The figures are based on data from 2017.

The report offered no specific explanation for the apparent discrepancies by race in the county's criminal justice system.

"Racial disproportionality in our criminal justice system remains a stark and vexing problem," the report says. "While we do not have a solution for it yet, we are determined to continue to study the issue in hopes to understand it better. One day, we hope to see a system that is as humanly fair and free of bias as possible."