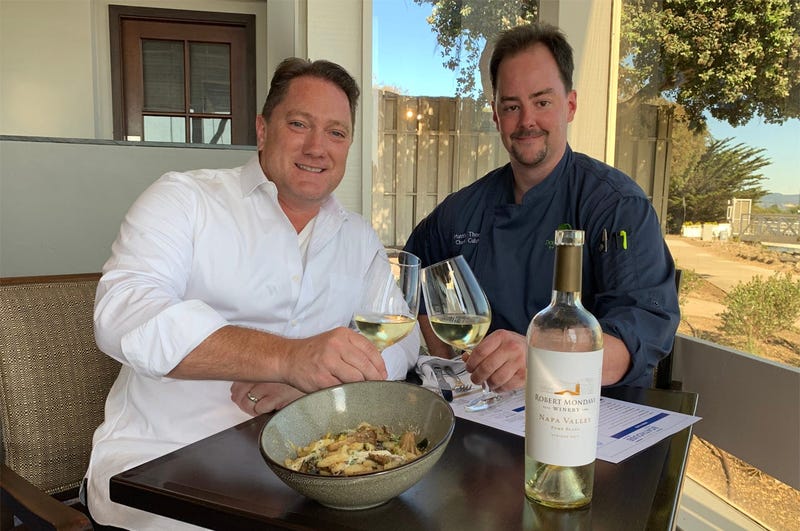 “We are serving good locally sourced food paired with good wines in a comfortable setting with a million dollar view” says Chef Thomas. Born and raised in Arkansas, Chef Thomas’ passion for food developed at an early age. Cooking with his family was an integral part of his childhood. “My grandmother on my mother’s side was Italian and some of my earliest memories in the kitchen are of my family making trofie pasta together -- singing, dancing, throwing flour, and drinking Chianti,” said Thomas.  While earning his degree in music from Arkansas Tech University, Chef Thomas continued to pursue his childhood dream of becoming a chef. In 2012, Chef Thomas moved to the Bay Area to work at the Michelin-starred Acquerello in San Francisco as a line cook. During his two-year tenure at Acquerello, Thomas honed his culinary skillsunder the direction of Chef Suzette Gresham while working closely with chefs Alex Dill, Jeremy Nelson, Mark Pensa, Tu David Phu, and Patrick Van Voorhis. Chef Thomas then went on to work at The Meritage and Limewood Restaurant & Bar at the Claremont Hotel & Spa in Berkeley. In 2019, he joined DoubleTree by Hilton Berkeley Marina and Berkeley Boathouse as chef de cuisine.  Inspired by his Italian heritage and deep Southern roots, Chef Thomas has created a well-balanced, innovative menu for the Berkeley Boathouse offering shareable small plates, flatbreads, sides, composed salads, and a selection of entrees, all of which are inspired by global influences and offer artful presentations and intriguing flavor profiles.  Chef Thomas currently resides in Berkeley. When he's not in the kitchen he enjoys the outdoors, collecting records, barbequing with family and friends, and attending A's games.  We met at the recently opened Berkeley Boathouse for our Foodie Chap chat. Chef makes their pasta fresh daily. His Cavatelli Ricotta Pasta is reason alone to venture here.  Do yourself a favor and drop in for dinner at this new waterfront spot - Berkeley Boathouse at the DoubleTree by Hilton Berkeley Marina, nestled along the San Francisco Bay but bring an overnight bag as you may be inspired to stay the night.

Notes: The more milk you add, the wetter the dough becomes, making the pasta making the process more difficult.  The dough can be kept in the refrigerator for up to two days; however, will need to rest for 30 minutes before use.It is mandatory to sing Italian songs while rolling as it makes the dough happier.

Variations of flavored pasta:For a flavored pasta add ¼ cup tomato or porcini powder, ½ cup spinach puree, red beet juice or puree, or a can of chipotle chili peppers passed through a chinois. If adding powders, the dough will be dryer so the additional milk will be needed. If using a puree, additional flour will be needed. Chef Matthew’s favorite take on this pasta is a smoked Ricotta cheese variation where he smokes Ricotta cheese in a smoker until its golden brown then incorporates the smoked cheese into the dough.

For the Mushroom Conserva

Directions: Combine thyme, garlic, oils and bay leaf in a large pot and heat to 170 degrees on the stovetop. Add mushrooms and bring the temperature back up to 170 degrees. Cook for approximately five to 10 minutes. Remove from heat, stir in Sherry vinegar and let cool to room temp.

For the Pickled Shallot

Directions:Set shallots or red onion aside in a separate mixing bowl. Combine all remaining ingredients in a small saucepan and bring to a boil. Remove from heat and pour over shallots. Let cool to room temperature.

For the Housemade Ricotta Cavatelli with Kale and Conserved Mushrooms

Directions: In a medium saucepan heat the mushroom converva in a little bit of its oil. Add the chopped kale, garlic, red chili flake, and sauté until wilted. Add the vegetable stock, butter, minced thyme, and pickled shallot to the sauté pan simmer until the sauce is reduced. While the sauce is reducing bring a large pot of salted water to a boil. Add the fresh cavatelli and cook for approx. 4 minutes. Strain the pasta and transfer it to the sauté pan. Toss until emulsified and pasta is coated. Taste salt level; adjust if needed.Dish onto two serving plates and top with Stracciatella cheese, chives, parmesan, fennel pollen, and lemon zest.