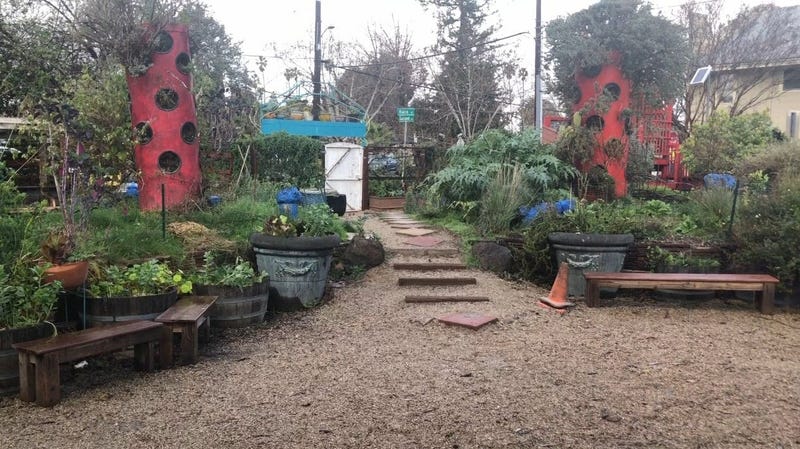 Small businesses, nonprofits and renters in San Jose are anxious about the possibility of rising rents and displacement brought on by Google’s massive development project in the city’s downtown.

One early victim could be a beloved community garden that has been a part of the area for nearly two decades. The future of the Middlebrook Gardens in San Jose’s Hanchet Park neighorbood is now in doubt after property owner Fred Soltanzad filed plans with the city to build a retail complex on the lot. Property values in the area have skyrocketed because Google’s planned development is just a few blocks away.

When Alrie Middlebrook moved in 18 years ago, the space was being used as a parking lot. Now in addition to offering landscape design and a nursery, it is also a teaching garden with an emphasis on sustainable gardens. Middlebrook says about 8,000 students come through the garden each year to learn “how to take care of the land and how to grow food that doesn’t disrupt nature”.

For Emeline Delong, the garden is a way to connect with nature, which has become harder and harder to find in San Jose “because we live right next to all these freeways, all these big buildings and this makes you feel like you’re actually connected to the Earth.” Without the garden, she says, “I probably wouldn’t have bought a house around here.”

But the outpouring of community support doesn’t seem to be having an impact on Soltanzad, who has threatened to have Middlebrook evicted if residents complain about the project or if KCBS Radio published our story. But that hasn’t fazed Middlebrook as, “he’s been threatening me for a long time”.

It hasn’t fazed the community either.  A community rally will be held on Sunday from 12pm-3pm on the property, 76 Race St.