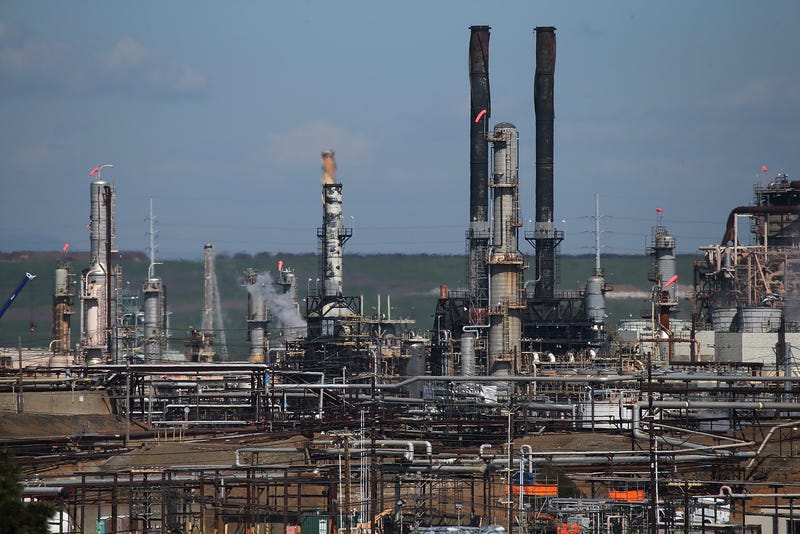 The Bay Area Air Quality Management District's Board of Directors voted on Wednesday to require four refineries in the region to reduce particulate matter emissions from the production of crude oil into fuels. The board said the companies can comply with amended rules by installing wet gas scrubbers to control emissions.

Chevron’s Richmond refinery and PBF Energy's Martinez refinery will have to comply with the new emissions standard within five years. The Valero Benicia refinery already has a wet scrubber, and the inactive Marathon Martinez could install one if operations resumed.

"Today’s vote by the Air District Board of Directors is a victory for every Bay Area resident, particularly those living in communities surrounding refineries as well as the refinery workers regularly exposed to harmful particulate pollution," Santa Clara County Supervisor Cindy Chavez, chair of the Board of Directors, said in a statement Wednesday.

"We are committed to protecting the health of both refinery workers and neighbors and look forward to implementing this landmark protective rule with Chevron and PBF."

Based on 2019 financial data, Air District staff determined the cost of compliance would be 13.7% of Chevron Richmond’s net income and 22.3% of net income at PBF Energy Martinez. In order to reduce cost impacts below 10%, the companies could reduce the equivalent of 62 jobs at the former plant and 128 at the latter in labor costs.

District staff also identified a $0.02 per gallon increase in the cost of gasoline as a potential adjustment for both Chevron and PBF Energy.

A Chevron representative emailed the Air District on Tuesday, claiming in a public comment that "stakeholders' voices" had been "drowned out by groups providing misinformation and pushing for action" that was "inconsistent" with other air districts in the state and the Bay Area district’s "own practices." In a release Wednesday, PBF Energy signaled it would not install a wet gas scrubber but instead will rely on "previously planned projects."