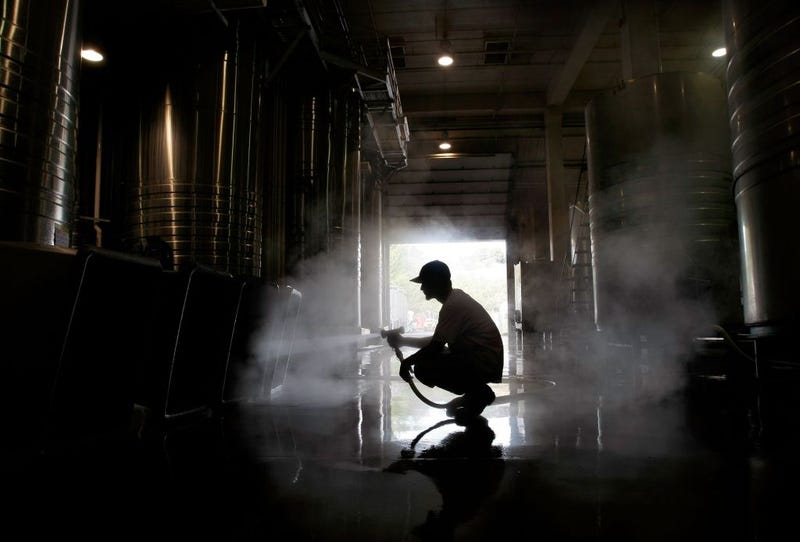 A worker uses a hose to clean out plastic bins in the fermenting tank room on October 9, 2007 in Napa, California. Photo credit Justin Sullivan/Getty Images
By Eric Brooks, KCBS Radio

Cal/OSHA has launched an investigation following the untimely death of a worker at a renowned Healdsburg winery.

Salvador Plaza-Centeno of Windsor died on the job Tuesday at Dry Creek Vineyard at 3770 Lambert Bridge Rd., the Sonoma County Sheriff's Office confirmed to KCBS Radio. The incident reportedly happened at about 2 p.m.

The cause of Plaza-Centeno's death remains unclear, nor was it immediately known what he was doing at the time.

A spokesperson for the California Department of Industrial Relations told The Press Democrat that "Plaza-Centeno was reportedly found in a fermentation tank at the winery," a detail denied by Sara Rathbun, Dry Creek Vineyard's director of marketing and communications.

"Salvador was hunched over a tank performing a routine procedure when co-workers noticed he was having a medical emergency," Rathbun told KCBS Radio. "Based on our understanding, we strongly believe this was not work related. It is important to know that Dry Creek Vineyard values the safety of all of its staff and has significant safety protocols in place for all of its operations."

When reached for comment late Wednesday, officials with the state's Department of