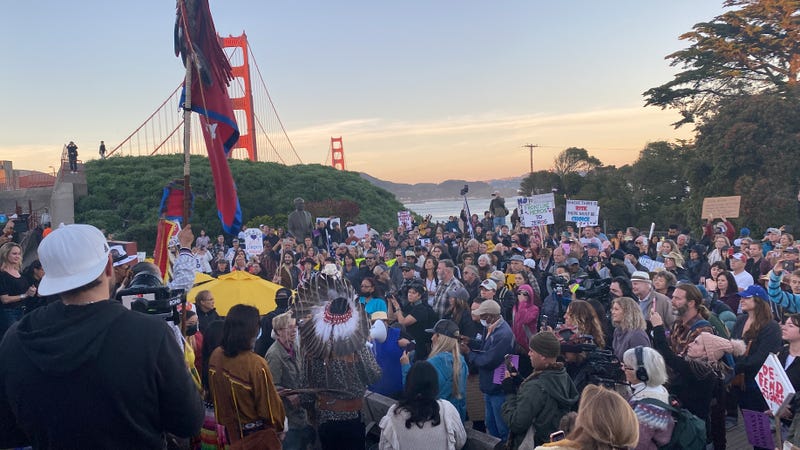 Northbound traffic on the Golden Gate Bridge in San Francisco slowed to a crawl multiple times Thursday during an unpermitted protest against government COVID-19 vaccination mandates, including after a car struck and injured five people in the evening.

A group of as many as 200 people gathered at the Golden Gate Bridge Welcome Center, beginning Thursday afternoon. Two California Highway Patrol officers and three Golden Gate Bridge District personnel were struck by a vehicle, a CHP spokesperson said in a text message to KCBS Radio.

At around 5:30 p.m., law enforcement started blocking the right lane on the bridge's northbound side, as protestors gathered near the bridge. A Golden Gate Bridge District spokesperson told KCBS Radio that demonstrators didn't have a permit, and the officers were positioned to prevent them from crossing the bridge as organizers had hoped.

Just before 6 p.m., northbound traffic was closed in all but one lane following the accident.

"From video footage, it looks like two vehicles swerved into a lane that was being blocked by California Highway Patrol as well as Golden Gate Bridge staff," bridge district spokesperson Paolo Cosulich-Schwartz told KCBS Radio's Megan Goldsby in an interview.

The two CHP officers were transported to local hospitals for evaluation after sustaining non-life-threatening injuries, according to the agency spokesperson. Cosulich-Schwartz said the bridge district workers sustained minor injuries.

A man parked his car near the demonstrators and refused to move, the California Highway Patrol told KCBS Radio. Officers then arrested the man, temporarily stopping train. Officials said it wasn't clear whether the person was associated with the protest.

Demonstrators gather at the #GoldenGateBridge welcome center to protest government vaccine mandates. Hear the story this afternoon and evening on @KCBSRadio. pic.twitter.com/c8dCS0JeQd

Thursday's protest was part of what organizers termed the "Nationwide Walkout," culminating with a Golden Gate Bridge demonstration that organizers wrote on their website would "show the government that we are UNITED and NOT DIVIDED under the name of FREEDOM."

Protest organizers touted the participation and involvement of a constellation of anti-vaccine groups and organizations. Those included Robert Kennedy Jr.'s Children's Health Defense Fund – which has been banned from YouTube for spreading vaccine misinformation – and pro-Donald Trump lawyer Lin Wood's #FightBack Foundation.

Wood was permanently banned from Twitter on Jan. 7, after encouraging efforts to overturn the presidential election that culiminated in the U.S. Capitol Riots a day before. In September, the vocal QAnon advocate directed his 800,000-plus Telegram followers to call a Chicago-area hospital to treat a COVID-infected QAnon influencer with ivermectin, a disproven COVID-19 treatment that anti-vaccine advocates tout as a miracle drug. The influencer later died in the hospital.

Protest organizers touted Black Lives Matter New York organizer Hawk Newsome as one of its speakers. Newsome is unvaccinated and has said he became suspicious of the vaccines when he heard politicians wanted to prioritize vaccinations in minority neighborhoods. He has also organized anti-vaccine protests in New York City. 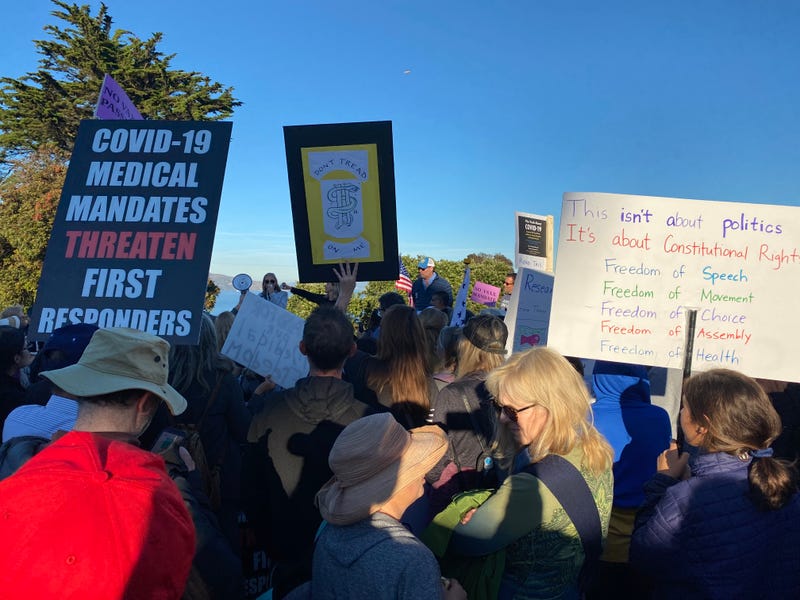 A protestor told KCBS Radio that the event was "apolitical" and a demonstration to protect constitutional rights.

"We shouldn't have any vaccine being contingent on the right to be educated, or the right to go into a grocery store, the right to see a show," Maureen Block of Marin County said. "It should be, 'my body, my choice.' "

The U.S. Supreme Court held in 1905 that government entities, including schools, can mandate vaccinations. Proof of COVID-19 vaccination is required to enter some Bay Area theaters and entertainment venues, but none of the Bay Area counties require proof of vaccination to enter grocery stores.

The Bay Area has one of the country's highest COVID-19 vaccination rates, and Thursday's event didn't appear to have much reach locally, at least on social media. Most of the tweets from the event featuring either of its approved slogans came from Leigh Dundas' account.

Dundas, a Southern California attorney, is one of the events' two organizers.

Protestors peacefully rallying near the Golden Gate Bridge on Nov. 11th at the Nationwide Walkout Rally in San Fransisco.

Protest organizers said the demonstration would go from 3-6:30 p.m. on Thursday, with speakers going until 5. Organizers encouraged big rig truck drivers to "stand against vaccine mandates by driving" to the Golden Gate Bridge. 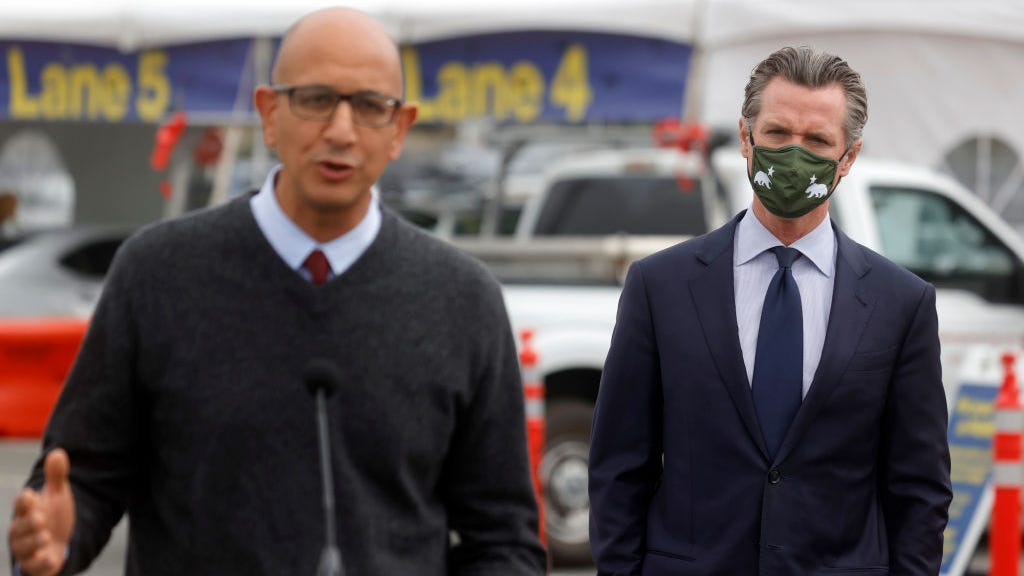