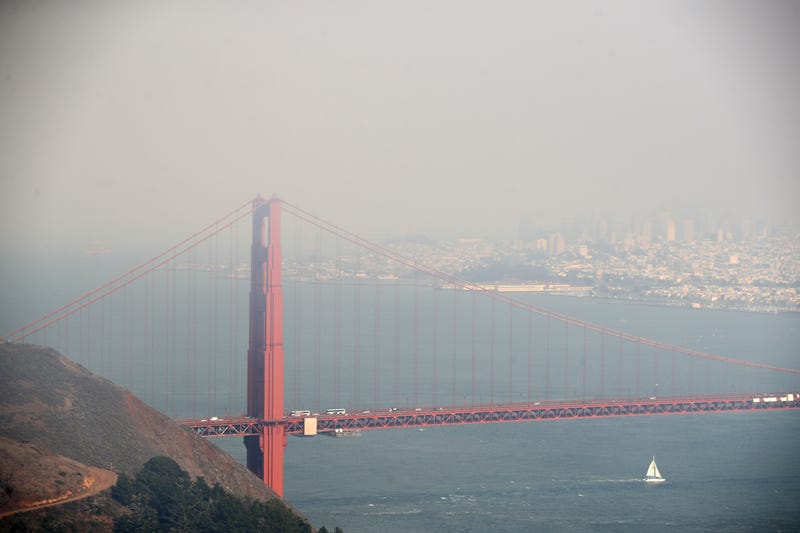 The Bay Area Air Quality Management District has issued a Spare the Air alert for Tuesday due to the buildup of smog in the Bay Area. Photo credit Ezra Shaw/ Getty Images
By Lucy Fasano, KCBS Radio

The Bay Area Air Quality Management District has issued a Spare the Air alert for Tuesday due to the buildup of smog in the Bay Area.

With the accumulation of wildfire smoke, rising temperatures in the Bay Area and vehicle exhaust, unhealthy air quality for sensitive groups is expected in the East Bay and Santa Clara Valley.

Tomorrow, 9/21, Spare the Air Alert for Ozone! Bay Area air quality is expected to be Unhealthy for Sensitive Groups in the Eastern Zone and Santa Clara Valley, Moderate in all other regions.

Smoke from wildfires burning throughout California is expected to lead to smoky and hazy skies in the Bay Area.

Inland East Bay Cities are expected to measure over 100 on the Air Quality Index, which is color-coded orange as unhealthy for sensitive groups.
The same is expected of San Jose and other South Bay cities. Most coastal cities are forecast to measure around 60, which is colored yellow and considered moderate air quality.

A Spare the Air alert is called when the ozone pollution is forecast to be unhealthy in any part of the Bay Area. Unhealthy levels of ozone pollution or smog can cause throat irritation, congestion, chest pain, trigger asthma and inflame lungs, the Air District said.

Officials advised everyone to limit outdoor exercise to the early morning hours, and residents who smell smoke should stay inside as temperatures allow. Limiting dri