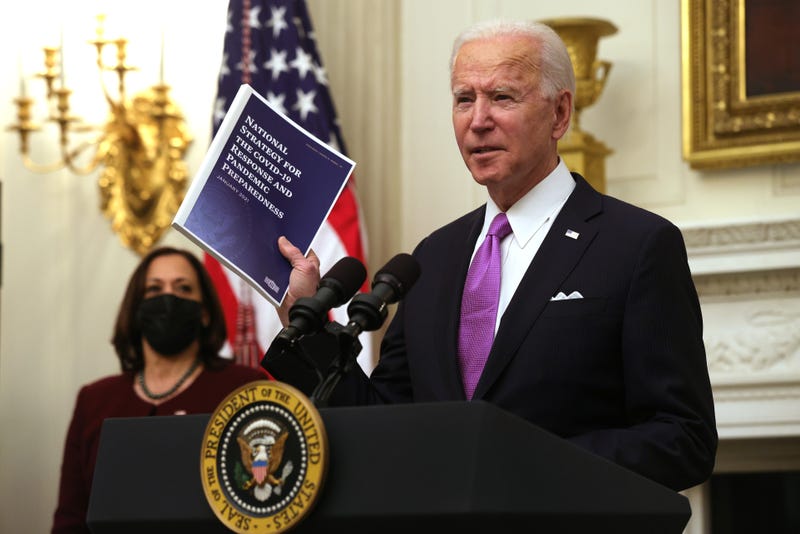 President Joe Biden said Tuesday the U.S. will have enough doses to safely vaccinate every American for COVID-19 by the end of May, two months earlier than he predicted just weeks ago.

The president had originally targeted the end of July.

.@POTUS has moved UP the date for when he thinks there will be enough vaccines for every American, revising it from the end of July to May.

Biden's projection comes as both Pfizer and Moderna are ramping up production on their two-dose vaccines and days after the U.S. Food and Drug Administration granted emergency use authorization for the single-shot Johnson & Johnson vaccine, a move that's expected to bring an additional 20 million vaccine doses into the market by the end of the month.

The federal government will increase supply of the states' Moderna and Pfizer vaccines to 15.2 million doses per week, up from 14.5 million previously. States are expected to get 2.8 million doses of the Johnson & Johnson shot this week.

"Our administration will never take this public health threat lightly" Biden said as part of a COVID-19 update from the White House. "Though we celebrate the news of the third vaccine, I urge all Americans: Please keep washing your hands. Wear a mask (and) keep wearing them. Get vaccinated when it's your turn. Now's not the time to let up."

At least two states, including Texas, signaled the end of their mask mandates.