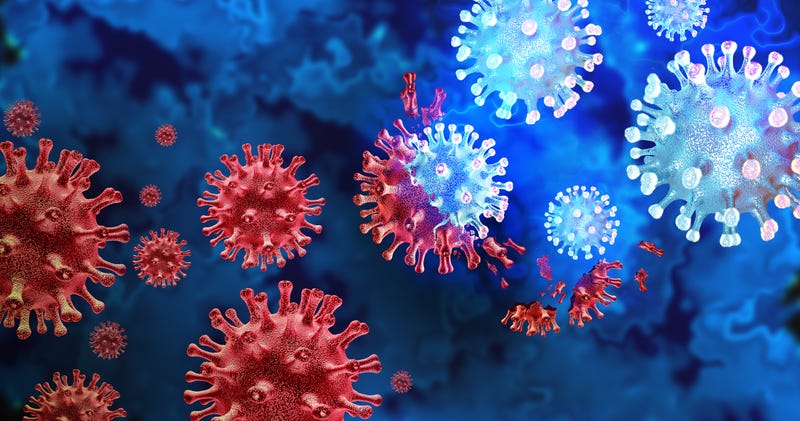 SAN FRANCISCO (KCBS RADIO) – Long COVID-19 symptoms may be caused by an overreaction of people's immune systems, according to a recently published paper by Cedars-Sinai researchers.

According to the paper, the COVID-19 virus reportedly latches on to cells with spikes on their surface, which are "comprised of molecular motifs, stretches of amino acids that make a protein," said the paper. These spikes have "'superantigen' characteristics, meaning that the immune system can overreact to their presence."

Along with that, the spikes could also have "neurotoxic motifs" which can cause damage to brain cells, creating the brain fog that so many people with long COVID-19 seem to experience.

"We're trying to understand what causes this," Dr. Moshe Arditi, director of pediatric infectious diseases at Cedars-Sinai and senior author of the paper told KCBS Radio's Melissa Culross and Bret Burkhart on Monday's "Ask an Expert."

"We know it's triggered by the infection but the downstream effect – what is causing these – is still unclear," he said. "Therefore, there’s a tremendous amount of research going on in this."

The hypothesis put forth by the paper is based on the team's study of other research put out on the subject since the beginning of the pandemic.

"We're trying to understand slowly, clues that may be causing this," he said.

One such hypothesis is based on the persistence of the virus, remnants of it remaining deep in people’s tissue, in certain organs like the gut, said Arditi.

The persistence of the RNA, or some of the proteins, or the antigens the virus produces, or both, he said, could trigger chronic inflammation in some people.

The specific spike protein cited in Arditi's paper could persist in these areas, eventually "leak to the blood, and continuously expose the patients to these antigens," he said.

"Continous exposure over a long time to these antigens could lead to some form of autoimmunity, which is where the immune system turns against you," said Arditi.

That's one part of the hypothesis in the paper. The second part is that the virus contains certain toxins that can damage the brain cells.

This could play a role in the neurological symptoms, particularly the brain fog, that many with long COVID-19 report having.

It's still unclear why some people wind up with these symptoms and others do not.

One theory is that there could be a genetic link. Another is that some people are just not able to completely get the virus out of their system.

And it's essential to get a better understanding of what causes these symptoms in order to treat them.

"Once we understand the mechanisms, and this just takes us one small step further – to have additional hypotheses – then we can start to really look in patients and samples to see if this is really happening, and if it is, we can have new treatments for them," he said.