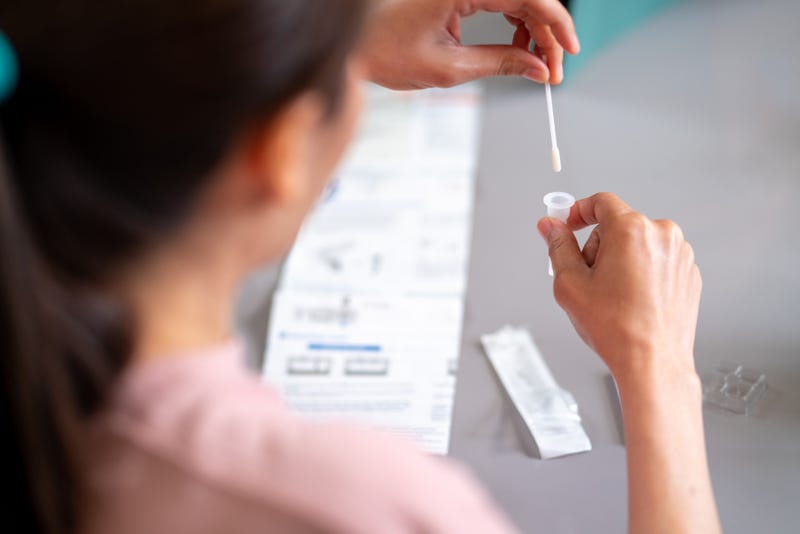 COVID-19 testing is no longer recommended if someone is not feeling symptoms or hasn't had a risk of exposure. Photo credit Getty Images
By Natalia Gurevich, KCBS Radio

(SAN FRANCISCO KCBS RADIO) – As the pandemic becomes fully entrenched in a new phase where people live without mandates and increasing numbers of infected people aren't exhibiting symptoms, it's unclear just how much testing should still be done.

Right now, if people test positive the CDC still recommends isolating for at least five days. After those five days, people can test themselves again, and if the result comes back negative, they can leave isolation.

However, it's more likely that the result will come back positive, and up to five more days might be needed to isolate and test.

"We've found with omicron about eight days is the average time for some to be positive," Dr. Peter Chin-Hong, Professor of Medicine and infectious disease expert at UCSF said on KCBS Radio's "Ask an Expert" on Monday with Melissa Culross.

Those who do test negative on day five could continue wearing a mask until day 10 just to be on the safe side of things. "The rapid test is a good measure of infectivity," he said. "So if you're negative, you're negative."

It's not recommended to keep testing after day 10. "Because we don't really know what that means," said Chin-Hong. Some people may continue to test positive for a long time.

The guidelines on all these testing timeframes can be confusing for some people, particularly that chunk of time in between day five and day eight.

"I think there is less specific guidance about what if you continue to be positive after day 10," he said.

Typically after day 10 people are good to go, but those who are in a vulnerable state or in an environment with a vulnerable person should exercise a bit more caution. As the latest wave continues in its downturn, people shouldn't be getting tested just for the sake of it, said Chin-Hong, as that's how false positives arise.

"Unless you have symptoms or are in contact with an exposure, one shouldn't be just testing randomly," he said.

The CDC is expected to come out with a new guidance soon that will likely deemphasize asymptomatic testing, he said.

But for big events like weddings, family reunions, etc., it's still reasonable to pretest, just to be on the safe side.