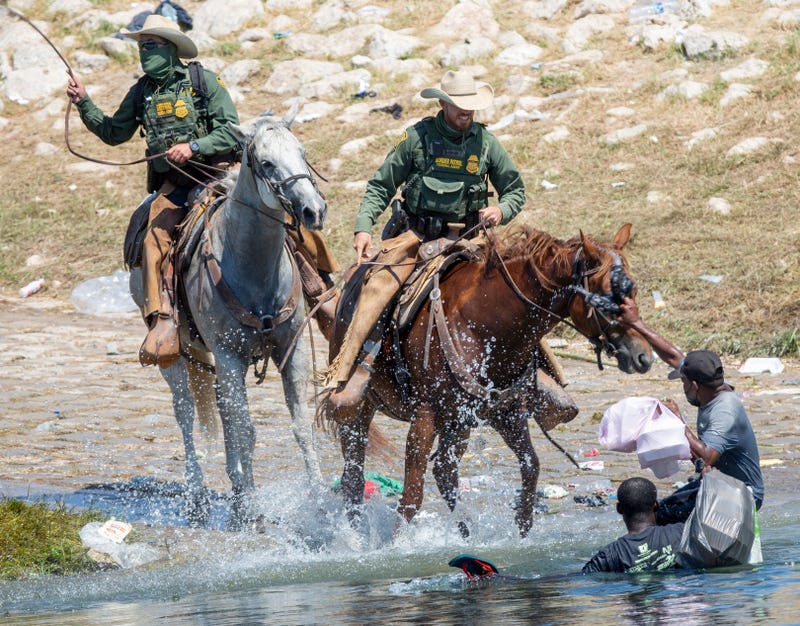 U.S. Border Patrol agents deter Haitians from returning to the U.S. on the bank of the Rio Grande after migrants crossed back to Mexico for food and water. Photo credit Omar Ornelas/El Paso Times via Imagn Content Services, LLC
By Marcus White, KCBS Radio

"What I saw depicted about those individuals on horseback, treating human beings the way they were, was horrible," Harris told reporters on Tuesday morning. "And I fully support what is happening right now, which is a thorough investigation into exactly what is going on there. But human beings should never be treated that way, and I was deeply troubled about it and I'll also be talking with (Homeland Security Secretary Alejandro) Mayorkas today about it."

Thousands of Haitian migrants are living under a bridge in Del Rio, Texas, seeking asylum from a country that has experienced a 7.2-magnitude earthquake and its prime minister's assassination since the start of July. The Biden administration on Sunday began deporting migrants back to Haiti, and officials have continued to insist Haitians who arrived after July 29 will not be granted temporary protected status amid turmoil in the country.

Soon after the deportations began, footage circulated of Border Patrol intimidating migrants and, in some cases, using their horses to push people back into Mexico. One agent, recorded by Al-Jazeera English, shouted a xenophobic taunt to a group of migrants emerging from the Rio Grande.

The agent shouted: "This is why your country's s--t, because you use your women for this!"

Many Democratic legislators criticized the agents on Monday, prompting the Department of Homeland Security to tweet that night that it does "not tolerate the abuse of migrants&qu