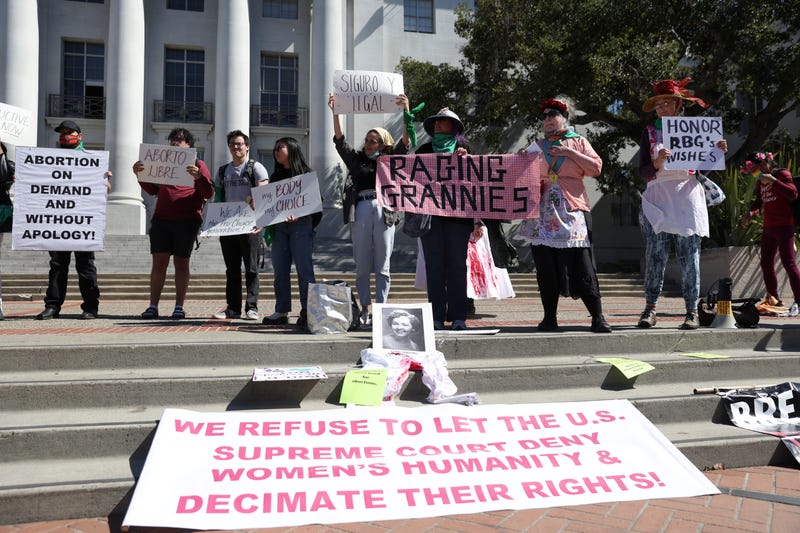 Demonstrators hold signs as they stage a protest in favor of abortion rights on the steps of Sproul Hall on the UC Berkeley campus on March 08, 2022 in Berkeley, California. Photo credit Justin Sullivan/Getty Images
By Marcus White, KCBS Radio

Seventy-one percent of registered California voters told the Institute of Governmental Studies earlier this month that they intend to vote yes on Proposition 1, which would amend the state constitution to bar state officials from restricting the right to an abortion or access to contraceptives.

Support was strongest in the Bay Area, with 80% of respondents indicating that they will vote yes. But the measure enjoyed nearly two-thirds support in every region of the state.

At least 65% of registered voters in the North Coast and Sierras (65%), Inland Empire (66%), Central Valley (66%) and Orange County (69%) said they would support the measure, which California lawmakers introduced in June shortly after the U.S. Supreme Court overturned a pair of decisions that established and affirmed, respectively, constitutional protections for abortions.

A Pew Research poll last month found a majority of Americans support abortion rights, with 62% saying it should be legal in all or most cases. Although strongly divided along partisan lines, 57% of respondents disapproved of the Supreme Court’s decision.

While 56% of American voters told Pew Research in a poll published this week that abortion was a "very important" issue in the midterm elections, an even higher share of California voters (63%) said the same in the UC Berkeley poll. That included 64% of registered voters in the Bay Area.