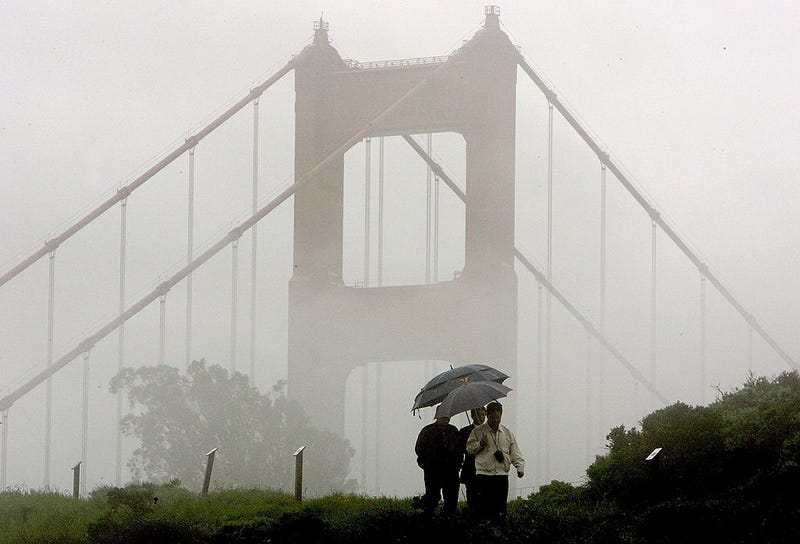 A group of men walk through the rain near the north tower of the Golden Gate Bridge April 12, 2006 in Sausalito, California. Photo credit Justin Sullivan/Getty Images
By Natalia Gurevich, KCBS Radio

October is not typically a heavy rainfall month for California, but it appears that this year meteorologists are anticipating several days of rain starting up north through the Bay Area starting next week.

The promise of rain is music to the ears of most California residents that have been grappling with the worst fire season in the state's recent memory.

It is difficult to predict the weather past seven days, but right now there is a "growing consensus in the forecast model" that moderate to heavy rain is expected to begin Oct. 20.

"There's still a lot of uncertainty, especially the details of how much rainfall, timing, where, when, but overall it is looking more promising for wet weather," said National Weather Service forecaster Roger Gass.

The rain is forecasted to begin on Oct. 20 and continue for the next week or so due to a storm passing through from the north which is likely to peter out as it moves south of the Bay Area.

The level expected could be record-breaking for this time of year, said Gass. "There's going to be the potential for record-breaking rainfall in the sense that we're talking about October, where we don't typically see significant rainfall, or at least not frequently."

It’s difficult to gauge just how many inches some places might expect "This isn't going to be a January or February record rainfall," but some areas might get as much as two inches of rain, he said.

"We'll have more details as it unfolds, but right now it’s still kind of almost like a little crystal ball," said Gass.