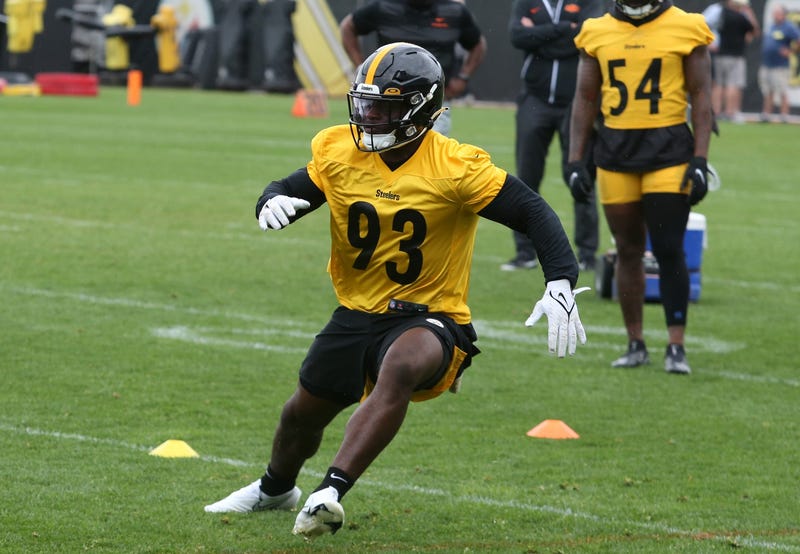 PITTSBURGH (93.7 The Fan) – It was the defensive play of the night in the Steelers preseason opener. Made by a seventh-round draft choice who was a running back last year.

A minute 17 left in a tied game Saturday, Kenny Pickett was just sacked on a fourth and one and Seattle had the ball in Steelers territory.  Looked like the Seahawks were going to spoil the first game under the new stadium name.  Steelers came with a disguised blitz on Seattle’s first play after the turnover.  Linebacker Mark Robinson came free, hunted down Seahawks quarterback Drew Lock, while making the sack knocked the ball out.  Tuzar Skipper recovered and Pickett would lead the Steelers to victory.

“I know it’s a good momentum swing for everybody involved,” Robinson said.  “Getting us out of here with a win.  Glad I could make a play to help everybody.”

“That’s my locker buddy bro,” said Steelers defensive back Arthur Maulet.  “I was so excited.  That’s a guy that works his butt off.  Obviously, he was drafted and wants to play and wants to be big time.  I just say let the game come to you.  For that to pan out for a big play at the end of the game and then for us to score a final touchdown.  I’m so happy for him.”

“They loved it,” Robinson said of the reaction as the sideline erupted.  “Those are my guys.  Any time I got a chance to go out and do good.  I know they are going to have my back 1000%.”

Even Steelers Head Coach Mike Tomlin, who usually is wary to credit any rookie, acknowledged the gravity of the play.  He said they value plays like that.

All from a guy who if the original course stayed true, you would have seen at Joe Walton Stadium carrying a football.  Robinson’s career began at Big South member Presbyterian in 2017, before Robert Morris joined the conference.  Robinson was a tailback playing 11 games as a true freshman with 332 yards and a team-leading five rushing touchdowns.  Robinson felt there was more there.

He transferred to Southeast Missouri and played in 13 games in 2018 and was the team’s second leading rusher with 364 yards and four touchdowns.  Once again Robinson felt there was more there.  It was time to go FBS, even if it meant he would walk on.

Sitting out due to the transfer rules at the time, Robinson would only get one year with the Rebels.  It wouldn’t be at running back, rather switching in the Spring of last year to a slightly undersized 5’11”, but well-muscled 235-pound linebacker.

His performance earned him a scholarship at the beginning of Fall camp and he rewarded the coaches finishing second on the team with 92 tackles, 8.5 for loss and three sacks in his only year in the SEC.  He had eight tackles at #1 Alabama, eight more against #13 Arkansas, nine at #18 Auburn, seven against #11 Texas A&M and then wrecked Tennessee.  Robinson had five tackles for loss, 12 solo tackles and 14 tackles in all against the Vols.

Now the big splash play against the Seahawks to open his NFL career.

The Georgia native still has a lot of work to do just to make this team, let alone influence a regular season game.  He said it was time quickly to move on from that game and breakdown the film.  There will be bad to correct, but the good changed the game Saturday.

Linebackers coach Brian Flores said when they made Robinson their final draft pick he was raw.  But the Steelers staff saw upside-speed, athleticism, physicality and toughness.  Flores described his college tape as ‘fun to watch’.  The veteran coach didn’t pretend it will be an easy road for the rookie.  He said there is a lot of work ahead of him and Robinson needs to continue to grow daily.

But if he does, can impact special teams and continue to show a knack for making big plays.  Soon there will be a job opening at middle linebacker.  Can he be ready in time for that opportunity?

“Just putting my best foot forward, (then) everything (will) fall in line,” Robinson said.