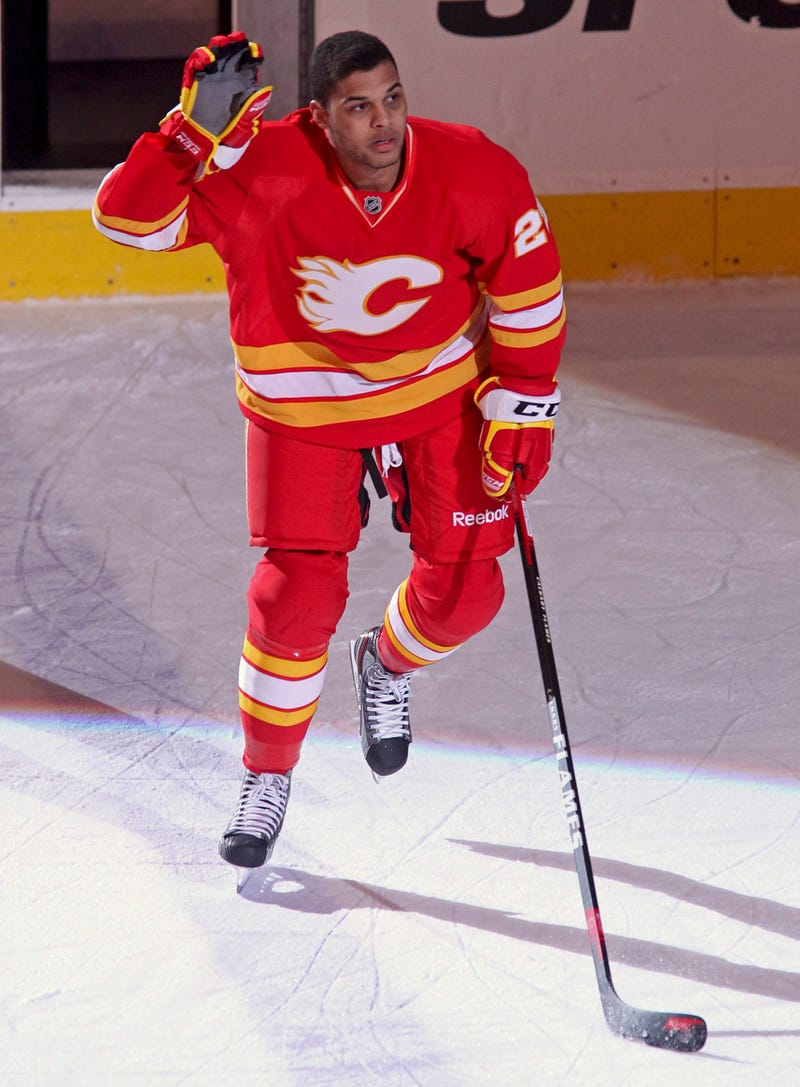 CALGARY, CANADA - APRIL 7: Akim Aliu #29 of the Calgary Flames was the first star with two goals in his second NHL game against the Anaheim Ducks during in NHL action on April 7, 2012 at the Scotiabank Saddledome in Calgary, Alberta, Canada. Photo credit Mike Ridewood/Getty Images
By The Associated Press

Glancing at the illustration of the boy with the far-off stare standing next to a bus on the cover of the graphic novel memoir (below) that will tell his story, Akim Aliu immediately remembers the pain of growing up poor and Black in Toronto.

We're excited to share that we're partnering with our friends at @Scholastic to publish professional hockey player @Dreamer_Aliu78's graphic memoir, DREAMER, on Feb. 7, 2023!

From the hours spent alone riding public transit to and from arenas across the city to the strips of duct tape holding together the garage sale-purchased hockey equipment bag slung over his shoulder, the depiction of a teenaged Aliu hits home. Aliu was born in Nigeria to mixed-race parents and then lived in Ukraine before the family moved to Canada.

“It’s a simple cover, but tells a long, deep story of a lot of sorrow, a lot of sad days, a lot of tears, a lot of uncertainty and feeling different and, to be honest, feeling left out, feeling like you’re not part of the society as it stands,” said Aliu, now 32. “It’s powerful, and it really hits me. And I hope people take the time to digest it, and learn a little bit more about my story.”

Titled “Akim Aliu Dreamer: Growing Up Black in the World of Hockey,” the graphic novel is due out in February, and is being co-released by Scholastic and former NFL quarterback Colin Kaepernick’s publishing company. The release, announced Thursday, comes on the heels of Kaepernick’s own best-selling picture book, “I Color Myself Different,” which details a similar tale of an athlete transcending their sport by speaking out on inequality.

Aimed for an audience of 8- to 12-year-olds, Aliu shares his journey of dealing with the difficulties of assimilating in Ukraine and Canada. It details the hazing and systemic racism he experienced pursuing his dream of playing pro hockey before eventually finding his voice in forcing the sport of hockey to confront its bias toward people of color.

Aliu was a journeyman minor leaguer who appeared in seven NHL career games with the Calgary Flames over two seasons before he made two life-altering social media posts in November 2019.

In allegations proven to be true, Aliu revealed then-Flames coach Bill Peters bullied and directed racist slurs at him when the two were in the minors a decade earlier. Peters resigned days later, and Aliu’s revelations led to the NHL instituting a personal conduct policy in a bid to eradicate racism in what’s traditionally been a white-dominated sport.

Aliu has since co-founded a players-backed Hockey Diversity Alliance to raise awareness and make hockey more accessible to minorities and underprivileged youth.

Aliu said he never envisioned being the subject of a graphic novel, and doesn’t consider himself being some sort of superhero. He hopes that sharing his past helps ease the feelings of hopelessness others might be experiencing.

“For the longest time, I think hockey took so much out of me because I was trying to fit into this mold,” said Aliu, who last played pro hockey in the Czech Republic in the final weeks of the 2019-20 season. “I kind of came to peace where I was just happy in my own skin.”

The book is being co-written by Greg Anderson Elysee, a Haitian-American writer and film-maker, and illustrated by Karen De la Vega, who is making her publishing debut.

Aliu’s message of speaking out against injustice is also now tied to his roots, given the war in Ukraine, and watching in horror footage of his former neighborhood devastated by shelling. With a Nigerian father and Ukrainian mother, Aliu spent much of his first nine years living in Kyiv before the family moved to Canada.

He is now working on bringing the remainder of his mother’s family and others to Canada in a process that began with relocating his grandfather from Kyiv a month before Russia’s invasion. He said he has been in contact with Canada’s United Nations ambassador, Bob Rae, on speeding up the visa process for refugees, and is also donating $50,000 to Ukrainian-based charitable foundations.

Just as he was bullied during a hazing incident during his rookie season in the Ontario Hockey League, Aliu sees Russian President Vladimir Putin doing the same to Ukraine: “You just can’t grasp how a human being cannot care about humans so much based on power and greed and ego.”

Long gone are the days Aliu was so ashamed of riding public transit he’d keep it a secret from his teammates, or the person who was too fearful to speak out on racism in fear of jeopardizing his career. He believes he is stronger for the adversity he has faced.

Aliu’s nickname, “Dreamer,” has taken on a deeper meaning over time. People initially began calling him that because Aliu was Nigerian, just like former NBA star Hakeem “The Dream” Olajuwon.

“I feel like this is a conversation, especially in the game of hockey, that’s never really been had at this level,” Aliu said. “And I’d like to say that I had a part in that coming out with my story and not really backing down from the establishment on wanting to make change. And I’ll continue to dream.” 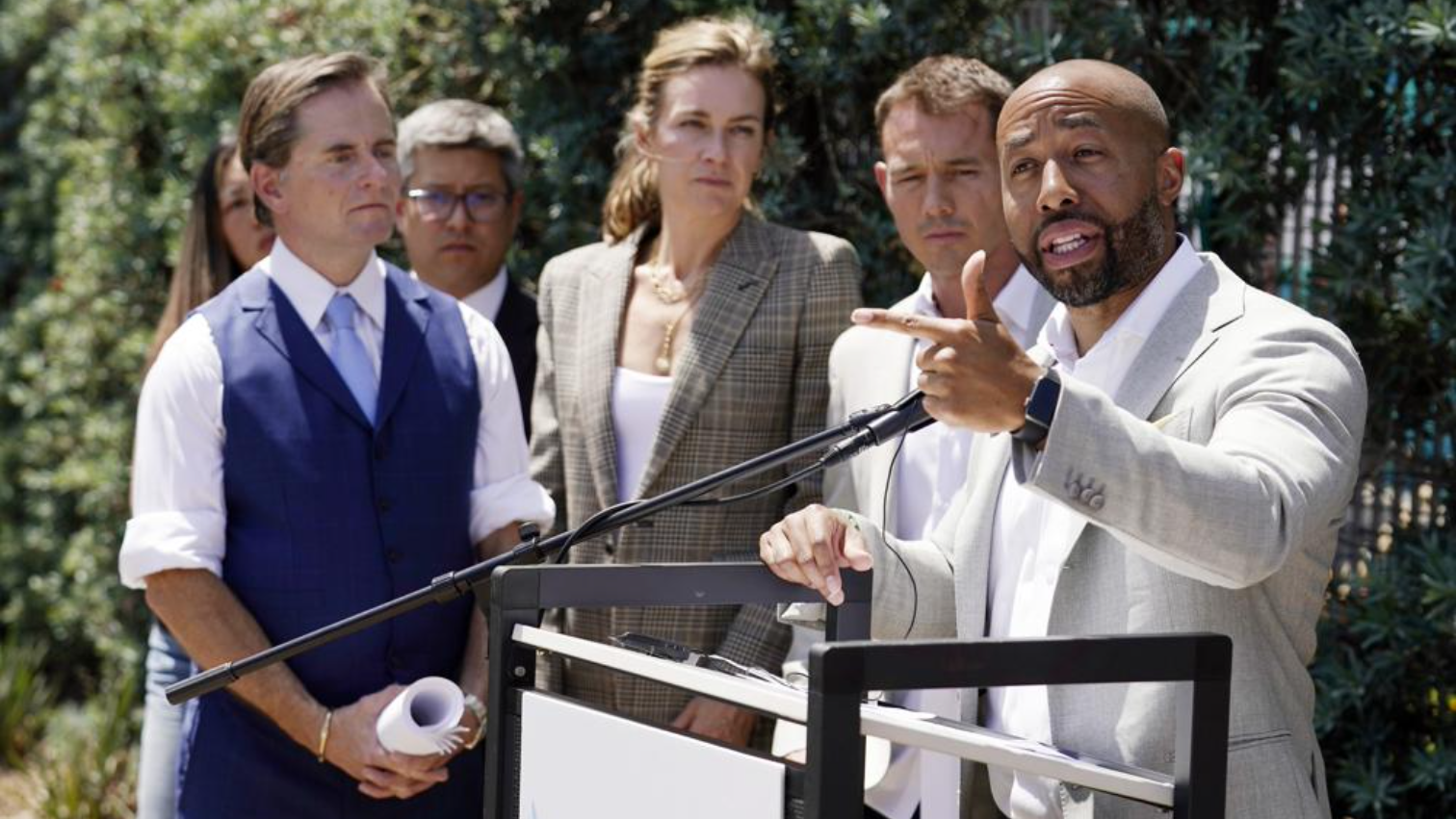 L.A. hospital sued for racism in death of Black mother